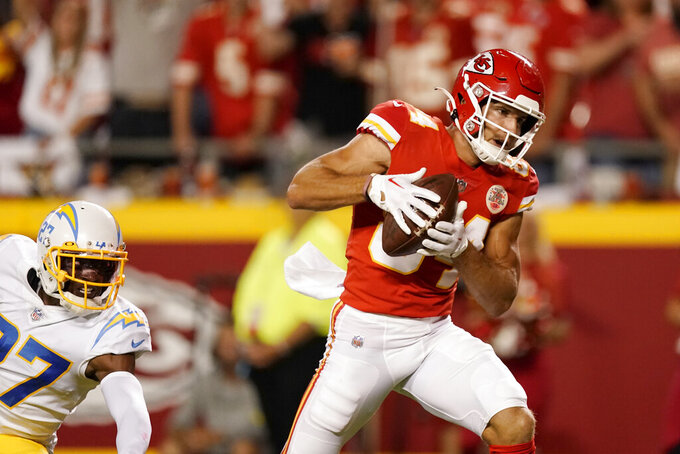 COSTA MESA, Calif. (AP) — J.C. Jackson is accustomed to being on top of his game and dominating opposing receivers. However, five games into his first season with the Los Angeles Chargers, Jackson is still trying to get up to speed.

The cornerback signed a five-year, $82.5 million contract with the Chargers after New England did not place the franchise tag on him. The transition has not been smooth.

Jackson underwent surgery on his right ankle in late August, two weeks before the start of the regular season, and missed two of the first three games. He has played the past two weeks, but has struggled most of the time.

Jackson isn’t using the ankle surgery as an excuse for his inconsistent play.

“My ankle is alright. I’m back practicing and playing with my team,” Jackson said Friday as the Chargers continued preparations for Monday night’s game against the Denver Broncos. “I’m playing through it, still rehabbing and treating it. It’s part of the game.”

Jackson’s 25 interceptions since the start of the 2018 season are the most in the league, which is why he has embraced the nickname Mr. INT. However, this is only the second time he hasn’t had an interception in his first three games played in a season.

Last year, Jackson made the Pro Bowl after leading the league with 23 passes defended and picking off eight passes, which ranked second.

Jackson has been targeted 17 times and allowed 12 receptions for 181 yards and two touchdowns. The 144.5 passer rating against Jackson is the second-highest in the league among players who have seen at least 17 targets.

One big reason for Jackson’s slow transition is that he is playing more zone coverage than before. According to the NFL’s Next Gen Stats, Jackson has been in zone on 53% of his 101 coverage snaps. In New England, he played man coverage at least 60% of the time in the past three seasons.

Hill also noted that Jackson is “going to mix it up, as a corner, but we know that his strong suit is getting up there and pressing.”

Jackson refuses to use the ankle surgery as an excuse and is more frustrated about his technique. As an example, he pointed to Amari Cooper’s 11-yard touchdown in the first quarter last week at Cleveland.

“He ran a great route, but I was playing off and had bad technique. I felt like I wasn’t in the right position. You can’t play that far off anyone that fast and quick,” he said.

Coach Brandon Staley said Jackson’s transition isn’t unusual and compared it to when quarterbacks leave for another team and have to learn a new offensive system.

“We brought him here to do what he does best. We’re not trying to change him, that’s for sure,” Staley said. “It’s just him getting out there with his teammates, him getting into rhythm, and playing his game.”

Jackson is optimistic that things will improve. He lauded the communication with the group in the back seven and feels like the learning process is beginning to speed up.

The biggest challenge for Jackson and the Chargers’ secondary will be limiting the explosive plays from the Broncos’ offense. Even though Russell Wilson has struggled, he has 15 completions of at least 25 yards, tied with Detroit’s Jared Goff for the league lead.

Denver receiver Courtland Sutton is third in the AFC in receiving yards (417). He has 41 catches of at least 25 yards since 2018, third among AFC receivers.

The Chargers (3-2) are looking for their first three-game winning streak since early last season, but have dropped four of their last six to the Broncos (2-3).

“I feel like our team is coming together. It should be a great matchup on Monday night. They’ve got some great receivers, but we have some great defensive backs, too,” Jackson said.