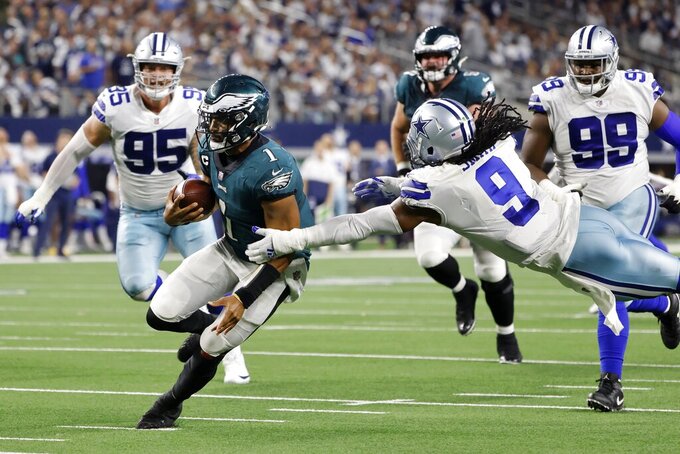 FRISCO, Texas (AP) — The Dallas Cowboys are releasing linebacker Jaylon Smith in what could be considered a cost-cutting move because of a guaranteed salary next season in the case of an injury.

Smith's role had been reduced after Micah Parsons was drafted 12th overall this year and the Cowboys moved free-agent pickup Keanu Neal to linebacker from safety. The move can't become official before Wednesday.

The decision won't save the Cowboys any money on Smith's $9.8 million salary cap figure this year, but protects them from his $9.2 million salary for 2022 becoming guaranteed if he gets injured.

The team said on its website that attempts to trade Smith were unsuccessful.

Dallas drafted Smith in the second round in 2016 knowing he wouldn't play as a rookie because of a significant left knee injury sustained in his final game with Notre Dame at the Fiesta Bowl.

After an up-and-down debut in 2017, Smith had his best season in 2018 with 150 tackles and career bests of four sacks and 13 quarterback pressures. It was the only one of his four full seasons when the Cowboys made the playoffs.

Smith signed a $64 million, five-year extension before the 2019 season. About $34 million of that contract was guaranteed.

Even with Neal out for a second consecutive game because of COVID-19 protocols Sunday against Carolina, Smith played just 28 snaps. Neal is expected to return from the COVID-19 reserve list this week against the New York Giants.