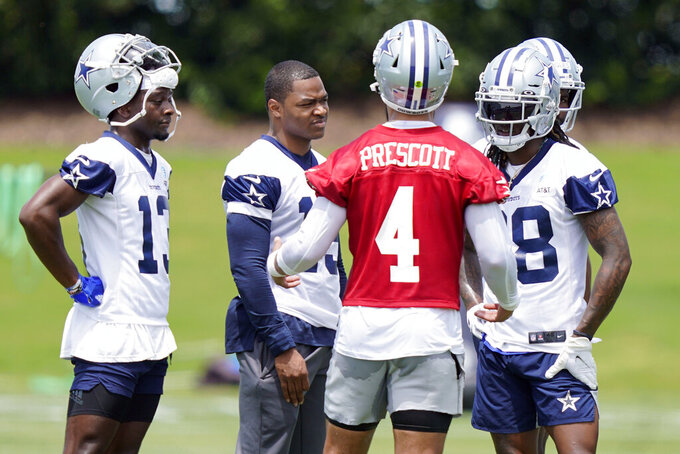 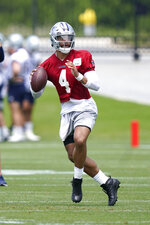 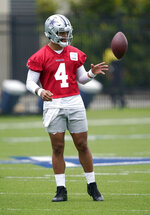 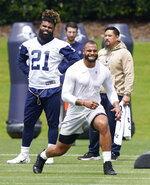 FRISCO, Texas (AP) — Dak Prescott finished the offseason with his most vigorous practice since the horrific ankle injury that ended his 2020 season.

Then the star Dallas quarterback tried to declare the injury issue dead.

“I’ve buried the injury,” Prescott said Wednesday after what ended up being the final practice of the mandatory minicamp for the Cowboys, who used the last of the three days for team bonding.

“I’ve buried it mentally," he said. "And I think you guys and a lot of people around have to help me and bury it as well as we move forward. Put that right on the tombstone.”

As for the date on the “tombstone,” Prescott says about a month ago, which means about seven months after he broke and dislocated his right ankle in a gruesome scene in Week 5 against the New York Giants.

“Somewhere around Cinco de Mayo,” he said. “Yeah, had a good Cinco de Mayo, was a little active and at that time maybe did some little dance moves and I felt like I’m ready to go. So that was the time that I said in my head, ‘The injury’s gone.’”

In reality, there are still plenty of questions for the player with the richest contract in the storied franchise's history, a $160 million, four-year deal signed in March. While the offseason work has steadily increased, Prescott didn't do 11-on-11 drills, in part to keep players from falling around that leg.

Coach Mike McCarthy said he expects the two-time Pro Bowler to be cleared for everything at the start of training camp, presumably in California on July 22 — roughly the nine-month mark since the injury.

“He hasn't missed anything that’s been slated,” McCarthy said. “We’re not naïve. It’s just like any player that comes back from injury, especially a major joint injury. The first year back there’s going to be some things you have to work through.”

After camp starts, Prescott will have the mental hurdle of his first play in a preseason game. All those feelings are likely to return Sept. 9, when the Cowboys open the regular season against Tom Brady and Super Bowl champion Tampa Bay.

Along the way, Prescott said he hasn't bothered with timelines. In fact, he made sure he didn't have any.

“One of my goals and missions when I first got hurt is, I said, ‘I’m not going to try to beat anybody’s timeline. I'm going to just go out here and work day by day and just try to get myself better,’” Prescott said. “Because I knew the amount of time I had before I actually need to be ready for the season.”

The scramble drills in offseason practices were important for Prescott to test his ankle, and the Cowboys did more of them. Prescott said that was more for the team's situational work than his ankle. But there's no question what was on everybody's mind.

“He definitely had some moments from workouts probably three, four weeks back where I definitely felt once we were able to see him move in the pocket, out of the pocket-type drills, scramble drills,” McCarthy said. “Physically I think he’s right where he needs to be.”

Both starting tackles also had season-ending surgeries last year. La'el Collins had a hip issue that kept him out all season, and left tackle Tyron Smith played two games before a neck injury shut down the seven-time Pro Bowler.

The blockers got to see the rehabbing side of the quarterback who replaced an injured Tony Romo in 2016 and never gave up the job while leading Dallas to the top seed in the NFC and winning NFL Offensive Rookie of the Year honors.

“The way Dak worked throughout the whole offseason, the way he pushed himself, the way he came back and is able to be on the field with everybody else right now, it's amazing,” Smith said. “It lights a fire under you to like, ‘Hey, push a little bit harder.’ If your quarterback is going to push like that, we got to push the same way or even harder for him.”

Prescott said he has been encouraged by improvement in his football movement from his workouts to minicamp. He also said he never worried about the leg during drills, and is now past the residual pain.

“I say that because with all that gone and none of those effects, that’s what allows me and helps me bury it,” Prescott said. “I don’t even think about it before practice, pre-practice, but still doing all the necessary things and being smart that I am still only seven months away from the injury.”

It's actually eight months, but who's counting? Maybe Prescott means it when he says he hasn't been.