Delayed surgery not a red flag but symbol of receiver's grit 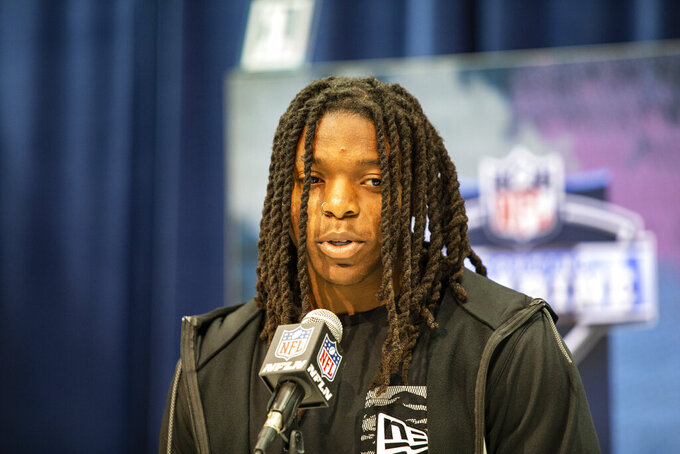 Laviska Shenault Jr. talks to the media at the NFL Scouting Combine on Tuesday, Feb. 25, 2020 in Indianapolis. (Detroit Lions via AP)

BOULDER, Colo. (AP) — A lingering core muscle injury prevented Laviska Shenault from showcasing his skills and speed at the NFL scouting combine, where the former University of Colorado superstar posted a slower-than-expected 4.58 seconds in the 40-yard dash.

What was instead on display in Indianapolis last week was Shenault's off-the-charts ambition, the same desire that drove him to play through pain most of last season.

Although Shenault was disappointed in his 40 time, Bilbo said Myers told him he was stunned Shenault ran as fast as he did given the injury.

Shenault will need about six weeks of rehab and recovery, meaning he'll miss CU's pro day later this month and he won't be able to work out for teams ahead of the April 23-25 NFL draft.

One of the most explosive athletes in football when healthy, Shenault could have avoided this scenario by undergoing surgery last fall when he got hurt.

"As an agent we always have to ask, 'Why didn't you have the surgery?' And he said ... 'Look, if I have an NFL career, God's going to bless me with that, but I want to be here for my teammates. This is what I signed up to go to Colorado for,'" Bilbo recounted Thursday.

Shenault said at the combine that he never would have opted to cut short his season.

"These guys grow up watching the combine. They want to be there, they want to experience that. He said, 'I'm going to get out on that field. I'm going to do what I have to do,'" Bilbo said. "And I think he actually tore it some more when he ran his 40 the first time. That's why he just kind of just shut it down, because Myers was like, 'Look, you're going to have to have the surgery regardless.'

“But he just wanted to get out there and do what he could do. And I was proud of him. It was a very selfless act.”

Todd McShay, NFL draft analyst for ESPN, said Shenault's disappointing 40 and delayed surgery won't affect his draft stock much if at all.

"I think it speaks to how competitive he is and how willing he is to go out and show what he can do," McShay said. "And that's the guy that when you talk to coaches on that staff who have been with him, that's what they know about him, is that he'll do anything. Put me on a reverse? Fine. Put me in the backfield? Great. Put me in the slot. Put me on the X, put me at Y, the Z, wherever you want me, Coach, I'll go and I'll compete.

"And I think sometimes and you see it with a lot of players, what makes you great also can be your demise," McShay said. "And I think because all these guys are so competitive and especially a player like Shenault, they want to go out and prove that they can do it and they think they're invincible. And we all did when we were 21, 22, 23 years old. But it sometimes catches up with you."

That said, McShay concurs with Bilbot that the lingering injury and the late surgery aren't that big of a deal.

"I think it's a minor setback, I really do," McShay said. "There's so much tape of him, there's so much versatility in his game that I don't think it's going to affect him greatly. I thought he was a second-round pick coming into the combine and I'll be surprised if we get to the start of the third round on Friday night if he's still on the board."

NFL Network draft analyst Daniel Jeremiah, who ranked Shenault as the 22nd-best overall prospect this year, agrees he'll be a second-rounder. Jeremiah had Shenault going to Green Bay at No. 30 in his pre-combine mock draft but swapped him out for Baylor senior Denzel Mims in his post-combine mock.

Jeremiah calls Shenault "arguably the best athlete in the entire draft class," not just among the deep group of wide receivers.

In addition to his muscular build, Jeremiah touted Shenault's versatility.

“He lined up everywhere in Colorado's offense -- out wide, in the slot, at running back and he even took snaps as a Wildcat quarterback. Shenault isn't a nuanced route runner, but he is a monster with the ball in his hands,” Jeremiah said.