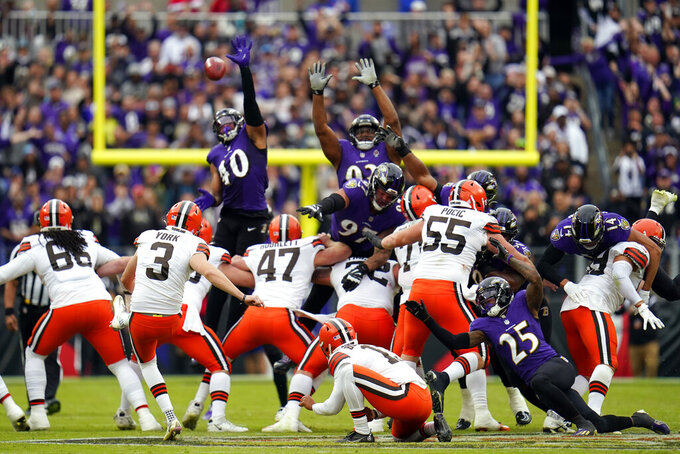 And yet, for the fourth week in a row, the struggling Browns found themselves reflecting upon the little things that went wrong following a very distasteful defeat.

Playing on the road Sunday against the AFC North rival Baltimore Ravens, Cleveland scored a touchdown on its opening possession. The Browns bottled up versatile quarterback Lamar Jackson throughout the afternoon and had a very good chance to take the lead during the closing minutes of the fourth quarter.

But an offensive pass interference call on an apparent touchdown started a miserable chain of events that included a pivotal false start and a blocked 60-yard field goal attempt.

The Browns (2-5) have dropped four straight, with three of those defeats coming by a total of seven points. Throw in a 31-30 loss to the New York Jets in Week 2, and no wonder coach Kevin Stefanski was shaking his head behind the podium in the basement of the Ravens' home stadium.

“Really disappointing and frustrating,” Stefanski said. “You play these games and you know they’re going to be close but you’ve got to find a way to win and we didn’t do it today. You work your tail off all week and go out there and play hard and don’t come away with a victory, it’s frustrating. We understand that there are things we need to do and not do in order to win.”

The Browns pretty much did what was necessary on defense, holding Jackson to a meager nine completions and 120 yards passing. Cleveland sacked the nimble quarterback three times and held him to 59 yards rushing on 10 attempts.

It wasn’t enough, in part because the Browns didn’t get their running game going until the fourth quarter and because they couldn’t protect their own quarterback well enough. Baltimore sacked Jacoby Brissett five times and jarred loose a fumble.

That was enough to offset a very nice statistical afternoon for Brissett, who went 22 for 27 for 258 yards.

“I think we did part of what we came out to do,” said Brissett, who’s done a decent job running the Cleveland offense while projected starter Deshaun Watson serves an 11-game suspension.

“Obviously the ultimate goal is to come out with a win. We came up short,” Brissett said. “It’s plays here and there. Definitely thought we had a chance at the end for sure.”

Yep, the Browns had a solid chance at the end after Brissett moved the team from its own 16 to the Baltimore 34. Then, he launched one of this finest throws of the season, a strike to Amari Cooper on the right sideline for a touchdown. Until it wasn’t.

The officials ruled that Cooper got separation by extending his arm just before the ball arrived, and the pass interference call backed the Browns back to the Baltimore 44.

“I didn’t see it, but tough call,” Brissett said, although Cooper did not complain about the flag during his postgame interview.

After the penalty, Brissett ran for 7 yards on third down to set up a field goal try for the tie. Then came a false start, and Stefanski lessened the distance between the center and the hold in order to give Cade York a shot at connecting from 60 yards out.

The kick was blocked, effectively snuffing Cleveland’s chance to end its losing streak and draw within a game of .500.

“When we go watch the film we’ll see a lot of guys making the plays that we needed them to make, answered the call in a lot of ways. We’ve got to find a way to make more and come out with a win. ”