Edwards, running game were key for Ravens against Browns 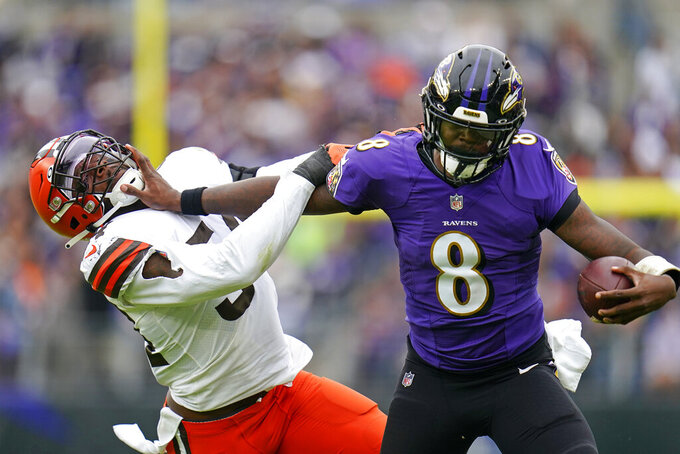 BALTIMORE (AP) — Roughly 21 months since he last played in a game that counted, Gus Edwards was on the field for the Baltimore Ravens.

Then he was in the end zone.

Edwards missed all of last season following a severe knee injury, and Sunday's 23-20 win over Cleveland was his first game back. His return would have been an uplifting moment no matter how much he played, but the Ravens used him extensively as part of a rushing attack that was crucial in the victory.

Although Nick Chubb and the Browns had the league's top-ranked running game entering the week, Baltimore won that battle 160 yards to 113. Edwards had 66 yards and two touchdowns on 16 carries.

Edwards, J.K. Dobbins and Justice Hill all missed the 2021 season with injuries, and the availability of those running backs has been sporadic this year. Dobbins returned earlier but is now on injured reserve, and Hill was back Sunday from a hamstring injury that had kept him out two games.

Edwards gave Baltimore (4-3) another option in short-yardage situations, and he scored his second TD on fourth down from the 1-yard line in the third quarter.

“We’ve got a lot of scat backs — fast, elusive backs,” quarterback Lamar Jackson said. “He can do both, but we’ve been missing the power, and it showed today.”

The Ravens forced two turnovers and lost one, improving to plus-five in that department this season. Baltimore's second takeaway was on Cleveland's desperate final play, but the first was a fumble recovery that gave the Ravens a short field and led to a touchdown in the third quarter.

The passing game is still stuck in low gear. Rashod Bateman returned from a foot injury and caught four passes, but Jackson completed only nine for 120 yards.

Star tight end Mark Andrews was held without a catch for the first time since Dec. 9, 2018.

“We’re certainly going to have games where we throw it way, way more than that,” coach John Harbaugh said. “Lamar did what he had to do to win the game. He managed the game, with the run game, he had so many good runs himself, he had some critical throws, protected the ball in the pocket against that pass rush. I told him after the game, ‘Don’t think you didn’t win this game for us, because you did.’”

Rookie punter Jordan Stout made a significant contribution. His 69-yard punt in the second quarter helped back Cleveland up to its own 12, and after the Browns punted back to Baltimore, a good return set up a field goal for the Ravens.

In the third quarter, the Ravens were facing fourth down from their own 6. Stout got off a 62-yard punt, and Cleveland took over on its own half of the field.

With 24 seconds left in the game, Stout got off a 50-yard punt to the end zone with no hiccups — at a time when a block or a shank may have been the Browns' best hope.

Baltimore's pass protection was not great in this game, allowing three sacks. Even the elusive Jackson needs time to throw if he's going to play his best.

Harbaugh said after the game that Dobbins has been dealing with a range-of-motion issue in his return from his knee injury, and he wanted to have a procedure that might speed up the process of solving that.

“Get the full range back in four to five weeks, something like that, six weeks,” Harbaugh said. “He didn’t want to go the slow road. If it doesn’t work 100 percent, then he’s kind of on the slow road again.”

Baltimore also released DB Daryl Worley from the 53-man roster and signed him to the practice squad.

44 — The number of rushing attempts by the Ravens, their most in a non-overtime game in nearly two years.

Baltimore doesn't have another home game until Nov. 20. The Ravens have a short week before playing at Tampa Bay on Thursday night, then a game at New Orleans followed by an open date.