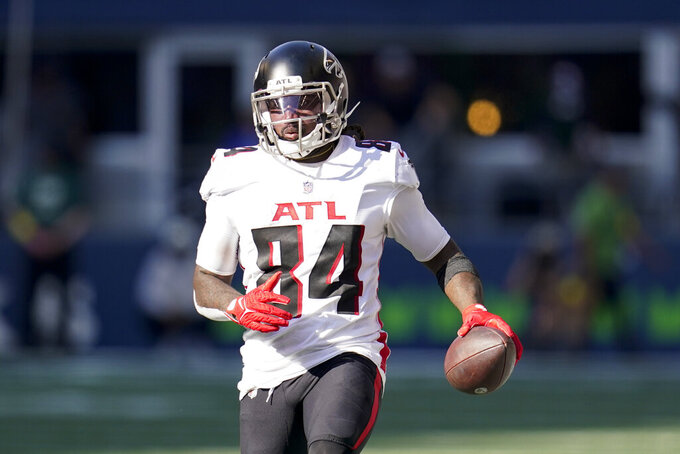 Atlanta Falcons running back Cordarrelle Patterson runs with the ball during the second half of an NFL football game against the Atlanta Falcons, Sunday, Sept. 25, 2022, in Seattle. (AP Photo/Ashley Landis)

OPENING LINE: Browns by 1½, according to FanDuel SportsBook.

TURNOVER DIFFERENTIAL: Browns plus-2; Falcons minus-2.

BROWNS PLAYER TO WATCH: RB Nick Chubb. The Georgia native returns home for the first time as a pro and as the NFL’s leading rusher with 341 yards. Chubb also has four TDs and he’s showing even better quickness and cutting ability than in recent years. With Cleveland’s defense dealing with several injuries, the Browns may try to control the clock with Chubb.

FALCONS PLAYER TO WATCH: QB Marcus Mariota has given the offense a new threat as a runner. His two rushing TDs are tied with Baltimore's Lamar Jackson for the most by a quarterback. Mariota also has been effective while throwing on the run. Mariota is averaging a modest total of 213 yards per game through the air, but he has rushed for 92 yards to rank second on the team behind Cordarrelle Patterson.

KEY MATCHUP: Falcons inside linebackers Rashaan Evans and Mykal Walker vs. Chubb. Evans and Walker combined for 21 total stops last week against Seattle and will be key to containing Cleveland's productive running game and Chubb, who picked up 86 of his 113 yards last week against Pittsburgh after initial contact.

KEY INJURIES: Browns star DE Myles Garrett will miss the game after sustaining several injures when he flipped his car during a single-vehicle accident early in the week. Garrett was downgraded to out on Saturday before the team flew to Georgia. ... DE Jadeveon Clowney (ankle), CB Denzel Ward (back, ribs), LB Jeremiah Owusu-Koramoah (groin) and DT Taven Bryan (hamstring) all missed time this week. ... The Browns lost starting LB and captain Anthony Walker Jr. (quadriceps) to a season-ending injury last week. ... Patterson is listed as questionable with a knee injury after having limited participation in Friday's practice and being held out Wednesday and Thursday. ... Falcons backup RB Damien Williams remains on IR with a rib injury, leaving rookie Tyler Allgeier to play behind Patterson.

SERIES NOTES: The Browns are 6-1 all time in Atlanta, and have won the past two meetings between the teams. ... Browns coach Kevin Stefanski is 8-2 in two-plus seasons against the NFC. ... Baker Mayfield and Matt Ryan were the team's respective QBs in the previous meeting four years ago.

STATS AND STUFF: The Browns beat the Falcons 26-14 in the most recent meeting in Atlanta on Nov. 23, 2014. ... While Chubb leads the league in rushing, Patterson is third with 302 yards. ... Only Hall of Famer Jim Brown (489 in 1963, 482 in 1958) has rushed for more yards in three games in Browns history than Chubb. ... Chubb's 176 rushing yards against the Falcons in 2018 is his career high. Chubb had a 92-yard TD run and 13-yard scoring reception in the game at Cleveland. ... Chubb's 24 games running for at least 100 yards are the most in the league over the past five seasons. ... TE David Njoku had a career-high nine catches last week. ... In his past two games, Browns QB Jacoby Brissett has completed 74% (43 of 58) of his passes and thrown three TDs. He's playing some of his best ball while filling in while Deshaun Watson serves his 11-game suspension for alleged sexual misconduct. ... Garrett (61 1/2) remains one sack shy of setting the team career record held by Clay Matthews (62). ... Browns WR Amari Cooper has had consecutive 100-yard games, the first Cleveland player to do that since Josh Gordon in 2013. ... Browns rookie K Cade York has missed two extra points. ... Falcons rookie WR Drake London has TD catches in two consecutive games. ... Patterson has set two career rushing highs in three games, including his 141 yards last week at Seattle. He set a personal high with 120 yards in Atlanta's season-opening loss to New Orleans. ... The Falcons have lost seven turnovers. Only two teams, New Orleans (nine) and New England (eight) have more. ... TE Kyle Pitts was held to four catches for 38 yards in the first two games of the season before breaking out with five receptions for 87 yards last week. ... Starting LG Elijah Wilkinson, who missed last week's game because of undisclosed personal reasons, returned to the team Wednesday and is expected to start. ... DT Grady Jarrett, who had one sack in 2021, leads Atlanta with 2 1/2 this season.

FANTASY TIP: Njoku's breakout last week (nine catches, 89 yards, 1 TD) could be a sign of things to come. If defenses decide to stack the box to slow down Cleveland's running game, Brissett will look for other options and Njoku is proving to be a dependable playmaker.

By Mark Anderson 31 minutes ago
By Teresa M. Walker an hour ago
By Arnie Stapleton 2 hrs ago
3 hrs ago
By The Associated Press 6 hrs ago