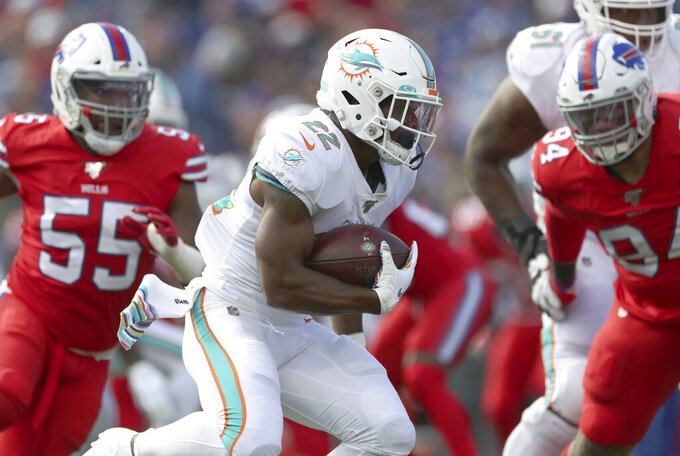 Week 8 is in the books and we've hit the halfway point of the fantasy football season.

If you're anything like me, you're going to need help off your waiver wire. Between Chase Edmonds getting hurt and Ty Johnson having a quiet game, there's a ton of work to do.

Making life just a little bit tougher, Week 9 is one with four teams on a bye: the Bengals, Falcons, Saints, and Rams. Let's take a look at some players who have long-term value and others we can stream because of good matchups.

Nick Foles is apparently targeting a Week 11 return to the Jaguars but guess what? It's Week 9. The Jaguars will have quite the decision to make when it comes to their quarterback situation, but Gardner Minshew is in a great spot this week against the Houston Texans. Minshew reminded us of his upside against the Jets, tossing for 279 yards and three touchdowns while adding 28 rushing yards. His rushing is actually an underrated asset for fantasy football. On the season, he ranks fifth among quarterbacks in rushing with 201 yards. In Week 8, Minshew faces the Houston Texans who are allowing the seventh-most fantasy points to quarterbacks this season. In fact, this defense has allowed at least three passing touchdowns in four straight games. Minshew is the top stream if your quarterback is on bye in Week 9. If Minshew is already owned in your league, turn your attention to Derek Carr. Carr has played well this season, completing 72.1 percent of his passes while averaging a career-high 7.7 yards per attempt. He's had multiple touchdown passes in four of his past five games and has a prime matchup against the Detroit Lions. The Lions defense has allowed eight passing touchdowns over their past two games and just allowed Daniel Jones to finish as the QB1 overall in Week 8. Carr is worth a look if you miss out on Minshew.

Desperate times call for desperate measures. That's where Sam Darnold comes in. Darnold has struggled recently with turnovers, mostly because his offensive line has been dreadful. The good news for Darnold is he faces the Dolphins a Week 9, a defense with the worst pressure rate in the NFL. They've allowed multiple touchdown passes in every game but one this season. It's Halloween week, which means we're all seeing ghosts in Week 9. For those of you in superflex leagues, now is the time to stash Broncos rookie Drew Lock. Joe Flacco is dealing with a herniated disk in his neck. As a result, Brandon Allen will start in Week 9, but it could be only a matter of time before the team turns it over to their second-round pick, Lock. Lock played four years at Missouri, throwing for 12,189 yards and 99 touchdowns.

We've been telling you to grab Mark Walton for weeks but in case you didn't, here's your final reminder. The Miami Dolphins have traded Kenyan Drake to the Arizona Cardinals and it looks as if they're turning things over to Walton. There was evidence of this back in Week 7 when Walton played a season-high 52 percent of the snaps, rushing 14 times for 66 yards. Drake leaves behind a 15 percent target share and Kalen Ballage struggles as a pass catcher. Walton could get around 15 touches per game moving forward, including some work in the pass game. Walton faces the Jets in Week 9, a defense that has allowed eight rushing touchdowns to running backs this season. From a winless team to an undefeated one, it's once again time to look at Raheem Mostert. The 49ers want to run the football, evidenced by their league-leading 57.1 percent rush percentage, and all Kyle Shanahan does is produce running backs for fantasy football. With Matt Breida banged up and the 49ers playing on a short week, Mostert is in play as a flex option against the Arizona Cardinals. He just rushed nine times for 60 yards in Week 8, including a 41-yard rushing touchdown. Mostert has 95 carries in his NFL and is averaging 6.4 yards per carry, proving his ability. The Cardinals also allowed Latavius Murray to go for 157 total yards and two touchdowns so it's a solid matchup. Walton is more of a long-term add while Mostert only has relevance if Breida is hurt.

While Todd Gurley has seven total touchdowns in seven games this season, it's clear he's not himself. He's averaging a career-low 3.9 yards per carry and 50.7 rushing yards per game and is on pace for just 32 receptions this season. While Darrell Henderson only has 29 rushing attempts this season, he's running more efficiently and is now playing more snaps. In Week 8, Henderson played a season-high 48 percent of the Rams snaps. The Rams have a bye in Week 9, but Henderson is one Gurley injury away from having RB2 value. Speaking of injuries, Derrius Guice has returned to the practice field for the Redskins and is eligible to return in Week 11 against the New York Jets. Under interim coach Bill Callahan, Adrian Peterson is averaging 19 rushing attempts over the past three games. I would imagine Guice once again takes over down the stretch as the Redskins see what they have in their younger players. Tre Carson is the final name to look at in deeper leagues as he led the Lions in carries (12) and rushing yards (34) in Week 8. It's not a great situation as the Lions have four backs involved but in those deeper leagues, you add any running back you can. That's Tre Carson.

If we're targeting Minshew for his matchup against the Houston Texans, let's remain consistent and look at one of his pass catchers. Chris Conley was superb in Week 8 with four receptions for 103 yards and a touchdown on seven targets. That's now back-to-back games for Conley where he's had at least seven targets. During that span, he has 21 percent of the Jaguars target share and 39 percent of their air yards. Considering Dede Westbrook is dealing with an injury, we should expect Conley to have a significant role once again in Week 9 against the Houston Texans. The Texans just allowed 10 receptions for 221 yards and two touchdowns to Oakland Raiders wide receivers in Week 8. In deeper leagues, you should also take a look at Josh Reynolds who is entering the bye week with the Rams. Teammate Brandin Cooks is dealing with his second concussion of the season and is expected to miss games. Reynolds stepped up in Week 8, hauling in three catches for 73 yards and a touchdown while playing 89 percent of the snaps. Last year Reynolds took over as a starter for the Rams when Cooper Kupp went down with a season-ending injury. From Week 11 on, he was WR35 so there is some value for Reynolds in this Rams offense.

Darius Slayton has been inconsistent but it's clear he does have a rapport with rookie quarterback Daniel Jones. That was on display in Week 8 against the Detroit Lions, going for two touchdown catches. Don't look now but Danny Amendola has gone for eight receptions in each of his past two games. The Lions passing attack ranks fifth in the NFL (282.7 passing yards per game). Amendola is going up against the Raiders in Week 9, a defense allowing the fourth-most fantasy points to opposing wide receivers. One final name to pay attention to is Alex Erickson of the Cincinnati Bengals. Like Josh Reynolds, Erickson is on a bye in Week 9 but he's been very involved in their offense. Over his past two games, Erickson is averaging 10.5 targets, seven receptions, and 117 receiving yards per game.

Most tight ends don't break out in their age 33 season but then again, Darren Fells isn't most tight ends. In Week 8, Fells caught all six of his targets for 58 yards and two touchdowns while playing a season-high 90 percent of the snaps. Without Delanie Walker in the lineup in Week 8, Jonnu Smith made the most of his opportunity. He led the Titans in targets (seven), receptions (six), and receiving yards (78) while scoring a touchdown. He played on 43 of 59 snaps and ran routes on 18 of Ryan Tannehill's 36 drop-backs. The final tight end to take a look at is the rookie first-round pick Noah Fant. In his first game since the team traded Emmanuel Sanders, Fant led the Broncos with eight targets or 25 percent of their target share. In Week 9, Fant will face the Cleveland Browns who have allowed four touchdowns to tight ends this season.

If you're looking for streaming defenses the top adds for Week 9 will be the Jets (at MIA), the Seahawks (vs. TB), and the Broncos (vs. CLE).