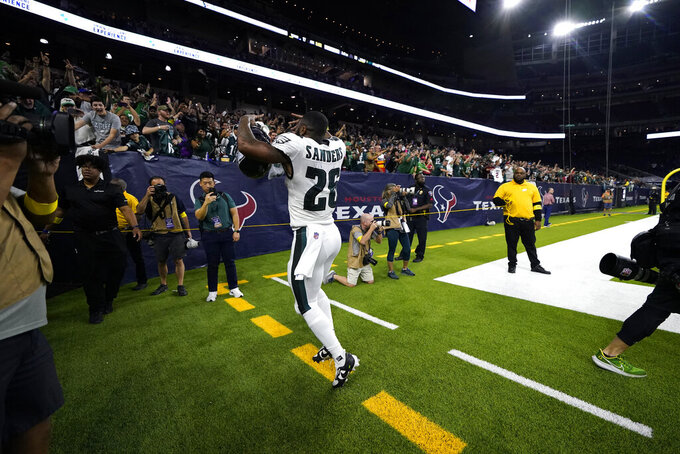 Philadelphia Eagles running back Miles Sanders (26) reacts to fans as he walks off the field after an NFL football game against the Houston Texans in Houston, Thursday, Nov. 3, 2022. The Eagles won 29-17. (AP Photo/Tony Gutierrez)

Of course, we have our studs, anchors, and the players we’re starting virtually no matter what. We don’t need anyone to tell us to start Josh Allen.

Ryan Tannehill was a game-time decision for Week 9, so his Week 10 return is possible. If he is deemed the starter, he is only 28% likely to be a QB1.

There aren’t many sure things at quarterback this week. Tier 2 is long, but that’s not the worst problem to have. First, a large Tier 2 means we still have options from which to pick.

Second, statistically speaking, we’re less likely to face a surefire quarterback from an opponent this week if only a handful of them exist.

Tom Brady, cumulatively, ranks as the QB13 this season. On a per-game basis, he is the QB22, ranking below Andy Dalton — believe it or not. Brady, though, is stepping into a matchup against the Seattle Seahawks at a neutral location.

Seattle ranks 20th against the pass, according to our opponent-adjusted metrics. Brady has averaged 296.0 yards and 1.3 touchdowns against four below-average opponents this season.

Since his return, Dak Prescott has faced two bottom-five adjusted pass defenses and has dominated them for 0.40 Passing Net Expected Points (NEP) per drop-back (the NFL average is 0.06). He has still been 0.24 per play better than expected in this two-game sample once accounting for opponents. The only issue is volume; Prescott has averaged just 27.5 drop-backs, leading to 228.5 yards and 1.5 touchdowns per game. Prescott, this week, faces a tougher test against the Green Bay Packers (12th in adjusted pass defense). What seems to matter more than the matchup is the game script and ensuring that the game stays close so that Prescott can throw more than he has needed to recently. Ultimately, the arrow is up on Prescott given a more likely back-and-forth game than he’s had recently.

The simulations aren’t believing in Russell Wilson too much this week. Wilson has just one top-12 quarterback finish (he was the QB3 back in Week 4). His opponent this week, the Tennessee Titans, made things tough for Patrick Mahomes in Week 9 and rank 13th in adjusted pass defense here at numberFire. Wilson has played 0.08 points per play worse than opponent expectation this season, via our expected points model, with a 38.6% passing success rate and a 9.2% sack rate. Those are terrible rates that don’t inspire much for a turnaround. Breakout potential exists coming out of a bye, but it is a very narrow path to success based on his struggles and this matchup. The Denver Broncos have some playable assets this week; Wilson isn’t one of the top priorities, however.

Jonathan Taylor didn’t practice at all last week. He’s initially projected for half of his usual workload. At full health, he’s in Tier 1. At half, he’s near the bottom of Tier 2. Without Taylor, Deon Jackson is rating out at 46%.

Aaron Jones left early in Week 9 with an ankle injury, but is expected to play.

Miles Sanders’ workload improved pretty notably in Week 9. Sanders played on 66.1% of the Philadelphia Eagles’ snaps, and he had 17 carries for 93 yards and a touchdown. While he didn’t earn a target, he ran 20 routes (64.5%). Few backs run that many routes. The Washington Commanders are a tough rush defense (top four in three key rush defense metrics), but are actually the worst team at defending receivers out of the backfield.

James Conner didn’t have a massive workload in his Week 9 return, but he did return to an impressive role: a 72.1% snap rate and a 62.5% route rate. That led to seven carries and five targets. Conner also accounted for a quarter of the available red zone opportunities within the Arizona Cardinals’ offense. The Los Angeles Rams are a top-10 running back defense, yet it’s unlikely you have many reasons to bench a back getting a 70-plus-percent snap rate.

It looked as if the Commanders’ backfield was going to belong to Brian Robinson after his quick turnaround, but Antonio Gibson has reclaimed the best role on the team. With J.D. McKissic out last week (he didn’t practice at all), Gibson had a 55.7% snap rate, besting Robinson’s 45.9% rate. The first-half split was even more telling: 71.0% to 32.3% in favor of Gibson. The Eagles are 26th or worse in adjusted fantasy points per carry, Rushing NEP per carry, and rushing success rate allowed to backs.

The Broncos’ backfield was set to be a bit of a fantasy football headache entering the season. Entering Week 10, it sure is — but not for the same reason we expected entering the year. Since Javonte Williams’ season-ending injury, the team has brought in multiple running backs to help solve the issue. While Melvin Gordon has the label of “starter,” Latavius Murray is mixing in on early downs, and now Chase Edmonds will see third down and two-minute drill work. There are startable Broncos this week — just not the running backs.

Deebo Samuel is projected for a half workload initially. At full health, he is 57% likely to be WR2 or better.

Keenan Allen isn’t projected to play. If he does, he’d land in the 46% range.

The Pittsburgh Steelers’ pass-catching situation got better for fantasy football after the trade of Chase Claypool.

Claypool vacates a 17.5% target share within this offense, and that’s pushing Diontae Johnson (26.6% target share) and George Pickens (15.0%) up the startable list. Pickens has been a top-24 fantasy receiver (in half-PPR formats) in three of the past five games already. Johnson hasn’t been better than the WR29 yet. The New Orleans Saints are just 23rd in adjusted fantasy points per target allowed to receivers.

Josh Palmer’s role in Week 9 was about as good as you could have hoped for. Palmer — without Mike Williams and Keenan Allen — had a 97.7% route rate and caught 8 of 10 targets for 106 yards. That didn’t include any red zone work, but did feature three downfield targets (10-plus air yards). Even if Allen is back, Palmer is a viable, high-end WR3 in fantasy formats. The San Francisco 49ers are 20th in adjusted fantasy points per target allowed to wide receivers and allow a catch rate over expectation of +3.9%, as well.

How tough is the situation for Courtland Sutton and Jerry Jeudy? Let’s dig in. First, though, we should make some adjustments for this offense. Tight end Greg Dulcich has been an impactful player since his debut in Week 6. Brett Rypien also started a game for the Denver Broncos in that span. So, it’s tough to trust the full-season sample.

In two games with Russell Wilson and Dulcich, here’s how the target shares have looked. Jeudy leads with a 27.5% target share (7.0 per game). Sutton is actually third (13.7%; 3.5 per game) behind Dulcich (15.7%; 4.0 per game). Again, the Titans are a tough defense overall, and Wilson is only a start-if-you-have to option. However, the Titans actually rank 32nd in adjusted fantasy points per target allowed to the position. Both Jeudy and Sutton could be fun fantasy starts for Week 10 if they’re needed.

David Njoku is expected to play in Week 10.

Greg Dulcich has stepped into a prominent role for the Broncos since his Week 6 debut. We already discussed his usage a bit when going over the receivers, but let’s put it in tight end-only terms: Dulcich, since Week 6, ranks 14th among tight ends in target share (17.9%) and in targets per game (5.7), but is third in air yards per game (70.9) and eighth in yards per game (60.7). The downfield volume is pretty elite for a tight end, and that gives him extra fantasy juice on a per-target basis. The Titans are below average (19th) against tight ends.

Before a bye, Dalton Schultz’s role was promising, and he now has had a week off to get healthier. In Week 8, Schultz had seven targets for a 26.9% target share and 74 yards. The Packers rank just 12th in adjusted fantasy points per target allowed to tight ends, so we should be able to lean on Schultz if needed.

Robert Tonyan’s role wasn’t quite what we would have hoped for in Week 9. He had four targets (a 10.3% share) for only 29 yards. He did get a red zone target and two downfield targets for an average target depth of 11.5. The Packers’ pass-catching situation is pretty thin, yet it’s worrisome that Josiah Deguara (31.8% route rate) and Marcedes Lewis (20.5%) are threats to keep Tonyan (40.9%) from being the clear top tight end for the Packers. He’s not a priority start even with the receiver injuries.