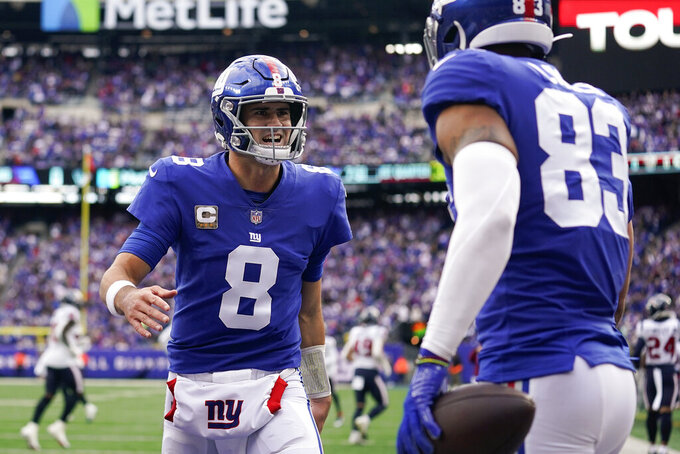 Of course, we have our studs, anchors, and the players we’re starting virtually no matter what. We don’t need anyone to tell us to start Justin Jefferson.

Both Kyler Murray and Matthew Stafford are question marks entering the week. Murray would be a low-end Tier 1 play if he starts; Stafford is a priority sit even if he plays.

We are projecting Taylor Heinicke to start again for the Washington Commanders.

Daniel Jones steps into one of the best possible fantasy matchups for opposing quarterbacks this week against the Detroit Lions. Detroit ranks 30th in composite quarterback stats and is 31st in adjusted pass defense, according to numberFire’s metrics. Jones has played three matchups against teams in the bottom eight in adjusted pass defense, but hasn’t dominated them with his arm (156.7 passing yards and 1.0 touchdowns per game). He does, though, average 66.3 rushing yards and a rushing touchdown in them. Although he’s one of the better streaming options of the week, he still doesn’t rate as a can’t-miss option even in a dominant matchup.

Jimmy Garoppolo has had a pretty high floor on a game-to-game basis this season. He has generated at least 15.9 fantasy points in five straight games, but hasn’t reached 19.0 yet this season. This week, he’ll face the Arizona Cardinals, a team ranked 14th in adjusted pass defense. Garoppolo, against teams ranked between 11th and 20th this season, has averaged 265.3 yards and 1.3 touchdowns for 17.7 fantasy points. He’s unlikely to win you your week, yet he’s probably not going to lose it for you, either.

Jared Goff remains on the cusp of start-able territory. The New York Giants pass defense does rank 18th in yards per game allowed, but is only 24th in adjusted passing efficiency based on the underlying data, so that helps a good bit. Goff has made the most of three matchups against pass defenses ranked 23rd or worse. In those starts, Goff has averaged 311.7 yards and 2.0 touchdowns per game for 0.45 Passing Net Expected Points (NEP) per drop-back — 0.33 points per play better than what those defenses allow outright. He’s averaged just 223.7 yards in games against tougher competition, so this is a good week to deploy him if you need him.

The Ravens backfield is projected as a split between Gus Edwards and Kenyan Drake.

Ezekiel Elliott is projected to play after getting in limited practices all of last week.

Can we go back to trusting Najee Harris after a 20-carry game? I don’t think it’s quite that easy. The Pittsburgh Steelers played from ahead last week, and even though the workload was there, the production was somewhat still muted. Harris put up 99 yards (16.4 over expected, according to NextGenStats) and didn’t catch his lone target. Harris split 26 routes evenly with Jaylen Warren (36.1% apiece). This week, the Steelers are underdogs again against a mid-range rush defense. Although you can play Harris over a lot of other options, the scaled-back snap rate (59.5%) keeps him well out of Tier 1 conversation despite the volume from a week ago.

Further, Harris is dealing with knee discomfort that isn’t expected to change his workload — but also implies he won’t see unlimited work, either.

Can Devin Singletary take advantage of an elite rushing matchup? The Cleveland Browns rank 32nd in Rushing NEP per carry and adjusted fantasy points per carry allowed to backs, and he’s coming off a two-touchdown game. The issue, though, is that Singletary had only 47 rushing yards on 13 carries and just two targets on 27 routes last week.

He’s on the field, his offense is great, and the matchup is elite — yet he’s just barely a mid-range Tier 2 play. Don’t bench someone with a better workload for Singletary.

In Week 10, we saw Brian Robinson and Antonio Gibson each score on the ground while splitting snaps 51.9% to 48.1%, respectively. Robinson turned 26 carries into 86 yards; Gibson had 14 carries and three targets (with a 59.4% route rate) for 58 scrimmage yards. The team’s offensive volume was very concentrated toward each in Week 10, but if we open up the sample to the past two weeks without J.D. McKissic out, neither is averaging more than 62.0 scrimmage yards. You can do worse —just don’t chase the production from last week, either.

I usually gloss over the Tier 1 options completely because they aren’t priority sits unless your league is small or your roster is flawless, but I will check in on Christian McCaffrey in terms of how it pertains to Elijah Mitchell.

Last week, with Mitchell back in the lineup, McCaffrey played on 64.3% of the San Francisco 49ers’ snaps. He’s a start no matter what. But there was a lot of room left over for Mitchell, too. Mitchell played only a 35.7% snap rate, but had an otherworldly 80.0% opportunity-per-snap rate. Basically, when he was on the field, Mitchell got the ball. That included a 53.8% red zone share (seven carries), while McCaffrey had four red zone carries (30.8%). Plus, Mitchell closed out the game. In San Francisco’s offense, Mitchell can be a low-end flex option as a player who has a claim to one of the best touch-per-snap rates in the NFL.

Jerry Jeudy and Mecole Hardman have half projections initially. Keep an eye on their statuses throughout the week.

Keenan Allen and Mike Williams will practice this week, though that does not mean they’ll play. If either plays, they’re high-end Tier 2 options.

Things were better for Michael Pittman in Week 10 than in recent weeks. That’s relevant because of the Indianapolis Colts’ coaching and quarterback changes. Pittman had nine targets in Week 10, but generated only 53 yards on them with a below-position-average depth of target of 7.6 yards. It’s not easy to write off a 33.3% target share, though. That’s especially true when he enters a game in which the Colts are projected to trail. That said, in starts by Matt Ryan, Pittman’s 10.0 targets (a 24.9% share) have led to only 75.4 yards and a single touchdown.

Though that’s a very start-able stat line, the ceiling seems capped with how this passing offense is playing.

The fantasy breakout by Justin Fields has not necessarily transferred over to Darnell Mooney’s production. Mooney, since Week 5 while Fields has finished as QB13 or better in each game, has averaged only 6.7 targets and 57.2 yards for 9.1 half-PPR points. Mooney, on the full season, has just one week inside the top 20 in fantasy scoring at the position. The matchup is ripe for Mooney, at least.

The Atlanta Falcons are 26th in adjusted fantasy points per target allowed to the position and allow a catch rate over expectation of +4.4% to receivers this season.

Rondale Moore’s usage has been great in recent games. His target share has been at least 30.3% in consecutive games (and was 37.1% last week). Now, Zach Ertz is out, so Moore’s volume should be quite secure. Moore faces a solid San Francisco 49ers defense, but they’re actually only 23rd in adjusted fantasy points per target allowed to the position. His low average depth of target (5.3 yards) gets him some easy looks. The floor is there from the volume, and a ceiling can come from that much volume, too.

What can we do with the Los Angeles Rams receivers without Cooper Kupp? Well, after Kupp left the game in Week 10, the target distribution favored tight end Tyler Higbee (four), Van Jefferson and running back Kyren Williams (three), and Ben Skworonek (two) on passes from John Wolford. Wolford, in his start last week, played 0.24 Net Expected Points per play worse than expected, based on his matchup. He was OK from a success rate standpoint (48.7%), but we likely can’t plug in any receivers even when we remove Kupp’s massive 31.0% target share from the equation — even if Stafford plays.

Mark Andrews and David Njoku are projected to return.

The injury to Jerry Jeudy didn’t directly benefit Greg Dulcich last week (four targets for 11 yards — a 15.4% target share). However, Jeudy’s injury (even if he plays this week) has to benefit Dulcich long term. Dulcich, in his active games, has a 15.6% target share, but a 20.4% air yards share and a 25.0% red zone target share. The Denver Broncos face a Las Vegas Raiders team that is last in adjusted fantasy points per target allowed to tight ends.

Cole Kmet is really hard to evaluate right now. If you look solely at his fantasy production, then he’s the overall TE1 since Week 8 despite seeing only 15 targets in that span.

He’s scored five times in three games with an average of 42.0 yards per game, which explains the production. He’s got a 22.1% target share in a rush-first offense and is wildly overperforming. The Falcons are 10th in adjusted fantasy points allowed to tight ends, so just be aware of the bust potential from someone being carried solely by touchdowns.