Fields continues to signal he could be right QB for Bears 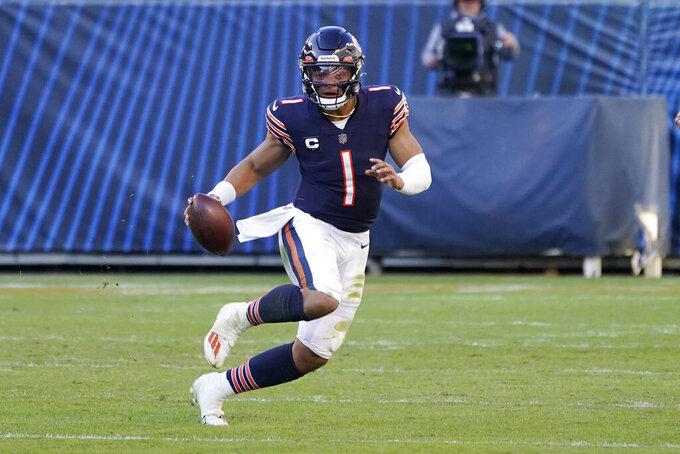 Chicago Bears quarterback Justin Fields runs the ball during the second half of an NFL football game against the Miami Dolphins, Sunday, Nov. 6, 2022 in Chicago. (AP Photo/Charles Rex Arbogast)

LAKE FOREST, Ill. (AP) — Justin Fields stepped up as the pocket collapsed around him, threw a pump fake and hopped before taking off.

Fields was looking for receiver Darnell Mooney. Instead, he tucked the ball in and broke a few tackles as he sped up the left side on the way to a highlight-reel touchdown run.

“I was about to throw the ball to Darnell, but I guess he thought I was scrambling already, so he had turned around,” Fields said Wednesday. “Once I saw that, I tucked the ball down and ran. Instincts took over from there.”

Fields' 61-yard scoring scramble was the longest run by a Bears quarterback and the highlight of a record performance in a 35-32 loss to Miami last week. He'll try to build on it when the Detroit Lions visit on Sunday.

Fields had been showing signs of progress in recent weeks. His performance against Miami was at a different level.

Fields ran for 178 yards — the most by an NFL quarterback in a regular-season game since at least 1940. He also became the first player since at least 1950 with at least 150 yards rushing and three TD passes in a game. And on Wednesday, he was announced as the NFC Offensive Player of the Week.

“You see some of those plays from the field level and watch what he does to pull away from people, I think that’s pretty special,” said coach Matt Eberflus, who's in his first season in Chicago.

“He’s certainly a lot faster when you see it in person than I thought, for sure. He’s strong. That’s what I didn’t know. I didn’t know how strong he was in terms of hanging in the pocket, being able to move guys off of him and be able to stay alive.”

Fields showed flashes of his potential during a shaky rookie season last year after the Bears traded up under former general manager Ryan Pace to draft him with the No. 11 overall pick. As recently as a few weeks ago, there were still big questions about whether Fields was the one to solidify a position that has long been a sore spot in Chicago.

He got off to a rough start, was ranked at the bottom of the league in passer rating. But in recent weeks, things have turned around in a big way.

In the past five games, has thrown for 851 yards, completing 76 of 120 passes, with eight touchdowns with two interceptions. He also has rushed for 455 yards and three TDs in that time.

Is it because of a change in scheme? His own growth?

The Bears tweaked their game plan during a mini-bye following an ugly Thursday night loss to Washington in Week 6, moving the pocket more and designing runs for their quarterback. It paid off the following week in a surprising Monday night win at New England.

Fields threw for 179 yards and a touchdown in that game. He also ran for 82 yards and a score, helping the Bears beat the Patriots 33-14.

He has continued to progress since then.

“Now you’re just seeing the big splash plays on the field," tight end Cole Kmet said. "He takes off man, it’s special, so it’s pretty fun to watch. When you’re on the field you just get out of the way and let him do his thing. Yeah, he’s special when he’s got the ball in his hands, for sure.”