Getting receiver A.J. Brown was highlight of Eagles' draft 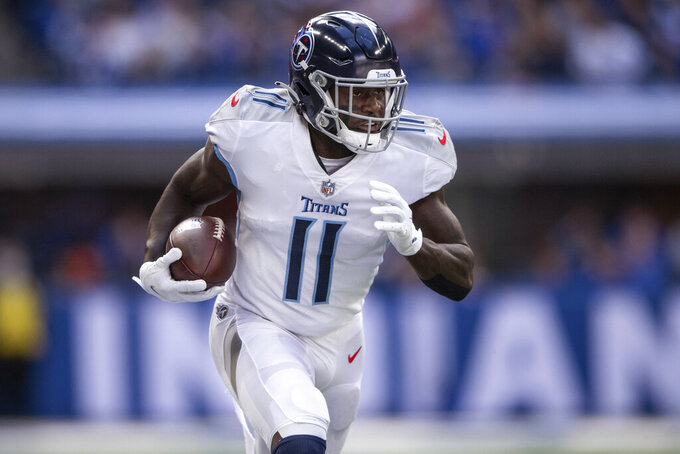 FILE - Tennessee Titans wide receiver A.J. Brown (11) turns upfield after a catch on the way to a 57-yard touchdown during an NFL football game against the Indianapolis Colts on Oct. 31, 2021, in Indianapolis. The Titans traded Brown to the Philadelphia Eagles to move up to No. 18 overall and selected Arkansas' Treylon Burks as his replacement. (AP Photo/Zach Bolinger, File) 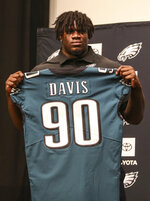 Eagles coach Nick Sirianni was halfway through watching one game of film on A.J. Brown when he turned to general manager Howie Roseman and said he’d seen enough.

“Nick went like this: ‘I’m good, I’m good. You guys need anything? I’m going to go get something to eat,‘” Roseman said.

Brown was so impressive that Philadelphia traded the 18th overall pick in the NFL draft and a third-rounder to Tennessee to get him. Acquiring the 2020 Pro Bowl wide receiver was the highlight of the draft for the Eagles, who also traded up two spots in the first round to select Georgia defensive tackle Jordan Davis with the 13th pick.

They also got Davis’ teammate, linebacker Nakobe Dean, in the third round after medical concerns caused him to slip out of the first round. Nebraska center Cam Jurgens was Philadelphia’s pick in the second round.

Trading a first-round pick for Brown means the Eagles have spent a first-rounder on wideouts three straight years. They drafted Jalen Reagor in 2020, but he hasn’t lived up to expectations. They selected Heisman Trophy winner DeVonta Smith 10th overall last year and he had a promising rookie season.

There’s no projecting for Brown. He’s a proven talent who has had 185 receptions for 2,995 yards and 24 touchdowns in three seasons with the Titans. The Eagles gave him a $100 million, four-year contract with $57 million guaranteed upon completing the trade.

“We finished watching the tape, but it doesn’t take long when you put the tape on to figure out what you got there,” Sirianni said. “This is one of the stronger receivers in the NFL. I was on the opposite sideline of him twice a year in the 2019 and 2020 seasons. So, I saw it up close and personal, and then obviously we did our due diligence on tape.

After entering the draft with 10 picks, the Eagles ended up taking five players following several trades. They finished up Saturday by selecting Kansas linebacker Kyron Johnson and Southern Methodist tight end Grant Calcaterra in the sixth round.

“I’m willing to play wherever the coaches are willing to put me,” said Johnson, who can play edge rusher or off-ball linebacker. “They can put me in inside, D-end, outside. I’m just ready to play.”

Calcaterra caught41 passes for 637 yards and nine touchdowns from 2017 through 2019 at Oklahoma before retiring from football because of multiple concussions. He returned last fall at SMU and had 38 catches for 465 yards with four TDs.

“I had a couple concussions when I was at Oklahoma, really minor concussions,” Calcaterra said. “I didn’t have a whole lot of knowledge about concussions. I just knew, obviously we all know there’s a big stigma around concussions in football. So that’s what led me to step away from the game.

"As (far as) coming back to football, really it’s just my passion for the game. Ever since I’ve been a kid, I’ve only seen myself as a football player. It’s all I’ve ever wanted to do. That’s who I am. I’m a football player. I have played my whole life. Playing in the NFL is a dream of mine that I’ve always had. I wanted to take one shot at it, and I’m blessed to be in this position and super grateful that the Eagles saw something in me to pick me today."

Johnson, Calcaterra and Jurgens provide depth. Dean has a shot to play right away. He said his pec injury doesn’t require surgery and he’ll participate in the upcoming rookie camp.

Davis should make an immediate impact on a strong defensive line playing along with six-time Pro Bowl tackle Fletcher Cox and Javon Hargrave on the interior.

“I think also sometimes people talk about how much he has potential more than production, but I think this guy was top-10 in Heisman voting, Outland Trophy winner,” Roseman said of Davis. “This was a dominant college player, too, for a dominant college defense. So excited to add him.”