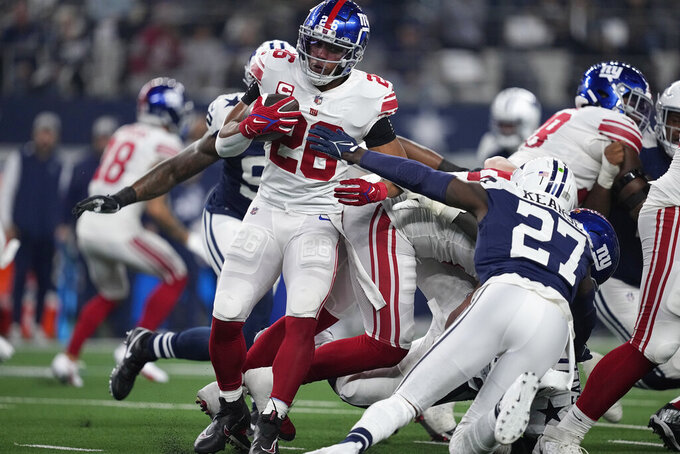 EAST RUTHERFORD, N.J. (AP) — The New York Giants have had a simple formula for success under first-year coach Brian Daboll.

When they can run ball well, throw it on their terms and play good defense, they’ve won seven times in 11 games.

When they don’t, they lose. They are on one of those bad runs now. They have lost three of their last four games and they have been held to 90 rushing yards or fewer in defeats to Seattle, Detroit and Dallas.

The Giants have averaged nearly 177 yards rushing in their wins and 106 in their losses.

If they want to make the playoffs for the first time since 2016, the Giants will need to reestablish the run, starting Sunday against Washington (7-5). The Commanders have won six of their past seven games.

There has been speculation on why the running game has not produced lately. It starts with injuries.

Tight end Daniel Bellinger (eye) and rookie right tackle Evan Neal (knee) were injured in a win over Jacksonville on Oct. 23 and haven't played since. They should return this week. Both are excellent blockers.

Opposing defenses also have focused recently on putting extra players near the line of scrimmage to stop Saquon Barkley, who is 8 yards shy of hitting the 1,000-yard mark for the first time since 2019.

Offensive coordinator Mike Kafka also noted Wednesday that defensive ends are being more vigilant to prevent quarterback Daniel Jones from running. Jones caught a lot of teams off guard early in the season with his naked bootlegs and his scrambling ability. His 451 yards rushing is a team single-season record in the Super Bowl era.

Washington coach Ron Rivera said the Seahawks, Lions and Cowboys did what they had to do to slow down the Giants' running attack. He would not discuss specifics.

Giants right guard Mark Glowinski, a seven-year veteran, said the running game works when an offensive line can find ways to get a “hat on a hat” and win individual battles.

“We can control what happens,” he said. “Other times, we can't control what’s going on, but we just have to have answers for the things that they do.”

Much of the responsibility for the run falls on Jones. The fourth-year quarterback has to be able to recognize what defenses are presenting and adjust, whether by running a play to a different side or checking out of it and throwing a pass.

“I think it just comes down to executing and making sure we’re putting ourselves in a good position each play to execute — we’re doing our jobs,” Jones said.

Jones scoffed at the suggestion that Barkley is worn down because the Giants have used him so much. Barkley has 224 carries. Jones said Barkley is playing well despite being held to 61 yards on 26 carries in the past two games.

Kafka said a team can't simply go into a game and say it is going to run the ball.

“You go back and you trust what they put on tape and trust that your study and your prep is correct,” Kafka said. “Then you get into the game and the flow of the game and you got to adjust, whether it’s by scheme, personnel, formation, the plays. Those are things that we talk about in and out of (each) series.”