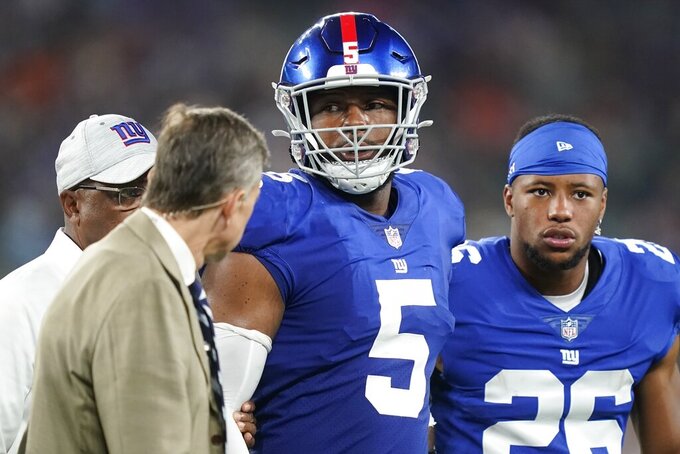 New York Giants' Saquon Barkley (26) checks on Kayvon Thibodeaux (5) as he is helped off the field after getting hurt during the first half of a preseason NFL football game against the Cincinnati Bengals, Sunday, Aug. 21, 2022, in East Rutherford, N.J. (AP Photo/John Minchillo)

Coach Brian Daboll said Monday that No. 5 overall pick in the draft was being listed as day to day and he hopes to have him back on the field as soon as possible.

It's too early to say whether Thibodeaux will be ready for the season opener on Sept. 11 in Tennessee against the Titans.

Daboll also got bad news on fellow rookie linebacker Darrian Beavers, the team's sixth-round pick. The Cincinnati product tore the ACL in his left knee in the third quarter of the 25-22 win Sunday night at MetLife Stadium and he will not play this season.

Veteran placekicker Graham Gano sustained a concussion attempting to make a tackle on a 73-yard kickoff return by Chris Evans in the second quarter. Daboll said the Giants may have to bring in a placekicker to handle the workload this week rather than rely on punter Jamie Gillan.

Gillan handled all the kicking duties in the second half. He made a 31-yard field goal out of the hold of safety Julian Love and had three of his four kickoffs go for touchbacks.

Thibodeaux is a freakish talent with size, speed and strength. He has quickly moved into the starting line in coordinator Wink Martindale's defense as a bookend edge rusher with Azeez Ojulari.

Veterans Jihad Ward, Oshane Ximines and free agent North Carolina rookie Tomon Fox will be given opportunities to replace him.

“KT been doing everything we asked him to do since he’s been here, being a good teammate and he’s worked extremely hard,” Daboll said. “So certainly, you never want to miss time, but he has the right attitude, the right approach. He’ll rehab as hard as he can and be ready to go when he’s ready to go.”

Thibodeaux was hurt when he was hit on the right knee on a cut block by Bengals tight end Thaddeus Moss on a running play from the Giants 15. Moss lined up on the left side of the Cincinnati line and came across to the other side of the line to make the block.

“Those are tough blocks," Daboll said. “The blocks that are coming from across the line of scrimmage, within the tackle box. You've got to see it, then you got to do a great job of trying to play with your hands. So it’s unfortunate that KT went down. But that’s part of the game.”

The Giants have a joint practice with the Jets on Thursday and the teams will close out the preseason on Sunday night with a game at MetLife Stadium, the home stadium for both teams.