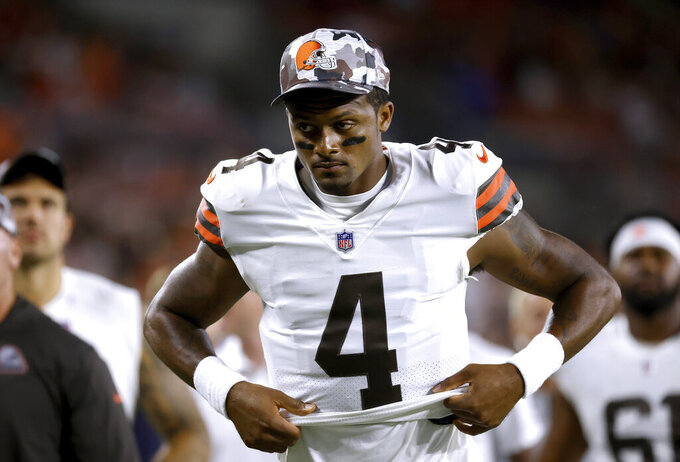 FILE - Cleveland Browns quarterback Deshaun Watson walks off of the field during an NFL preseason football game against the Chicago Bears, Saturday Aug. 27, 2022, in Cleveland. NFL Commissioner Roger Goodell said suspended quarterback Watson has met the requirements of his settlement with the league to this point after being accused of sexual misconduct by two dozen women. (AP Photo/Kirk Irwin, File)

CLEVELAND (AP) — NFL Commissioner Roger Goodell said suspended Cleveland Browns quarterback Deshaun Watson has met the requirements of his settlement with the league to this point after being accused of sexual misconduct by two dozen women.

Watson is serving an 11-game suspension for violating the league's personal conduct policy. On Aug. 18, the league, which had appealed a six-game ban rendered by an independent arbitrator, settled with the NFL Players Association on Watson's penalty.

Watson agreed to pay a $5 million fine and undergo mandatory counseling and treatment before he could apply for reinstatement. The three-time Pro Bowler returned to Cleveland's facility last week, but can't practice with the Browns (2-4) until Nov. 14.

At the owners' meetings in New York on Tuesday, Goodell said he was satisfied Watson was abiding by the agreement.

Last week, another woman in Texas filed a civil lawsui t against Watson, accusing him of forcing her to have sex with him following a massage therapy session. Watson previously settled 23 of 24 lawsuits with another one dropped.

Goodell was asked if the new lawsuit affects Watson's status.

“As far as any additional (allegations), we obviously will follow all of those,” Goodell said. “If there’s new information, we’ll take that into consideration, but we’ll see as time goes on.”

Watson was back inside Cleveland's headquarters last week for the first time since his suspension began on Aug. 30. He's permitted to attend team meetings, work out in the weight room and interact with teammates and coaches.

As long as he fulfills the agreement, Watson will be able to practice on Nov. 14, re-join the roster two weeks later and play on Dec. 4 in Houston against the Texans, who traded him to Cleveland in March for three first-round draft picks.

During his suspension, Watson has been training with a private quarterback coach in suburban Cleveland.

Two grand juries declined to indict the 27-year-old Watson on criminal charges. He has maintained he never harassed or assaulted any women.