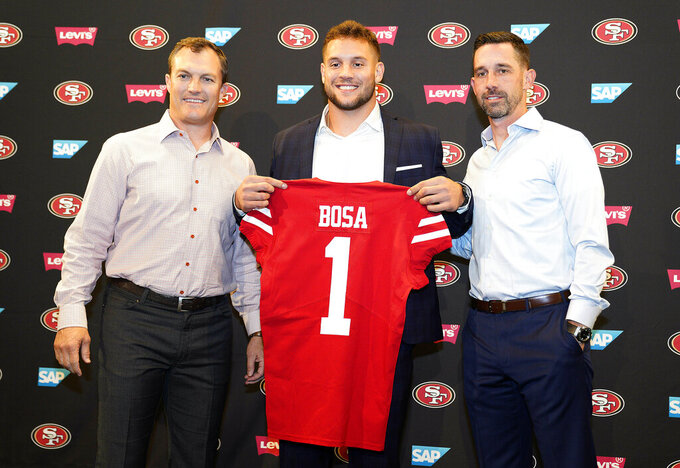 SANTA CLARA, Calif. (AP) — Looking to add talent, depth and competition at several positions, the San Francisco 49ers felt they met all three objectives with their eight selections in the NFL draft.

With high picks in every round each of the first two days, the 49ers obtained prospects that could make a difference on both sides of the ball for a team that won 10 games combined during the first two years general manager John Lynch and coach Kyle Shanahan have guided the franchise.

"You try to improve your team wherever you can," Shanahan said Saturday. "It's not the easiest thing. We were in some good draft spots this year where we could draft to add players better than the guys we had."

After trading down in the fourth round, the 49ers addressed a position where they'd sustained their biggest loss during free agency in March. San Francisco then drafted for depth with its fifth-round pick and each of its three selections in the sixth round.

The 49ers acquired one of the draft's premier prospects in Ohio State defensive lineman Nick Bosa with the No. 2 overall pick, then addressed their lack of playmaking talent at wide receiver by selecting South Carolina's Deebo Samuel (second round, No. 36 overall) and Baylor's Jalen Hurd (third, No. 67) with their Day 2 picks.

San Francisco's Day 3 picks were highlighted by the selection of Utah punter Mitch Wishnowsky in the fourth round (No. 110). The 49ers added two sixth-round selections from Cincinnati when trading down from the No. 104 pick, taking Vanderbilt offensive tackle Justin Skule and Virginia cornerback Tim Harris with those picks.

The 49ers also added Stanford tight end Kaden Smith with their sixth-round pick (No. 176) and Arkansas linebacker Dre Greenlaw (No. 148) with the fifth-round selection the team received when San Francisco traded linebacker Dekoda Watson and a sixth-round pick to the Denver Broncos.

For a team needing help to shore up one of the NFL's weakest defensive backfields, the 49ers instead used their first selection Saturday on a specialist, taking Wishnowsky after trading down with the Bengals to acquire picks.

Wishnowsky was the first specialist selected this year, and also is the first punter drafted during the opening four rounds since 2012.

He'll compete with veteran Justin Vogel to replace Bradley Pinion, San Francisco's fifth-round pick in 2015 who left the team as a free agent in March to join the Tampa Bay Buccaneers.

The 49ers added a first-round prospect to their defensive line for the fourth time in their past five drafts, with Bosa joining Arik Armstead (2015), DeForest Buckner (2016) and Solomon Thomas (2017) to potentially complete a fearsome front that also added expensive edge rusher Dee Ford in free agency.

The 49ers also added a physical dimension the team had been lacking at receiver with Samuel and a red zone threat the team lacks with Hurd, whom Shanahan said also could be a factor at running back and tight end as he develops.

Wishnowsky has the tools to become a top-flight punter and each of San Francisco's other four picks all have the ability to make the team and contribute as rookies, according to Lynch.

The biggest need the 49ers failed to address is at safety, where the team started several different combinations of players last season.

After trading for Ford, giving him a big contract and then stocking up in the draft and spending big in free agency, the 49ers hope they have now stockpiled enough talent to make a move up the standings in the third year of the Lynch/Shanahan regime.

The 49ers continue to build around franchise quarterback Jimmy Garoppolo, whom the team is counting on this year to return from an ACL tear that ended his season in Week 3 last year. Running back Jerick McKinnon, one of the team's top acquisitions in 2018 free agency, also returns after missing all of last season with an ACL tear.

The biggest issue looming for the 49ers as they continue to shape their training camp roster is the status of free agent kicker Robbie Gould, whom the team has retained at the franchise tag rate of $4.971 million for kickers.

Gould has been unable to come to an agreement with the team on a multiyear contract and reportedly requested a trade earlier this week.