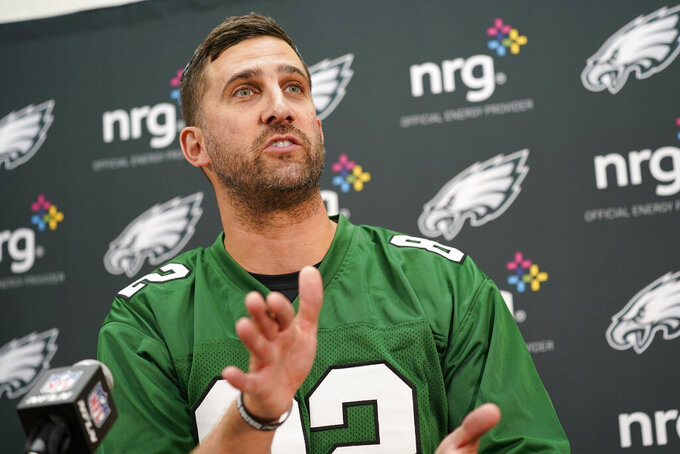 PHILADELPHIA (AP) — Jalen Hurts bounded off Washington’s field and waved his arms while the Eagles fans who turned the stadium into a South Philly pep rally chanted “MVP! MVP!”

Too soon? No way.

Through three games, three wins and a sharp rise in Philadelphia’s most popular athlete rankings, Hurts’ performance has soared to MVP standards and has fans already predicting the NFC East will be won in a walkover. Hey, did you hear Rihanna will headline the 2023 Super Bowl halftime show? Cool. Bummer for Hurts, though, he’ll be game-planning at halftime and have to miss the performance.

OK, that’s a bit of a stretch for late September — and with the Phillies still in a pennant race.

But Hurts and the Eagles have barely scratched the surface of what a healthy team can achieve. Hurts was 22 of 35 for 340 yards and three touchdown passes, one each to DeVonta Smith, A.J. Brown and Dallas Goedert in Sunday’s 24-8 win over the Washington Commanders.

“I think we have yet to play our best ball,” Hurts said.

The Eagles and their fans are overjoyed they have Hurts and not his predecessor, Carson Wentz — the quarterback Hurts replaced as the starter went down more often than the price of his still-for-sale authentic Eagles jersey. Wentz was sacked nine times, lost a fumble that set up one Philadelphia touchdown and all but 24 of Wentz’s passing yards came in the second half, long after the outcome had been determined.

The game went Philadelphia’s way. So did the franchise’s decision to scrap Wentz for Hurts.

“The work we put in, in the offseason is supposed to show in times like this,” Hurts said. “The trust we have in one another, being on the same page to see it pan out now is great. We know there’s more to it and it’s just the beginning.”

The offense. The defense. The Eagles are 3-0 for the 10th time in franchise history and won their first two road games for the first time since 2010.

“We see 3-0 teams, 5-0 teams, start hot all the time, but it’s just about going back to work because this game will humble you very quickly if you get too high on it,” Eagles coach Nick Sirianni said

Not much. Hurts and the Eagles are rolling and it’s hard not to watch them play and think the NFC East is a mere formality. But have you noticed? The Eagles scored all 24 points in the first half against Minnesota and all 24 in the first half against Washington. The second-half shutouts might not be a big deal in a romp but can certainly come back to bite them when the games get tight.

Smith was held without a catch in the season opener and had seven receptions for 80 yards against Minnesota. He went wild against Washington and had career highs with eight receptions, 169 yards, and he scored his first touchdown. Smith’s 156 yards receiving in the first half were the most by an Eagle since Kevin Curtis had 205 in September 2007. Nicknamed the Slim Reaper because of his 6-foot, 170-pound frame, he tied a career-high in receptions in the first half alone with seven.

“You may have a game like that where you don’t get the ball or you don’t get your opportunities but when they come, you’ve got to make the most of them,” Smith said.

Wentz. Oh, wait. He’s not Philadelphia’s problem anymore. Hard to nitpick a team playing with the poise and precession of a Super Bowl contender. The Eagles did have only 72 yards rushing and haven’t had a 100-yard rusher yet.

The Eagles suffered minor injuries — cornerback Darius Slay briefly left with cramps and Goedert shook off a shin injury to catch three passes and a touchdown — but nothing that should hamper them against Jacksonville.

9. One small knock on the Eagles over the first two games was a pass rush that had only three sacks. But the Eagles had six sacks in the first half alone. Among the nine for the game, Brandon Graham led Philadelphia with 2½, while Fletcher Cox, Haason Reddick and Josh Sweat each had a sack and a half. Cox and Graham lead Philadelphia with three sacks this season and are tied for the fourth-most sacks (61) in franchise history.

The reunion tour continues. The Eagles head home to play the Jacksonville Jaguars, led by coach Doug Pederson. Pederson, of course, was the first Eagles coach to ever win the Super Bowl, knocking off the New England Patriots after the 2017 season. Pederson was 42-37-1 in five seasons. He guided the Eagles to two division championships and three playoff appearances before going 4-11-1 in 2020. Pederson was fired with two years remaining on his contract. Pederson was a starting quarterback in Philadelphia in 1999 and later served as an assistant coach under Andy Reid with the Eagles and Kansas City Chiefs. The Eagles hired him in January 2016 after abruptly firing Chip Kelly a month earlier.