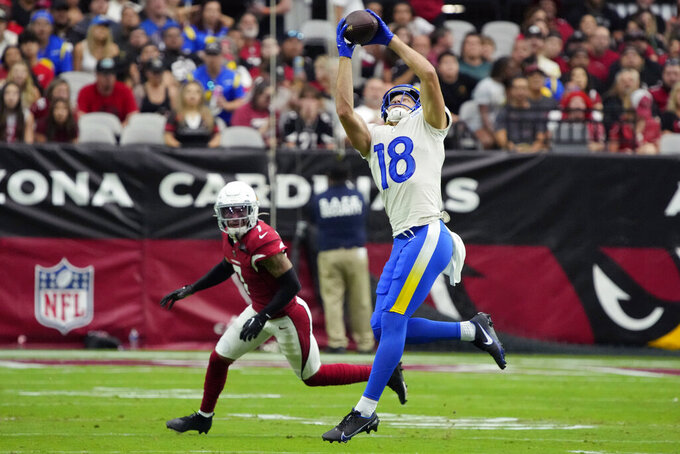 LOS ANGELES (AP) — The Los Angeles Rams almost certainly wouldn't be such consistent winners if this team hadn't stayed relatively healthy over the past half-decade.

The Rams' overall health is much worse than normal this September after a spate of early season injuries, yet it hasn't stopped Sean McVay's team from recording back-to-back victories.

Los Angeles (2-1) beat the Arizona Cardinals 20-12 on Sunday despite playing without two key offensive players and the majority of its regular contributors in the secondary.

The Rams have been forced to dig deep into their depth — and even into other teams' practice squads — in the past two weeks, yet the Super Bowl champs’ healthy playmakers have kept them moving toward Monday night’s showdown with San Francisco.

In Arizona, defensive back Grant Haley came off the practice squad and played 67 snaps in his first game of the season. Sixth-round pick Derion Kendrick barely left the field in his NFL debut, playing a whopping 75 snaps. Terrell Burgess was the third defensive back to get his first snaps of the season in Arizona while the Rams were without injured Troy Hill, Cobie Durant, David Long and Jordan Fuller.

Defensive lineman Takk McKinley also made his Rams debut a few days after joining the team, and Kendall Blanton returned to the team that cut him last month and promptly made a key reception while filling in as the backup tight end for the suspended Brycen Hopkins.

This win got even weirder: The Rams ran only 46 offensive plays to the Cards’ 81, and they won even without standout games from Matthew Stafford or Cooper Kupp.

They did it with coach McVay scheming up multiple plays that used receiver Ben Skowronek in a traditional fullback role, and they did it with a defense that allowed 365 yards, but didn't let Arizona get into the end zone.

“There is no style points in this league, but there are ways of playing more complete games,” McVay said. “That's what we're hunting up. There's still so much football to be played.”

The Rams lost Von Miller in the offseason, yet they've continued to perform well on the edge. Leonard Floyd and Terrell Lewis both had strong games in Arizona, combining for one sack and three quarterback hits while playing major roles in holding Kyler Murray to two rushes for 8 yards. Justin Hollins also contributed three tackles from the edge.

Allen Robinson still isn't on track with his new team. The veteran receiver had two catches for 23 yards on five targets, and he dropped a near-certain touchdown pass on an early goal-line slant. Rams fans are missing Robert Woods, the veteran Los Angeles native who was traded so the Rams could add Robinson, but McVay remains confident Robinson and Stafford will sync up soon.

Stafford didn't throw a touchdown pass for the first time in his 24 games with the Rams, yet he was largely outstanding against the Cardinals after throwing five interceptions in his first two games. The veteran quarterback went 18 of 25 for 249 yards with a handful of outstanding throws. Robinson and Kupp didn't help him out by dropping probable touchdown passes.

The Rams' running game still isn't excelling, even with all the twists and tweaks added by McVay — including a beautiful 20-yard TD run by Kupp on a jet sweep. Cam Akers had a strong game with 61 yards and a TD on the ground, but he also fumbled on the goal line while trying to score a touchdown that would have put the game away. McVay expressed his confidence in Akers after the game, but Akers realizes he won't get many more chances to make such a mistake.

Kendrick led the Rams with nine tackles, but he was in the concussion protocol Monday. McVay said the Rams are optimistic about his chances for a quick recovery.

44 — Kupp's yards receiving against the Cardinals. That's the fewest in any game for the NFL's Offensive Player of the Year since Stafford joined the Rams last season. Kupp had fewer than 90 yards receiving for only the third time in those 24 games.

Attempting to end the 49ers' mastery of the Rams over the past three seasons. Los Angeles (barely) beat San Francisco in the NFC title game last January, but Kyle Shanahan has won six straight and seven of 10 over McVay in the regular season.