Jags' Etienne completes comeback by getting leveled in camp 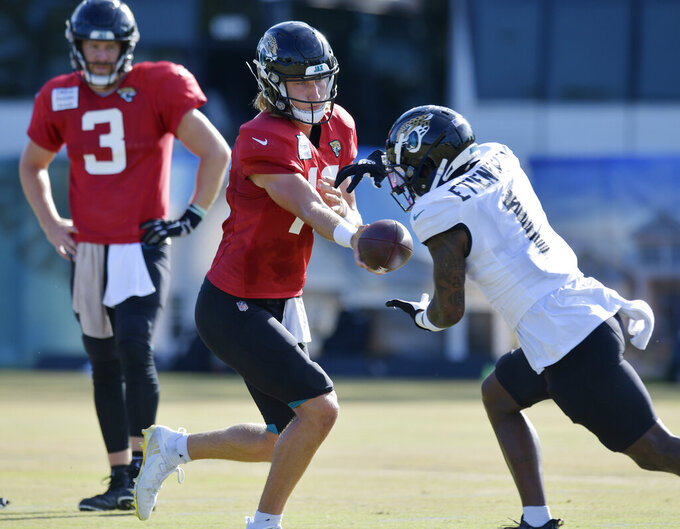 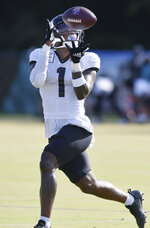 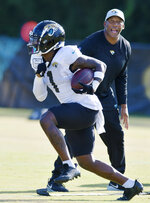 He wanted it. He needed it. He enjoyed it.

The former Clemson standout and the Atlantic Coast Conference’s all-time leading rusher got leveled when Jacksonville coach Doug Pederson dialed up a lengthy stretch of live tackling during training camp Monday. Pederson’s decision came three days after a lackluster performance against Las Vegas in the Hall of Fame game.

The Jaguars allowed 159 yards rushing — 4.8 yards a carry — in that 27-11 loss in Canton, Ohio. The meaningless exhibition seemed to have the attention of players and coaches when they returned to the practice field. Etienne welcomed it as much as anyone.

Safety Andre Cisco knocked Etienne off his feet on the opening play of the somewhat rare, hard-hitting session. Etienne easily could have stepped out of bounds, but the second-year pro who missed his entire rookie season following a foot injury cherished the contact as the final part of his yearlong comeback.

“It feels great to be back out there,” Etienne said following practice. “It’s been a long time since I’ve played football. It reminded me quickly that it’s a physical game. That’s why we play. That’s why we love it.”

Etienne, the 25th overall pick in the 2021 NFL draft, suffered a Lisfranc injury to his left foot in Jacksonville’s second preseason game last August and had season-ending surgery. He felt “kind of lonely” rehabbing by himself for much of the season but took the approach of “falling in love with the mundane” while pushing toward a full recovery.

“You have to fall in love with it to be great,” he said. “And I feel like every day I have to get better at something. If I keep stacking great days on top of each other, it’s going to show. There’s nothing more mundane than being (injured). I wouldn’t wish that on my worst enemy.”

Although Etienne has been fully cleared to do anything and everything since organized team activities began in May, he hadn’t taken part in any contact drills. Pederson even held him out of the preseason opener as a precaution. So Etienne figured he hadn’t been waylaid like that since Clemson’s 2020 season finale, a 49-28 loss to Ohio State in the Sugar Bowl.

Etienne was hit a few times during camp last year and even carried twice up the middle for 3 yards in two preseason games. But none of those tackles compared to the one Cisco delivered on an outside run Monday. Etienne popped up, smiled and ran back to the huddle – eager for another.

“I need that!” he insisted. “I haven’t played in so long (that) I want to get tackled. I need to get tackled just to get my body back acclimated with that. I’ve just been at home, working out, chilling on the couch, stuff like that, so to come out here and get some bumps and bruises … I miss that contact. It may sound crazy, but I miss kind of being in those car crashes.”

Etienne was one of the most dynamic playmakers in college football history when the Jaguars chose him 24 picks after landing college teammate Trevor Lawrence. Etienne led the country with 55 runs of 20 or more yards between 2017 and 2020, rushing for 2,053 yards and 21 touchdowns on those big plays and averaging 37.3 yards a touch.

He finished his college career with 4,752 yards on the ground, ranking 28th in NCAA Division I history.

The Jaguars had hoped to use him as a matchup nightmare, a running back who could be effective out of the backfield, in the slot or from a wideout position. His NFL debut ended up getting delayed a year when he hurt his foot at New Orleans on Aug. 23, 2021.

He's back now and is expected to be an integral part of Jacksonville's rebuild.

“Honestly just glad to have him back,” Lawrence said. “He looks like he’s in better shape than I thought he was our last year at Clemson. I mean, obviously he was great, played great, all that. He was fine. But I think his body looks great. He’s running really well. He’s picking up the offense, done a great job, and protections, all the all those things that we’re asking him to do. He’s done a great job.”

And he's ready for more.