Jaguars set to start interview process for next head coach 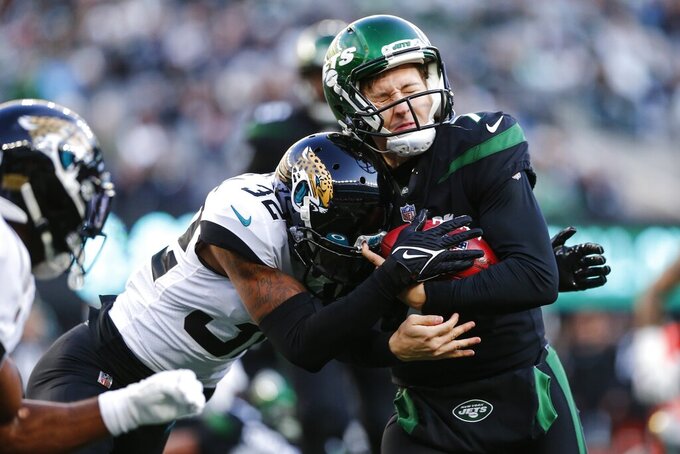 JACKSONVILLE, Fla. (AP) — The Jacksonville Jaguars are getting an earlier-than-usual start on their coaching search.

This time, owner Shad Khan doesn’t have his guy already lined up.

The Jaguars (2-13) will begin setting up and interviewing candidates this week — the NFL now allows teams to start the process during the final two weeks of the regular season — and Khan is expected to cast a wide net in search of his fifth head coach in the past decade.

Khan had preliminary discussions with (and essentially targeted) Urban Meyer a year before he fired Doug Marrone following the 2020 season. Khan never imagined Meyer, one of college football’s winningest coaches, would be such an NFL debacle.

Khan fired Meyer on Dec. 16, ending one of the most turbulent and toxic coaching tenures in league history, and clearly needs to completely tear down and rebuild a woeful franchise that’s endured double-digit losses nine times in his 10 years.

Jacksonville has dropped 34 of its past 39 games, including a 26-21 nail-biter at the New York Jets on Sunday.

“I’ve had a lot of failures; they were not on the sports page,” Khan said earlier this month. “You get up, like football, you dust yourself off and you have another go at it.”

NFL teams who have fired their head coach can now interview potential replacements during the final two weeks of the regular season, with consent of the candidate’s employer. The proposal was passed in late October.

Matt Wright has made all six of his field-goal attempts in the past two games. He connected three times at the Jets, including twice from beyond 40 yards, to give the Jaguars a chance down the stretch. He’s made 16 of 19 on the season, including nine in a row.

Although he doesn’t have enough leg to consistently reach the end zone on kickoffs — he has just two touchbacks on 21 kickoffs — his accuracy should make him an option to stick somewhere in the NFL, maybe even in Jacksonville, next season.

Jacksonville’s run defense was mostly nonexistent in New Jersey, partly because it was without linebacker Myles Jack (COVID-19) and safety Rayshawn Jenkins (ankle). The Jets ran 36 times for 273 yards, averaging 7.6 yards a carry. The low point for the Jags was when rookie quarterback Zach Wilson got loose for a 52-yard touchdown run in the first quarter.

Tavon Austin is starting to make plays in a variety of ways. Austin, a 2013 first-round draft pick by St. Louis, caught six passes for 68 yards against the Jets and ran three times for 21 more. All were season highs for a 31-year-old receiver who’s playing for his third team in as many years.

Austin is getting a chance to help the Jags deal with season-ending injuries to receiver Jamal Agnew (hip) and now running back James Robinson (torn Achilles tendon).

Dare Ogunbowale replaced Robinson early and ran 17 times for 57 yards, averaging 3.4 yards a carry against a Jets defense that was playing without five starters. Ogunbowale also dropped a pass. No one would be surprised to see newly signed running back Ryquell Armstead to get touches in the final two games.

Robinson is headed to injured reserve and will have surgery that should affect his availability to start next season. ... Punter Logan Cooke injured his right knee and will miss at least one game, maybe the final two.

8 — number of losses the Jags have at New England. They have never won there.

Finding the right coach who can help Jacksonville end its losing ways.