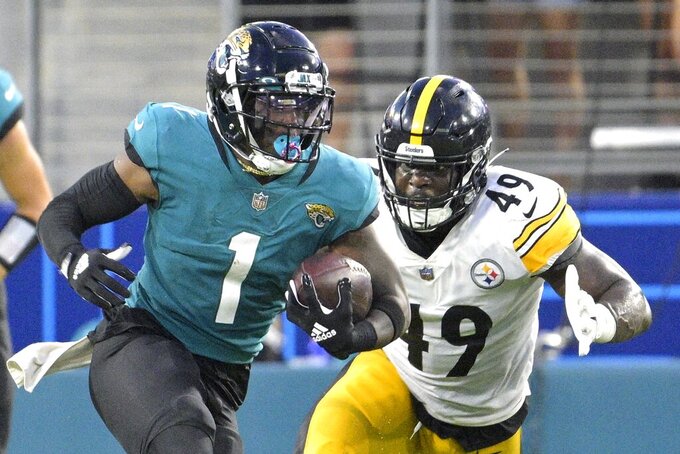 Strengths: The Jaguars spent big in free agency for the second straight year, with much of the money going toward a much-needed defensive rebuild. Owner Shad Khan has committed more than $200 million — including $125 million guaranteed — the past two years to bring in six defensive starters who could help make Jacksonville one of the stingiest units in the league. Oluokun, Fatukasi and Williams join last year’s class that included CB Shaquill Griffin, FS Rayshawn Jenkins and DE Roy Robertson-Harris. GM Trent Baalke also spent significant draft capital on that side of the ball, selecting plug-and-play starters Travon Walker (edge), Devin Lloyd (linebacker), Andre Cisco (safety) and Tyson Campbell (cornerback) in the past two years. The results should yield an improved defense, quite possible the franchise’s best since 2018.

Weaknesses: Jacksonville has been mostly anemic on offense for nearly a dozen years. The team has finished 25th or worse in scoring nine times in the past 11 seasons, a paltry stretch of futility in which the Jags have finished last in the league in scoring three times. They averaged a franchise-worst and league-low 14.9 points in 2021, hardly what anyone expected when they drafted Trevor Lawrence with the No. 1 overall pick. Lawrence clearly needed more help, and Baalke responded by signing Kirk, Jones, Engram and Scherff in free agency. Lawrence also gets fellow first-rounder and Clemson teammate Travis Etienne, the Atlantic Coast Conference’s all-time leading rusher, in the mix after he missed his rookie season with a foot injury. The Jaguars insist Lawrence and his supporting cast will end the team’s offensive slump.

Camp Development: Campbell and Cisco look like budding defensive stars, and Zay Jones might be a sneaky-good addition for Lawrence considering Kirk, Engram and Etienne are sure to draw extra attention. RB James Robinson (Achilles tendon) should be healthy enough to return early in the season, maybe even for the opener, but he looks heavier than usual and is still running with a limp.

Fantasy Player To Watch: Etienne will have a featured role in the offense, along with Kirk and Engram. The Jaguars have no reservations about running Etienne between the tackles or using him in the passing game. The 25th overall pick in the 2021 draft looks fully healed from a Lisfranc injury and has more speed and elusiveness than Robinson.

Expectations: The Jaguars could have as many as 13 new starters, a potentially big swing for a team that’s won a combined four games the past two seasons, held the top draft spot in consecutive years and finished last in the AFC South four straight times. Jacksonville might have enough young talent to surprise opponents — especially if Lawrence makes the jump many are expecting — and should benefit from no longer having Urban Meyer in the building.