Jones having his usual butterflies as Giants look to Titans 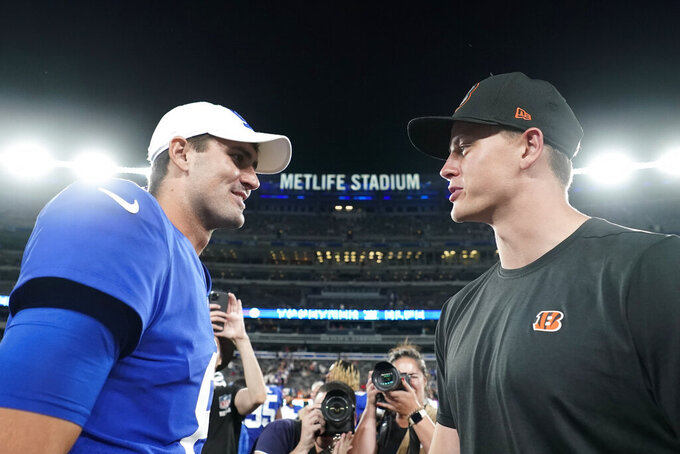 EAST RUTHERFORD, N.J. (AP) — At age 25 and entering his fourth NFL season, Daniel Jones isn't feeling any different in the stretch run to the season opener against the Tennessee Titans.

His excitement level was up and the butterflies were floating in his stomach Tuesday as the Giants began work on the game plan for Sunday's opener in Nashville. It also will be Brian Daboll's debut as a head coach.

“It’s all a good thing and it helps you know that you’re getting ready to go,” Jomes said after practicing in light rain. “Once we get out there and the ball gets snapped, that normally calms down a little bit and you get into the flow of the game. I’m excited to get going.”

This is a major year for Jones, the No. 6 overall pick in the 2019 draft. His first three seasons have been marked by inconsistency, losing and injuries. He missed the last six games of last season as New York went 4-13 and fired Joe Judge after two years as coach.

Even co-owner John Mara admitted after last season the Giants, who have had five straight losing seasons, have seemingly done everything they can to mess up their quarterback.

The pressure on Jones increased earlier this year when new general manager Joe Schoen and the organization opted not to pick up the fifth-year option on his rookie contract. It's made this season: either produce or pack up.

Jones knows the stakes, but he has repeatedly said he is focused on this week and getting better.

“It’s been fun this week,” Jones said. “You kind of switch into game-plan mode, you’re preparing for certain looks, scheming up our offense to put us in the best position to make plays and succeed. It’s about us. It’s about us executing our plays and doing what we need to do as a unit and an offense.”

Daboll likes Jones' work ethic, his knowledge of the game and his leadership abilities.

“You want to have the quarterback feel as comfortable as he can, and you also want to tell him some of the reasons why you’re doing things you want to try to do against the opponent you’re going against,” Daboll said. "But he’s had really good dialogue with us; I think he’s in a good spot."

Jones should benefit from an improved offensive line which added center Jon Feliciano and right guard Mark Glowinski in free agency. Right tackle Evan Neal was drafted No. 7 overall and left tackle Andrew Thomas has developed into an elite player.

Almost two years after an ACL injury, running back Saquon Barkley is looking very much like the back who was the 2018 NFL Offensive Rookie of the Year.

The concern is the receivers. Kenny Golladay is coming back from a bad season (no TDs). Kadarius Toney needs to show he can stay on the field, but he missed all the preseason games with nagging injuries. It's unknown how much veteran Sterling Shepard can contribute after missing most of camp rehabbing an Achilles injury. Rookie tight end Daniel Bellinger is unproven.

Jones likes the offense, which employs a lot of movement. He also likes that Daboll is constantly finding new ways to run a play.

“I think it allows the quarterback to do a lot in the pocket, outside the pocket, in the run game,” Jones said. “It allows us to get into advantageous looks depending on what the defense does, easily getting in and out of plays. I think from all those perspectives, it’s very quarterback friendly for any quarterback.”

NOTES: Starting outside linebackers Kayvon Thibodeaux (knee) and Azeez Ojulari (leg) remain day to day. ... Daboll will not say who will start at left guard for the injured Shane Lemieux. Ben Bredeson was listed as the starter on the depth chart backed up by rookie Josh Ezeudu. ... There were a couple of numbers changes. Veteran punter Jamie Gillan is wearing No. 6. He wore No. 17 in camp along with receiver Wan'Dale Robinson, the second-round pick. Robinson said the organization made the decision on the number. Rookie LB Micah McFadden switched from No. 43 to 41, a number he wore as a freshman in high school. Fellow rookie LB Darrian Beavers wore No. 41 in training camp, but he will miss the season with a torn ACL. ... Rookie TE Daniel Bellinger is now wearing No. 82 instead of No. 45. ... Marcus Johnson was signed to the practice squad and fellow veteran WR C.J Board was released.