Justin Fields rushes for 147 yards in another Bears loss 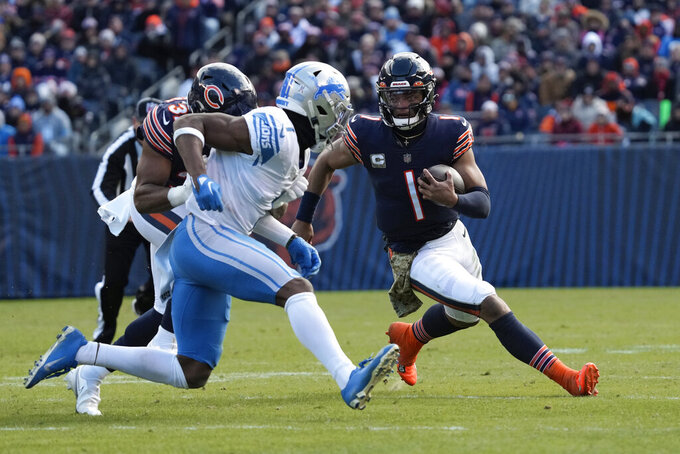 CHICAGO (AP) — Justin Fields is collecting NFL records in his second season with the Chicago Bears. It just doesn't mean all that much to him, not with all the losses piling up.

Fields threw for two touchdowns and rushed for two more TDs on Sunday against the Detroit Lions. But the dynamic quarterback also threw an ugly interception that was returned for a touchdown in a 31-30 loss.

According to STATS, Chicago became the first team in NFL history to score at least 29 points in three consecutive games and lose all three. The Bears (3-7) have dropped six of seven overall.

“It's just where (are) your priorities as a player. Is it to break records or is it to win?” Fields said. “Personally, mine is to win. I don't care about breaking records. I just want to win games.”

Fields rushed for 178 yards and accounted for four touchdowns last weekend, but the Bears lost 35-32 to the Miami Dolphins. Fields' rushing total set a Super Bowl-era record for a quarterback in a regular-season game, topping Michael Vick’s 173 yards for Atlanta against Minnesota in 2002.

He went right back to work against Detroit, finishing with 147 yards on 13 carries. He had a bruising 1-yard TD run in the final seconds of the first half and an electric 67-yard scamper for another score in the fourth quarter.

Fields broke the NFL record for yards rushing by a quarterback in consecutive games, topping Tobin Rote's 281 yards for Green Bay in 1951, according to STATS. The former Ohio State star also became the first QB in the Super Bowl era with multiple rushing touchdowns of at least 60 yards in the same season.

Led by Fields, Chicago became the first team in NFL history with five consecutive games of at least 225 yards rushing. But no one on the Bears seemed all that interested in the team's impressive statistics.

“They’ve practiced hard. They’re doing the right thing,” first-year coach Matt Eberflus said. “It’s about determination and perseverance and staying the course, and that’s what they’re going to learn. That’s what they are learning.”

Chicago opened a 24-10 lead on Fields' two touchdown passes to Cole Kmet in the third quarter. But it was outscored 21-6 in the fourth, hurting itself with a couple of big mistakes.

Detroit tied it at 24 when a hurried Fields floated an ill-advised throw in the direction of Kmet on an attempted screen, and Jeff Okudah returned the interception 20 yards for the TD.

“I can assure you that will never happen again for the rest of my career,” the 23-year-old Fields said.

“Just got to dirt it and play the next play.”

Fields responded with his long touchdown run on third-on-2 on Chicago's ensuing drive. But Cairo Santos missed the extra point.

After Detroit (3-6) went back in front on Jamaal Williams' 1-yard TD run with 2:21 left, Chicago got one first down before stalling. Fields needed stitches for a gash on one of his ears after he was thrown down for a sack on the team's final offensive play.

“I’m hurting pretty bad, not really from hits but just my legs are kind of sore,” Fields said after the loss. “But other than my legs being sore and of course my ear, I’m fine.”

“His grit, his toughness, how physical he can be, how strong he is, that’s what makes him a special player,” Eberflus said.