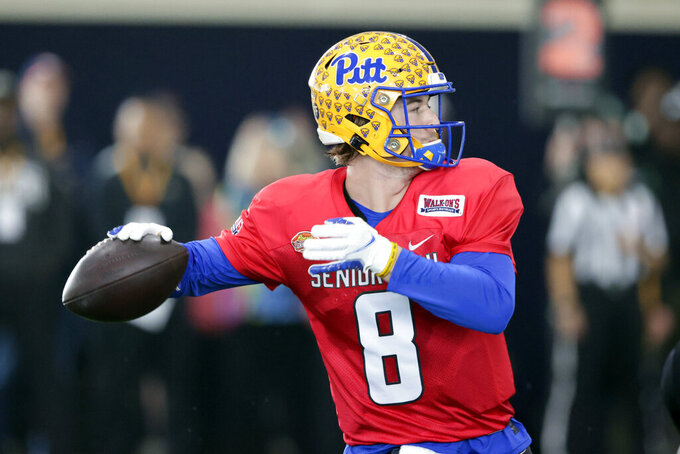 National Team quarterback Kenny Pickett of Pittsburgh (8) runs through drills during practice for the Senior Bowl NCAA college football game Thursday, Feb. 3, 2022, in Mobile, Ala. In an NFL draft where it seems unlikely for a passer to be the top overall NFL draft pick, that means a competition among players like Pittsburgh’s Kenny Pickett, North Carolina’s Sam Howell and Liberty’s Malik Willis to be the first quarterback taken. They’ll culminate their weeklong NFL audition for NFL teams with Saturday’s Senior Bowl at Hancock Whitney Stadium. (AP Photo/Butch Dill)

The intrigue this year surrounds the breadth of Minnesota's massive tackle Daniel Faalele, the 40-yard dash time of UTSA defensive back Tariq Woolen, and the hand size of Pitt passer Kenny Pickett.

Woolen is a 6-foot-4, 205-pound cornerback who was clocked using GPS data trackers at 22.45 mph at the Senior Bowl. That would appear to give him at least an outside chance of challenging John Ross's record time at the 2017 combine of 4.22 seconds in the 40-yard dash.

Pickett might just measure the smallest hand size for a quarterback at the combine, taking Jeff Blake, Michael Vick and Kliff Kingsbury, all of whom measured in at 8½ inches, off the hook.

All this hand wringing about his hand size doesn't seem to bother Pickett.

“No,” he said after arriving 88 minutes late for his media session Wednesday because his medical evaluations went long. “It is what it is. I think the media runs with it more than I’d say NFL teams do.

His hand size has certainly been on his mind, though.

Like Brandon Allen, who increased his hand measurements by three-eighths of an inch at the 2016 combine after checking in at 8½ inches at the Senior Bowl, Pickett has been doing hand exercises to widen his measurement this week.

“The reason why I didn’t measure at the Senior Bowl was to have those extra couple weeks,” Pickett said. “Just a common sense thing, having more time to work the exercises. ... Whatever it measures, it measures."

That's the same unflappable approach Joe Burrow took two years ago when he tweeted, tongue in cheek: “Considering retirement after being informed the football will be slipping out of my tiny hands. Keep me in your thoughts.”

Of course, Burrow's nine-inch hands didn't keep him from going No. 1 in the draft six weeks later to the Cincinnati Bengals, whom he led to the Super Bowl in his second season.

A quarterback's hand size can be a deal breaker, especially for teams that play outdoors where the weather can get nasty because it could make it harder to hold onto the football.

NFL Network analyst and former scout Daniel Jeremiah said Pickett's small hands weren't that much of an issue with teams he talked to until the Senior Bowl when "we had some bad weather down there one day and he struggled.”

Everyone did, save for Liberty QB Malik Willis, who powered through the rain and wind with no trouble.

Pickett “really struggled throwing the ball” that day, Jeremiah said. “I think that kind of (concern) resurfaced a little bit and I think there's a least a curiosity, I would say, to see what his hand size looks like.”

Plus, the right-hander has a double-jointed right thumb, which only adds to the curiosity when he's measured Thursday prior to the on-field workouts at Lucas Oil Stadium.

“I don't know that I've ever seen a situation where the quarterback (generated) this type of discussion about his hands, because it's not just the size," Jeremiah said. "It's a little bit different.”

Pickett said the proof is in the game tape, particularly Pitt's 30-23 overtime win against Sam Howell and North Carolina in a cold November rain last year. He had no problems fumbling. No passes slipped from his hand.

“The big body of work is your tape,” Pickett said. “There are multiple games throughout your career where people can go watch. That’s your resume. Your tape is your resume. All this other stuff are the boxes you have to check before the draft.”

Hand size isn't everything. Some players like Vick and Burrow, have done fine despite diminutive hands. And others with unusually large hands didn't fair so well in the NFL.

Palm readers might have as much luck predicting a quarterback's professional prospects.

Pickett figures one way or another, he'll do some clapping when his hand measurements are finally over.