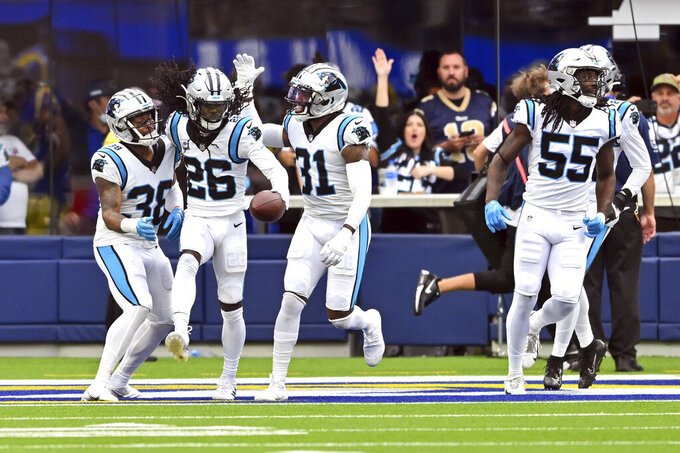 Carolina Panthers cornerback Donte Jackson (26) celebrates with cornerback Myles Hartsfield (38) and safety safety Juston Burris (31) after Jackson returned an interception for a touchdown during the first half of an NFL football game against the Los Angeles Rams Sunday, Oct. 16, 2022, in Inglewood, Calif. (AP Photo/Jayne Kamin-Oncea)

INGLEWOOD, Calif. (AP) — When left tackle Joseph Noteboom went down with a probable Achilles tendon injury in the second quarter Sunday, the Los Angeles Rams were suddenly down to one opening day starter on their once-powerful offensive line.

The Rams gathered themselves, pushed ahead on a touchdown drive and eventually beat an opponent with just as many injury problems and even more overall chaos than the beleaguered defending champions.

Matthew Stafford passed for 253 yards, Darrell Henderson and receiver Ben Skowronek rushed for touchdowns in the second half, and the Rams snapped their two-game skid with a 24-10 victory over the Carolina Panthers on Sunday.

“This game today is another example of (how) you just never know what's going to happen," Stafford said. “Our left tackle goes out, and we've got to move guys around. Obviously that kind of spurred us in execution, but we've got to continue to do more of it. If we can do that more consistently and play off of our defense, who played great again today, that would be nice.”

Los Angeles trailed 10-7 at halftime, but took control in the second half behind its patchwork offensive line. After Skowronek put the Rams ahead and scored his first NFL touchdown in the third quarter with an 18-yard sprint on his first career rushing attempt, Henderson added a 2-yard TD run with 8:15 to play.

“Those are the games that are fun,” said Cooper Kupp, who caught seven passes for 80 yards. “You don't like how things are going offensively in the first half ... but you really like having a bunch of guys being able to contribute, and seeing other guys succeed and feeling like it was something we did together as a team.”

Donte Jackson returned an interception 30 yards for a touchdown for the Panthers (1-5), who have lost three straight.

Christian McCaffrey amassed 158 of Carolina's 203 total yards, racking up the highest percentage of any NFL team's offense from one player since 2003. But P.J. Walker passed for just 60 yards while making his third career start in the injury absences of Baker Mayfield, Sam Darnold and Matt Corral.

Walker was sidelined in the fourth quarter with a neck injury, but passed concussion protocol. Jacob Eason passed for 59 yards for the Panthers, whose offense didn’t score after a field goal on the opening drive.

McCaffrey said Walker “did a great job. We’ve got to make more plays for him. We’ve got to do a better job of making plays and making sure you know where we’re at on third down.”

Wilks took over when Matt Rhule was fired last Monday, and the former Arizona coach already has drama on his hands: He sent receiver Robbie Anderson to the locker room shortly before the end of the third quarter after Anderson had a shouting match with receivers coach Joe Dailey.

“When you look at the turnaround that we had this week, and then about guy that’s coming in that wasn’t starting. I wanted to make sure that we No. 1 established the run game," Wilks said. “I thought we did a great job of that in the first half. When you look at the time of possession, we were good. We just got out of control in the second half.”

Los Angeles already was without five of its top eight offensive linemen before losing Noteboom, who left the field on a cart in the second quarter. Coach Sean McVay said Noteboom likely injured his Achilles tendon.

“It’s unbelievable, isn’t it?” McVay said. “I feel sick for Joe Noteboom, but what a stud (Alaric) Jackson was to pivot from right guard to left tackle. He was outstanding all day.”

The Rams made an impressive 73-yard scoring drive after Noteboom’s injury, capped Robinson’s TD catch on a fade route.

But Carolina took a 10-7 lead to the break after Stafford overthrew Kupp and Jackson took it to the house for his first career touchdown 1:58 before halftime.

Los Angeles tied it with a field goal after its 87-yard drive stalled at the Carolina 3 in the third quarter, and the Rams took the lead late in the third when Skowronek took a handoff on a sweep and scored his first NFL touchdown while Robinson blocked two defensive backs.

Henderson rushed for 43 yards in the absence of Cam Akers, who stayed home amid an apparent conflict with the coaching staff. Rams general manager Les Snead told Fox's broadcast crew he is trying to trade Akers, his highest draft pick in the past five years. McVay said he expects to have “more clarity” about Akers' situation Monday.

Carolina yielded 360 total yards in the first game since Al Holcomb replaced the fired Phil Snow as defensive coordinator. The Panthers had one of the NFL's worst rushing defenses coming in, and the Rams managed 111 yards on the ground.