Lance looks comfortable in role as starting QB for 49ers 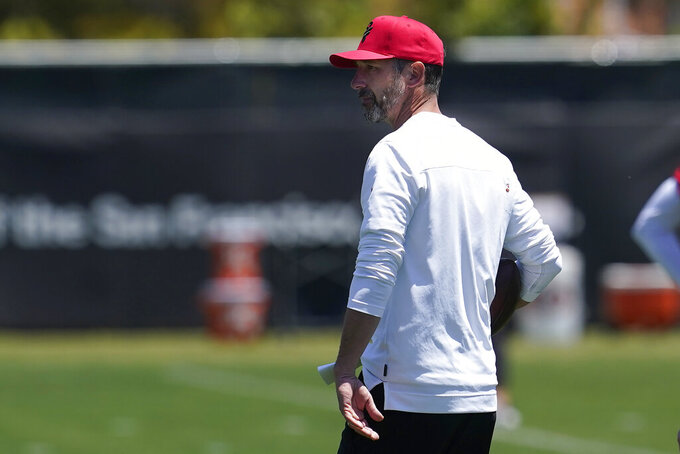 SANTA CLARA, Calif. (AP) — Trey Lance took the practice field this week for the San Francisco 49ers in a far different state than his rookie campaign.

The nagging finger injury that limited him all last season has healed, his knowledge of the offense has grown and he has emerged as a leader now that he is set to take over for Jimmy Garoppolo as starting quarterback in San Francisco.

“Last year I was swimming a little bit,” Lance said Tuesday following his second practice during this portion of the offseason for the Niners. "It was hard to not be, being drafted and then 10 days later, rookie minicamp. So just trying to keep up, keep up with the other guys in the room. But yeah, I feel very different this year, for sure.”

After starting just two games as a rookie, Lance is set to take over the role he has been groomed for since San Francisco traded three first-round picks to draft him last year.

Garoppolo is rehabilitating from shoulder surgery and coach Kyle Shanahan said the plan remains to trade him after he recovers before the start of training camp.

That means the offense will be Lance's to run, and teammates see a big difference after a year learning under Garoppolo and Nate Sudfeld.

“I definitely think he’s taking ownership,” tight end George Kittle said. “You can kind of tell that. Even in meetings and stuff, he’ll talk. He’s assuming responsibility. ... I think Trey’s learned a lot from them and he’s taken things from them and he’s continually doing them and just trying to better himself every single day.”

Lance looked in control during practice Tuesday, although most of his passes were of the shorter variety as he had few chances to show off the strong arm and running ability that led the Niners to invest so heavily in him a year ago.

But Shanahan has been pleased with what he has seen so far this offseason.

“He’s been great,” Shanahan said. "He went away for a while, along with almost everyone else. You can tell he got healthy while he was gone and he’s come back and he has gotten in four good weeks of work.”

Lance's rookie season was impacted by a finger injury in the final exhibition game against the Raiders that didn't fully heal until the offseason.

He was used in a situational role a few times early in the season and made two starts when Garoppolo was hurt, struggling at times in a Week 5 loss at Arizona and showing some improvement in a Week 17 win over Houston.

For the season, he completed 41 of 71 passes for 603 yards, five TDs and two interceptions, while also running for 168 yards and a score.

“I felt like towards the end of the season, I wasn’t the best version of myself, overall,” Lance said. "It was a long season, long pre-draft process with me not being in school. Everyone says it’s going to be, but you don’t really realize it until it happens. I think the finger for me was the biggest thing just as far as throwing the ball. ... But now, I feel like I’m in a great spot health-wise and throwing the ball well and I feel really good.”

That has carried over to Lance being more comfortable in public settings and more assertive in team meetings and organizing offseason throwing sessions with teammates.

“Just continuing to find my role," Lance said. “Last year was definitely different. For me, I want to keep getting better. That’s my focus right now. The leadership stuff is, that’s just being a good guy in the locker room, but that’s stuff that’s earned. That’s not really anything I can say to be a leader. I’m just trying to be a good guy, be a good teammate, have my teammates back at the end of the day.”

NOTES: Samuel was one of several key players not taking part in practice. All-Pro LT Trent Williams and star edge rusher Nick Bosa are working out on their own and not expected back until later this spring. ... Kittle and LB Fred Warner are being held out of practice with what Shanahan called “lower half” injuries. ... LB Azeez Al-Shaair (shoulder, knee), RT Mike McGlinchey (quadriceps) and DT Javon Kinlaw (knee) are rehabbing and not expected back until training camp. ... The Niners are also still without starting C Alex Mack, who hasn't decided whether he will retire or play another season.