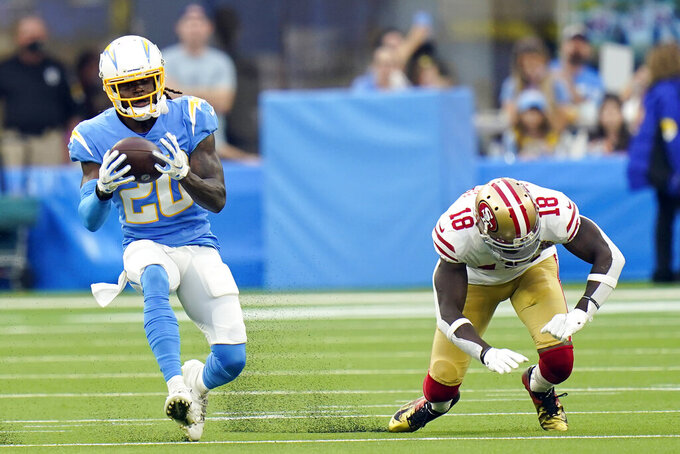 INGLEWOOD, Calif. (AP) — Trey Lance's bid to be the San Francisco 49ers' starting quarterback was a bit of a rollercoaster Sunday night, but the rookie rebounded from a rough start to keep his hopes alive.

Lance, the third overall pick in April's draft, threw two touchdown passes in a 15-10 victory over the Los Angeles Chargers. Lance played six series during the second and third quarters and finished 8 of 14 for 102 yards and an interception.

After struggling during joint practices against the Chargers on Thursday and Friday, Lance's problems continued during the first three series. But he settled down during the final three drives, completing seven of his last eight passes for 93 yards, including both TDs.

“I think this week was huge just for my development as a football player, not even necessarily for tonight, if that makes sense," Lance said. “I think I learned so much this week getting to practice against another defense, getting to be around different guys and have a different experience in a different setting.”

Whether it will be Lance or Jimmy Garoppolo who starts the Sept. 12 opener at Detroit, coach Kyle Shanahan has not provided any clarity. He said Garoppolo remains the “presumptive starter,” but hasn't given a complete endorsement.

When asked when he will name his starter, Shanahan said he would whenever he feels like it.

“It’s hard for me to give a date when it’s based off of when we know and we feel like naming it, so whenever that happens. But I promise it’ll be by that Sunday,” Shanahan said.

Garoppolo started and played only one series for the Niners. Garoppolo was 3 of 6 for 15 yards during the 15-play possession, which ended when his pass intended for Brandon Aiyuk went off Aiyuk’s hands and was intercepted by Asante Samuel Jr. at the Chargers’ 15.

Garoppolo might have played a couple more series, if the opening drive was shorter. But he said he is taking the whole competition in stride.

“There’s just so many other things to worry about. Just, I’ll let the chips fall where they may type of thing,” he said.

Lance also won the duel of former North Dakota State quarterbacks. Easton Stick, who mentored Lance in 2018 when the Bison won their seventh FCS title in eight years, got the start for the Chargers and was 10 of 14 for 85 yards and a touchdown.

“Fargo, North Dakota, means a ton to us. It was a lot of fun to be out there with Trey and get a chance to represent the Bison a little bit,” said Stick, who directed two scoring drives in his six first-half possessions.

Michael Badgley’s 50-yard field goal extended the Chargers advantage to 10-2 late in the second quarter before the Niners rallied. San Francisco took over at its 25 with 57 seconds remaining in the first half as Lance directed a late TD drive.

Trent Sherfield took advantage of a breakdown in coverage and a missed tackle by Mark Webb Jr. for a 41-yard reception to the Chargers 13 with 21 seconds remaining.

“That’s why I was pumped about getting the two-minute drill," Shanahan said. "Trey can’t get enough two-minute drives before the regular season starts, so I was pumped with that. And then we did the third quarter, I was real happy with how he finished.”

The Niners took the lead on an 11-play drive midway through the third quarter, which concluded when Lance found former Charger Travis Benjamin for a 16-yard TD.

Stick was sacked for a safety early in the second quarter by San Francisco's Jordan Willis, giving the Niners a 2-0 lead. Willis is ineligible for the first six games due to a violation of the NFL's performance-enhancing substances policy.

Following Tevaughn Campbell's interception, Stick directed a seven-play, 40-yard drive, culminating when he scrambled near the right sideline while being pursued by three defenders and lofted a 3-yard pass to a wide open Josh Palmer in the back of the end zone.

“You’re kind of just playing at that point,” Stick said. “Josh found a way to kind of uncover there in the back. A few guys kind of attached to me, and there was enough of a window to kind of sneak it in there.”

Chase Daniel played the second half and completed 14 of 21 passes for 60 yards and an interception.

Samuel Jr., who was selected in the second round of this year's draft, was assessed a 15-yard unsportsmanlike conduct penalty when he took off his helmet in the end zone while celebrating after his interception.

The Chargers had five penalties of 12 yards or more, which did not please coach Brandon Staley.

“We’re always trying to emphasize playing clean football, because that’s ultimately what leads to being a successful team,” Staley said.

The Chargers' first game in front of fans at SoFi Stadium drew 68.327. The stadium, which the Chargers share with the Rams, opened last year, but both teams played to an empty house due to the coronavirus pandemic.

Chargers rookie LB Amen Ogbongbemiga suffered a sprained AC joint during the second half and did not return.

49ers: Return home to host the Las Vegas Raiders in their preseason finale next Sunday.

Chargers: Wrap up the preseason on Saturday at the Seattle Seahawks.