Lions and Jaguars face off Sunday in possible shootout 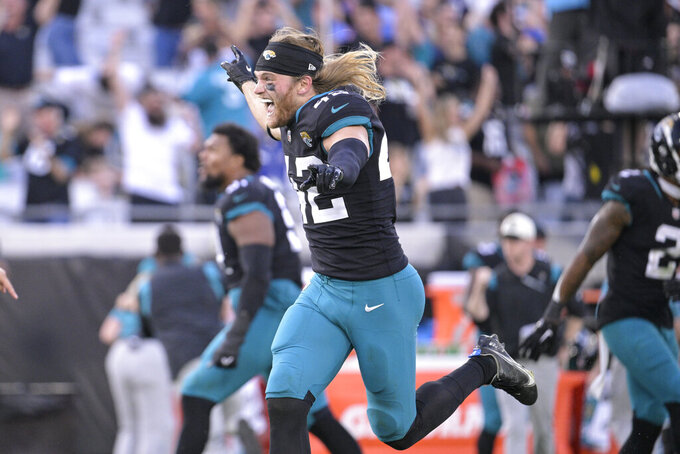 TURNOVER DIFFERENTIAL: Dolphins plus-2; Lions even.

JAGUARS PLAYER TO WATCH: ILB Chad Muma had nine tackles in his first career start against Baltimore and coach Doug Pederson said Muma “did enough in that game to give him another opportunity.” So Muma gets the nod again over fellow rookie Devin Lloyd, the 27th overall pick.

LIONS PLAYER TO WATCH: RB D’Andre Swift. In the first two games of the season, Swift ran for 200 yards on 20 carries, added another 62 yards receiving and scored two touchdowns. In the next nine games, dealing with shoulder and ankle problems, he’s only carried 30 times for 92 yards and caught 19 passes for 124 yards. He’s scored three times, but the Lions need him to play a bigger role in the offense.

KEY MATCHUP: Jacksonville’s rushing game against Detroit’s defense. The Jaguars might not have leading rusher Travis Etienne (foot), and James Robinson is with the Jets, which leaves JaMycal Hasty. Hasty carried 12 times for 28 yards in Sunday’s 28-27 win over the Baltimore Ravens —the first time he’d run more than four times all season. The Lions, though, are giving up an average of 170 rushing yards in their past three games.

KEY INJURIES: Pederson called RB Travis Etienne “day to day” with a sprained right foot. “I want to make sure that he’s 100% before we stick him out there.” Detroit’s offensive line is banged up, but the bigger concern might be cornerback Jeff Okudah (concussion). Without him, Trevor Lawrence might have a big day.

SERIES NOTES: The teams have only met seven times, and the most well known was the first one. On Dec. 17, 1995, Tom Coughlin’s Jaguars came to the Pontiac Silverdome and lost 44-0 to Wayne Fontes and the Lions. The Lions intercepted four passes, Barry Sanders and Johnnie Morton each scored twice and it was 27-0 at halftime. What bothered Jacksonville was, with the ball on the Jaguars 18 and more than five minutes left, Detroit took a knee. Several Jaguars players saw it as a way to humiliate them.

STATS AND STUFF: The Lions are eighth in average yards per play while the Jaguars are 14th, but the difference is only 5.8 to 5.6. ... The Lions have three players with a 50-yard rush this season — Swift, Amon-Ra St. Brown and Jamaal Williams, but only one with a 50-yard reception — TE T.J. Hockenson, who has been traded to the Minnesota Vikings. ... The Jaguars have lost an NFL-record 19 consecutive games against NFC teams. ... QB Trevor Lawrence is coming off the best game of his career, throwing for a season-high 321 yards, with three touchdowns and no interceptions. He’s completed 77% of his passes for 815 yards over his past three games, with six TDs and no picks. … Veteran WR Marvin Jones returns to Detroit for the first time since leaving the Lions to sign with Jacksonville in 2021. He had a clutch, shin-dragging touchdown catch last week to help beat the Ravens. Jones has played his entire 11-year NFL career for teams with cats as nicknames — Bengals, Lions and Jaguars.

FANTASY TIP: With Okudah banged up, Lawrence should be able to have another big game.