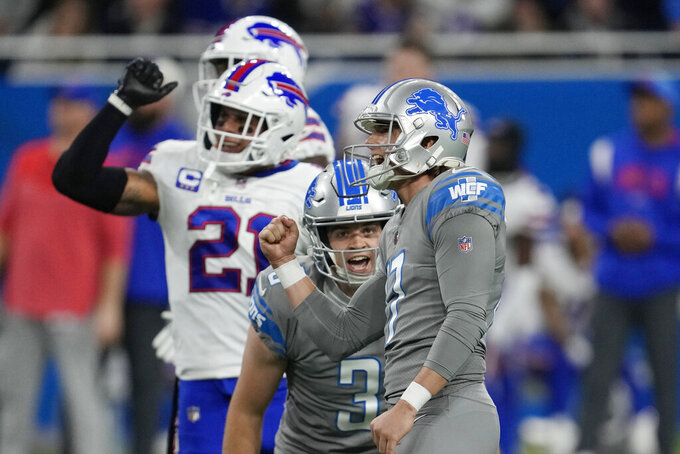 DETROIT (AP) — The Detroit Lions came into Thanksgiving on their first three-game winning streak in five years, thanks to some clutch plays late in games.

On Thursday, they had chances to stun the Buffalo Bills for a fourth straight win, but they couldn't quite do it.

“I'm frustrated, because I hate losing, and I told our guys that this one should sting,” Lions coach Dan Campbell said after the 28-25 loss. “But I'm proud of the way we played right to the end — we're getting better and we know it.”

For the first 51 minutes of the game, the Lions had kept Josh Allen in check, limiting him to 164 yards passing and getting an interception.

One more stop would have put the Lions closer to a fourth straight win and an upset of a Super Bowl contender.

They couldn't get it.

Allen went 7 for 8 for 49 yards and ran twice for another 17 yards. The one time he was in trouble was when a pair of incomplete passes would have made it third-and-10 at the Lions 15, but Austin Bryant was called for roughing the passer. Two plays later, Allen hit Stefon Diggs for a 5-yard touchdown, but Bills kicker Tyler Bass gave the Lions a chance by missing the extra point to make it 25-22.

Jared Goff got the Lions to the Buffalo 33, where they faced third-and-1 with 32 seconds left.

Instead of running the ball, Goff went deep for D.J. Chark, who was open, but appeared to run a different route than his quarterback expected.

“We had some options on that play, and we could have read them better, but if I throw a better ball, it probably doesn't matter,” Goff said.

“Unfortunately, that's going to be the play that gets focused on, but there were other plays that could have gone either way.”

Even though kicker Michael Badgley had missed an earlier 29-yard attempt, Campbell sent him out for a tying attempt from 51 yards. He made it, tying the game at 25 with 23 seconds to play.

Again, the defense needed a stop and again, they didn't get it.

The Bills took over on their 25 and Allen hit Diggs for 36 yards on first down, moving the ball to the Lions 39.

“Obviously, that's a hell of a quarterback making plays at a crucial point in the game, and another making a heck of a play to make those catches,” Campbell said. “There were things we could have done better, but that quarterback is the real deal. He's a warrior and he made a lot of significant plays.”

Buffalo was still looking at a 57-yard field goal with a kicker who had just missed an extra point.

Allen, though, ran for 12 yards on the next two plays to move the kick into a much better position.

Sure enough, Bass drilled the 45-yarder to give the Bills their second win at Ford Field in less than a week.

On the final two drives, Allen went 8 for 9 for 85 yards and a touchdown while also adding 29 rushing yards. He finished with 331 combined yards, the eighth time an opposing quarterback has reached 300 in Detroit's 11 games. In contrast, Goff has only gotten there twice.

Still, November started with the Lions at 1-6 and heading for another lost season. The month will end with them at 4-7 with wins over Green Bay, Chicago and the Giants, plus a close loss to the Bills.

“These aren't the same old Lions,” offensive tackle Taylor Decker said. “We're going to go out there and earn our respect.”

“I feel like they aren't getting enough credit for how good they are," Diggs said.