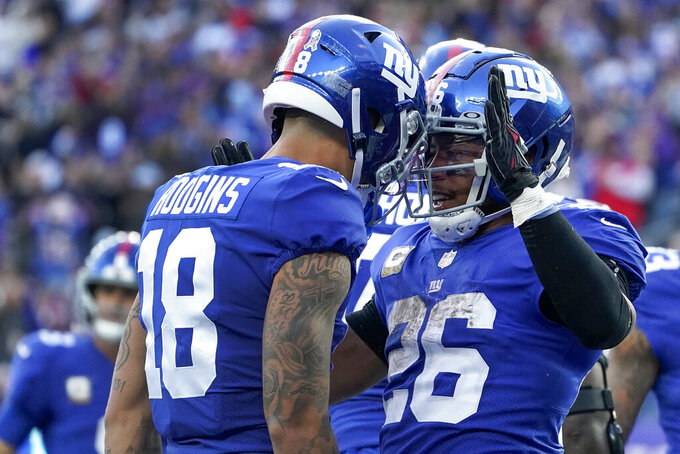 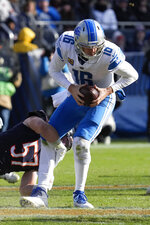 TURNOVER DIFFERENTIAL: Lions minus-2; Giants plus-4.

LIONS PLAYER TO WATCH: LB Alex Anzalone. He will lead the team's scheme against RB Saquon Barkley. The sixth-year pro led Detroit with 10 tackles, forced a fumble and defended a pass last week and has a team-high 72 tackles in nine games.

GIANTS PLAYER TO WATCH: DT Dexter Lawrence. The 2019 first-round pick has been unstoppable lately. He had five tackles, a sack, five quarterback pressures and a pass defensed against Houston. He has a career-high five sacks.

KEY MATCHUP: Barkley against Detroit's defense. He had 64 yards rushing, 79 yards receiving and a receiving TD in a loss three years ago to the Lions. The NFL's leading rusher is averaging 103 yards. Barkley is going against the 31st-ranked team against the run that gives up 161 yards rushing per game.

KEY INJURIES: Lions C Frank Ragnow was wearing a walking boot on his left foot after the previous game. ... Rookie WR Jameson Williams, whose college career at Alabama ended with a knee injury, is nearing his NFL debut that may be Dec. 4 against Jacksonville or the following week against Minnesota. ... Giants TE Daniel Bellinger (eye) has missed the past two games. ... OT Evan Neal (knee) is practicing for the first time since being hurt on Oct. 23. ... S Dane Belton (chest) was limited after being hurt Sunday, but he should be ready.

SERIES NOTES: The Lions have won the past two, but both teams have changed dramatically since the previous game. This is the third time in the past four games the teams have played at MetLife Stadium. Lions coach Dan Campbell was drafted by the Giants in 1999 and played with them until 2002. This will be his second game coaching against them. He was the Dolphins' interim head coach in 2015 when New York won 31-24. Detroit is aiming for its first three-game winning streak in the series, which goes back to 1930, since winning five in a row from 1964-74.

STATS AND STUFF: Detroit is coming off its first road win under Campbell and has won consecutive games for the first time with him in his two seasons. ... The Lions haven’t won two straight road games and three games in a row since November 2017 in coach Jim Caldwell's last season that ended with a 9-7 record and his firing. ... Detroit didn’t have a turnover in Chicago and has lost the ball just once in the past three games. In the three previous games, all of which were losses, the Lions turned the ball over nine times, including five giveaways against Dallas. ... The Lions have scored 30-plus points in four games, matching the league-high total with Buffalo, Kansas City, Miami and Seattle. ... RB Jamaal Williams has nine rushing TDs, ranking second in the NFL. ... WR Amon-Ra St. Brown has 139 receptions, the most by a player drafted in the fourth round or later in his first 25 games. ... Jeff Okudah is NFL's only DB with 50 tackles, an INT and forced fumble. ... DE Aidan Hutchinson leads rookies with 5 1/2 sacks. ... Giants QB Daniel Jones has completed 145 straight pass without throwing an interception. His previous pick was against Dallas in Week 3. ... New York ranks fourth in the NFL in time average time of possession (32:04). ... Wink Martindale's defense leads the NFL with 10 recovered fumbles. ... WR Darius Slayton caught three passes for 95 yards and a TD last week. He had two TD catches in the previous game against Detoit. ... DL Leonard Williams led the team with nine tackles last week. ... LB Jihad Ward has had tackles for losses in four of his past five games at MetLife, and a sack in two of his past three at home. ... CB Fabian Moreau has two interceptions in three games against the Lions.

FANTASY TIP: Barkley for the second straight game. He delivered against Houston, scoring a TD and gaining 152 yards on a career-high 35 attempts. He leads the NFL with 931 yards rushing and ranks second with 1,128 yards from scrimmage entering Week 11. He's also had a TD in four of five games at home this season.