Lions host Seahawks in matchup of teams aiming for .500 mark 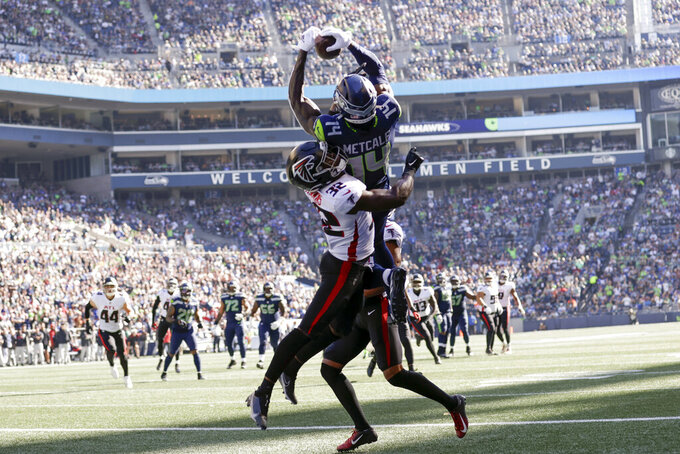 Seattle Seahawks wide receiver DK Metcalf, above, makes a catch in the end zone for a touchdown as Atlanta Falcons safety Jaylinn Hawkins defends during the first half of an NFL football game Sunday, Sept. 25, 2022, in Seattle. (AP Photo/John Froschauer)

OPENING LINE: Lions by 4½, according to FanDuel Sportsbook.

TURNOVER DIFFERENTIAL: Lions even; Seahawks minus-1.

SEAHAWKS PLAYER TO WATCH: RB Rashaad Penny. Penny had a career-high 170 yards rushing and two touchdowns in Week 17 last year against Detroit. Penny surpassed his career high the next week with 190 yards against Arizona. This season, he is averaging 4.4 yards per carry on 32 attempts.

LIONS PLAYER TO WATCH: RB Jamaal Williams. RB D'Andre Swift is banged up, as he often has been during his brief career, and that will open up more opportunities for Williams. He has taken advantage so far this season with 168 yards rushing and four TDs.

KEY MATCHUP: Detroit's run game against Seattle's defense. With Swift injured, the Lions will lean on Williams and Craig Reynolds to establish the running game they need to set up QB Jared Goff for play-action passes. The Seahawks might be accommodating because they're giving up 157 yards a game on the ground to rank among the league's worst.

KEY INJURIES: The Seahawks are hopeful DE Shelby Harris will play after missing last week's game. ... Backup RB and special teams ace Travis Homer went on IR with a rib injury. ... Swift may miss a couple of weeks to rest his injured ankle and shoulder. ... S Tracy Walker is out for the season with an Achilles tendon injury. ... WR Amon-Ra St. Brown did not practice Wednesday because of an ankle injury. ... G Jonah Jackson has missed two straight games with a finger injury.

SERIES NOTES: Seattle has won four straight games against Detroit, including a 26-6 playoff win on Jan. 7, 2017, in what was the Lions' most recent postseason appearance. ... The teams are meeting in two straight seasons for the first time. ... If the Seahawks win, they will match their longest winning streak in the series that spanned from 1978 to 1990.

STATS AND STUFF: QB Geno Smith is one of seven QBs in the league with a 100-plus passer rating. ... Smith completing an NFL-best 77.5% of his passes. Last week against Atlanta, he had a career-high 32 completions for 325 yards passing for third-highest total and most in a game since 2014 . ... WR Tyler Lockett, who was held to three receptions and 28 yards in the opener, had nine catches in each of the past two games and his 21 receptions are tied for seventh in the league. ... TEs Noah Fant, Will Dissly and Colby Parkinson have combined for 21 catches and three TDs after Seattle had just five touchdowns from tight ends last season. ... Rookie DE Boye Mafe is expected to get more playing time after a strong game in Week 3. ... Rookie CB Tariq Woolen had first career INT last week, the only pass picked off this season by the Seahawks. ... Detroit led at Minnesota last week 14-0 midway through the second quarter and by 10 points midway through the fourth before giving up a game-winning TD with 45 seconds left. Coach Dan Campbell lamented his decision to attempt a 54-yard field goal with 1:14 left, leading by three points. ... Detroit is favored by the most points since it was a six-point favorite on Oct. 27, 2019, against the New York Giants, whom it beat by five points. ... QB Jared Goff threw for a season-high 277 yards against Vikings. In his past five home games, he has 14 TDs and just two INTs. ... Williams had 107 combined yards last week and is the NFL's only player to run for two TDs in two games this year. ... WR Josh Reynolds had six catches for team-high 96 yards at Minnesota. ... LB Alex Anzalone led Lions with 10 tackles last week.

FANTASY TIP: Penny is due for a breakout game. He had a season-high in yards (66) and carries (14) last week against Atlanta and playing the Lions may help him flourish as he did against them as part of a strong closing finish last season.