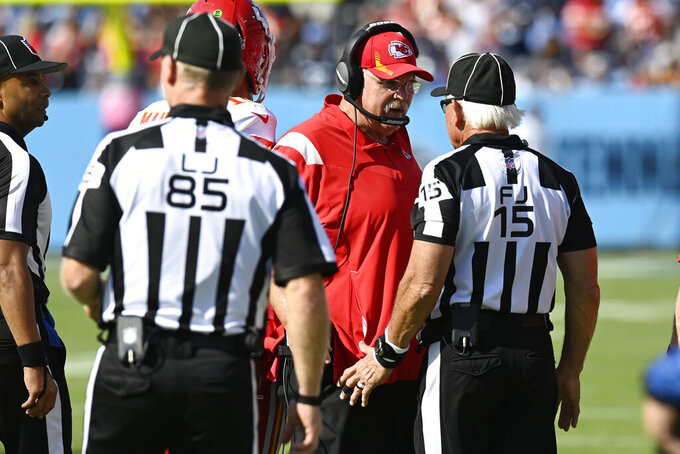 NASHVILLE, Tenn. (AP) — Chiefs quarterback Patrick Mahomes takes the blame for his two turnovers against Tennessee, saying he pressed too much trying to make something happen.

That still leaves the Kansas City Chiefs with a big turnover problem, an issue this team hadn't dealt with much in hosting the AFC championship game the past three seasons.

The Chiefs turned the ball over three times Sunday losing 27-3 to Tennessee, and the Titans turned an interception of Mahomes and his fumble into 10 points late in the first half.

“It’s kind of been one thing here and there each and every week,” Mahomes said. “It’s not like a whole overarching one thing, and today it was probably me. I just pressed a little bit too early in the game and then we got down we were in the mode where (we had to go) no huddle, which you don’t want to be in in the NFL.”

Kansas City (3-4) now has one more turnover already this season (17) than the 16 giveaways in all of 2020. Mahomes has 11, including nine interceptions, for the most the 2018 NFL MVP has had in a single season, counting the playoffs. That ties him with Jaguars rookie quarterback Trevor Lawrence for most in the NFL.

“We got to eliminate the turnovers and the penalties,” Kansas City coach Andy Reid said. “Again, these are things that we haven’t — haven’t been common to us. I’m seeing things that I haven’t seen before. And we just got to fix it. And the players, they know that.”

The Chiefs came into Sunday ahead of only Jacksonville in turnover margin at minus-8 and a league-high 14 turnovers. The Jaguars had their bye, so the Chiefs will be tied with Jacksonville for last in that category at minus-10.

The turnovers are coming in bunches now too. This was the third straight game Kansas City has turned it over at least three times, and the Chiefs turned it over four times in losing to the Los Angeles Chargers earlier in the season.

Chiefs wide receiver Byron Pringle said everyone needs to look at themselves in the mirror and come in ready to play. With Kansas City winning five straight AFC West titles and playing in the AFC championship the past three seasons and winning the 2020 Super Bowl, everyone is ready to play the Chiefs.

Having some early turnovers this season also has opponents eager to join the feeding frenzy at Kansas City’s expense.

“We figured a lot of teams would come and hold us up and punch the ball out,” Pringle said. “We just have to protect the ball. That’s our prize. We’ve got to protect the prize if we want to win the game.”

Mahomes said he just has to be better earlier in games so the Chiefs don't fall behind the way they did against the Titans. Reid said as play-callers, the coaches need to look at what they can do to help the offense get rolling earlier.

The Chiefs have lost two of their past three. Worse, they're 1-4 against AFC teams and tied with Denver at the bottom of the division they've dominated for five seasons.

Not turning the ball over would be a good start.