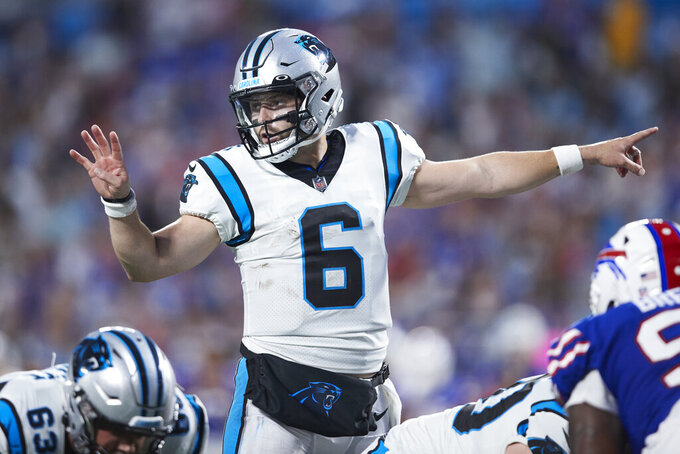 FILE - Carolina Panthers quarterback Baker Mayfield (6) changes the offense at the line of scrimmage during an NFL preseason football game against the Buffalo Bills, Saturday, Aug. 26, 2022, in Charlotte, N.C. The “Baker Bowl” is one of the highlight games of the NFL’s Week 1 calendar as Baker Mayfield, the No. 1 pick in the 2018 draft, and the Panthers host the Browns on Sunday. (AP Photo/Brian Westerholt, File)

CHARLOTTE, N.C. (AP) — The NFL’s fieriest quarterback playing against the team that unceremoniously discarded him after four seasons.

Better get your popcorn ready, folks — this could get entertaining.

The “Baker Bowl” is one of the standout games on the Week 1 calendar as Baker Mayfield, the No. 1 pick in the 2018 draft, and the Carolina Panthers host the Cleveland Browns on Sunday.

Mayfield said the Browns' decision to replace him with Deshaun Watson came "abruptly and unexpectedly,” but added he's happy in Carolina where he hopes to re-establish himself as a franchise QB.

“We’re here now," Mayfield said. “Everything happens for a reason and I’m rolling with the punches.”

Mayfield, who has a reputation for playing with a chip on his shoulder in revenge games, is unlikely to have forgotten — or forgiven — the Browns for how they treated him.

Two weeks ago, a sideline reporter revealed that Mayfield said he was "going to (expletive) them up” when referring to the Browns. Mayfield has denied uttering those words, but the exchange added hype to what's expected to be an emotionally charged atmosphere at Bank of America Stadium.

Panthers offensive coordinator Ben McAdoo said the fifth-year QB has been all business this week, calling Mayfield a “pro.”

“Just in conversations with Baker it has been, ‘Let’s just focus on the particulars of preparing to play a game,'” McAdoo said. “We all understand this is a professional environment, not a personal environment.”

The Browns anticipate they'll see Mayfield's fire at some point.

The Panthers went 5-12 last season and finished with the second-most turnovers in the league. Their hope is Mayfield can limit mistakes, while allowing him the freedom to be himself and use his skills as a playmaker.

“We can’t be chasing perfect plays," McAdoo said. “We have to keep ourselves out of the bad ones.”

McAdoo said Mayfield will have plenty of opportunities to call audibles at the line of scrimmage, adding that “if I don’t trust the quarterback in this offense, then I don’t trust myself.”

Said Mayfield: “This system is going to fit me well."

“It’s Browns versus Panthers,” Stefanski said. “It’s pretty simple. We have to prepare for their offense, their defense, their special teams, so that’s where our focus is.”

The Browns will have to wait to see their new franchise QB.

Journeyman Jacoby Brissett gets the start under center with Watson — who signed a fully guaranteed five-year, $230 million contract — serving an 11-game suspension to start the season. Watson agreed to the suspension after two dozen women accused him of sexual assault or harassment.

Other things to know about the Browns-Panthers Week 1 matchup:

As bad as they’ve been for most of the past two decades, perhaps no statistic underscores the Browns’ struggles like this one: They’re 1-21-1 in season openers since 1999.

Cleveland’s Week 1 misery has included blowouts and last-second losses. Last year, the Browns’ 33-29 setback at Kansas City in their hyped opener — the game swung when then-Browns punter Jamie Gillan dropped a snap — set the tone for a dismal season.

Although it’s just one game, the Browns know it’s vital to win it.

“It’s very important,” Brissett said. "Coach has been preaching to us that we have to make sure we come out and get off to a fast start."

Some of Cleveland’s offensive issues last season were connected to Kareem Hunt’s absence.

The talented running back missed nine games with injuries, and when he was out the Browns lacked the 1-2 punch he provides as a complement to Chubb, who rushed for 1,259 yards in 14 games.

Hunt held himself out of drills in practice this summer in protest when the Browns declined to give him a contract extension. There may still be some tension, but Chubb is confident his teammate and close friend won’t be distracted.

“He loves football, he’s passionate about it and he loves playing with us on this team, so at the end of the day, he’s going to put his pads on, go out there and play hard for us no matter what,” Chubb said.

THROWN INTO THE FIRE

Panthers rookie left tackle Ickey Ekwonu will be thrown into the fire in his first start.

The No. 6 overall pick in April's draft expects to be lined up across from All-Pro defensive end Myles Garrett on some plays. Garrett has 58 1/2 sacks in five seasons with the Browns and four straight double-digit sacks seasons, including a career-high 16 last year.

Ekwonu struggled with pass protection during training camp, and it took several weeks before he was named the starter.

When asked if he'd prefer to get his feet wet against a less talented player, Ekwonu laughed and said, “I can't really chose my battles. ... Whoever is front me, I have a job to do and they have a job to do — and may the best man win.”

Coach Matt Rhule said the Panthers plan to give Ekwonu some help in pass protection, but added “you can't do that the entire game.”

The Panthers are hoping Christian McCaffrey can bounce back from two injury-plagued seasons and return to his 2019 form when he became only the third player in NFL history to surpass 1,000 yards rushing and 1,000 yards receiving in a season.

Rhule said McCaffrey is “in the best shape of his life” and has no plans to limit the running back's touches for fear of injury.

The Panthers believe they have the best group of cornerbacks in the NFL with two former top 10 draft picks (Jaycee Horn and C.J. Henderson) and Donte Jackson, a second-round pick.

“Now we have to go out there and show it and put it on tape,” Horn said. “It is one thing to say we are going to be the best, and it's another going out there and being the best.”