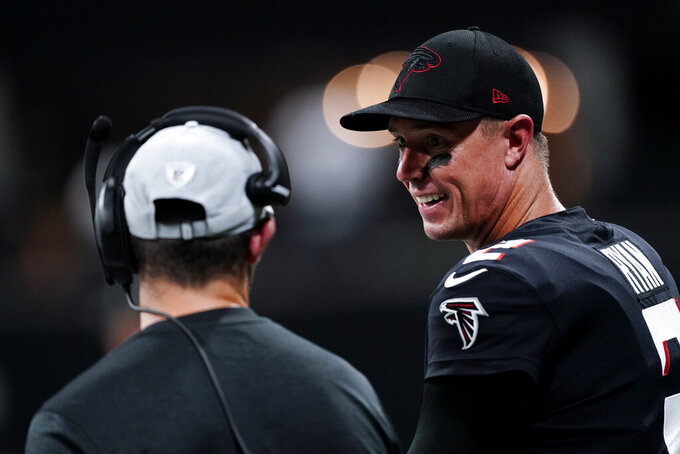 Atlanta Falcons quarterback Matt Ryan, right, stands on the sidelines during the first half of a preseason NFL football game against the Cleveland Browns, Sunday, Aug. 29, 2021, in Atlanta. (AP Photo/John Bazemore) 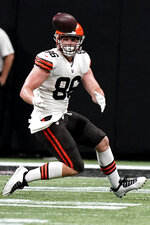 ATLANTA (AP) — Baker Mayfield finally got a chance to play in the preseason.

It didn't last long, but he sure made the most of it.

Mayfield led a pair of impressive drives in his preseason debut, capping the second with a 22-yard touchdown pass to KhaDarel Hodge that sparked the Cleveland Browns to a 19-10 victory over the Atlanta Falcons on Sunday night.

Mayfield was 6 of 10 for 113 yards in the NFL's final game of the preseason. Teams must get down to the 53-man roster limit for the regular season by Tuesday.

Mayfield called it a night after Cleveland's second possession, making way for Case Keenum and Kyle Lauletta to finish off a 3-0 exhibition campaign for the Browns ahead of a highly anticipated season. Lauletta had two interceptions but also threw a clinching TD pass with 1:57 remaining.

They passed on a chance to give quarterback Matt Ryan his first snaps of the preseason. Instead, Atlanta focused on evaluating the backups.

Undrafted rookie Feleipe Franks played the first two quarters before Arizona's former first-round pick Josh Rosen took over after halftime, looking to jump-start a disappointing career that has seen him bounce around to five teams in four years.

“I show up early, stay late, grip it and rip it, and hope for the best," Rosen said.

He completed 9 of 18 for 118 yards, including a 7-yard pass to Juwan Green in the fourth quarter for Atlanta's lone TD.

“We've got to figure out what our quarterbacks can do,” said Smith, who didn't rule out going in an entirely different direction after other teams make their cuts.

Browns coach Kevin Stefanksi decided to give Mayfield a quick look behind most of his starting line.

Mayfield led the Browns 66 yards in eight plays after the opening kickoff. He connected with Austin Hooper on a short pass that turned into a 35-yard gain when both Atlanta safeties committed to a receiver cutting over the middle and left the former Falcons tight end all alone down the sideline.

The drive ended with the Browns going on fourth-and-6 at the Falcons 9. Hooper couldn't hang on to Mayfield's pass and it looked like he would've been short of the first down anyway.

Not to worry. Mayfield drove the Browns all the way to the end zone on his second and final series.

He connected with Hodge on a 20-yard gain to the Falcons 22, then went back to him on the very next play for a touchdown at the left pylon. Rolling to his left and throwing off his back foot with a rusher in his face, Mayfield delivered a perfectly thrown ball to Hodge, who beat cornerback Chris Williams and hauled in the pass while tumbling across the goal line.

“He just makes things happen," Mayfield said. “He's not a very big guy, but he's very physical. I'm happy we have him on our team.”

Franks completed 5 of 8 passes for 66 yards, which included a 27-yarder to first-round pick Kyle Pitts making his first appearance of the preseason.

Rosen, the No. 10 pick in a 2018 draft that led off with Mayfield going to the Browns with the top choice, is getting another shot in Atlanta after projected backup AJ McCarron went down with a season-ending knee injury in a preseason loss at Miami.

Rosen lost a fumbled snap on his first possession — not really surprising given he only signed with the team five days earlier — and coughed it up again when hit on a fourth-down play in the closing minutes.

He also guided the Falcons to a first-and-goal at the Cleveland 1 before the drive fizzled out after he took a sack.

“I feel good right now," Smith said. “But you never know who's going to become available.”

After earning his spot in the league as an undrafted free agent, Hodge is bidding for a bigger role with the Browns.

It was the second straight week that the special teams star has hauled in a touchdown pass.

“My confidence right now is through the roof,” Hodge said.

The craziest play of the night came late in the third quarter.

Lauletta was hit as he threw and the pass was intercepted by linebacker Kobe Jones, who took off the other way on a 42-yard return. But he carried the ball sloppily with just one hand, allowing Jordan Franks to slap it away. Offensive lineman Colby Gossett fell on the loose ball to give possession back to the Browns.

Cleveland ruled out eight players before the game because of injuries, including CB Greedy Williams (groin) and lLB Sione Takitaki (hamstring). Then, in the second quarter, OG Drew Forbes hobbled off the field with a knee injury. He did not return.

Falcons: Host the Philadelphia Eagles in their regular-season opener on Sept. 12.