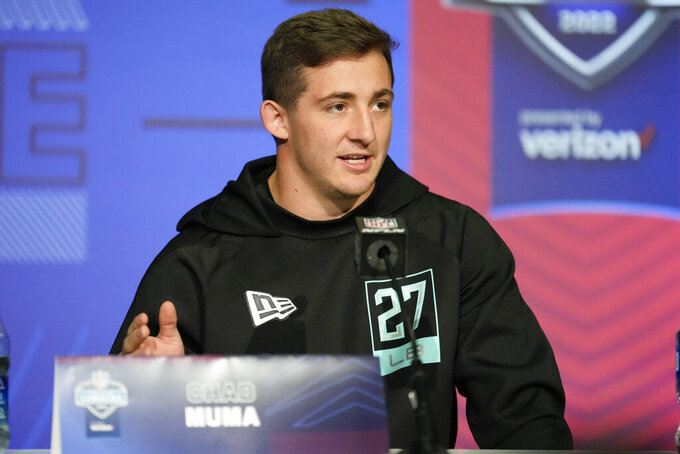 FILE - Wyoming linebacker Chad Muma speaks during a press conference at the NFL football scouting combine in Indianapolis, Friday, March 4, 2022. Muma wears an insulin pump that's paired with a continuous blood glucose monitor when he's not on the field. He tests his blood sugars halfway through practices “and for games I test at each quarter and if I need insulin, I will actually give myself a shot during the game based on what my numbers are.”(AP Photo/AJ Mast, File)

Former University of Wyoming star linebacker Chad Muma was 13 years old when he was diagnosed as diabetic. The first thing he did was search “NFL players with diabetes.”

The seventh-grader from Lone Tree, Colorado, was both relieved and delighted when the name of a Denver Broncos player popped up first.

“It was Jay Cutler at the time who was the big one because I was from Denver and a huge Broncos fan,” Muma recounted. “It's definitely cool to see people with diabetes doing what they're able to.”

Muma initially thought his days of playing sports were over when the doctor told him he had Type 1 diabetes.

“My first thought was, ‘Man, I’m not going to be able to play sports anymore or go play college football,” Muma said. “But I learned quickly that's not the case at all.”

As long as he controlled his diabetes to prevent complications, there was nothing he couldn't do like he had before, and that included pursuing his dream of playing in the NFL.

He started paying closer attention to his diet and getting regular hemoglobin A1C tests, which measure blood sugar levels over three months, to stay on top of the disease.

“It's more so being really disciplined with what you put into your body and making sure you're staying on top of it," he said.

Muma now wears an insulin pump that's paired with a continuous blood glucose monitor when he's not on the field. He tests his blood sugars halfway through practices and every quarter during games.

Muma is set to join a handful of other diabetics in pro football, including Baltimore Ravens tight end Mark Andrews, when the NFL holds its draft in Las Vegas this weekend.

Scouts love his game and draft experts rate him even higher than linebacker Logan Wilson, his former teammate at Wyoming who was a third-round selection by the Cincinnati Bengals in 2020.

Muma is projected as an early second-round draft pick, if not a late first-rounder.

“Chad Muma from Wyoming is just an absolute animal the way he plays the game,” ESPN draft analyst Todd McShay said. “He plays fast and he plays hungry. I love his style.”

NFL Network analysist and former scout Daniel Jeremiah called Muma “one of my favorites to watch.” He stacks him at the top alongside Montana State's Troy Anderson “as kind of these big, rangy, athletic, off-the-ball linebackers."

While Anderson ran the 40-yard dash in 4.42 seconds and Muma in 4.63, Muma has “incredible instincts,” Jeremiah said. "You would give Anderson the edge being a little bit faster, but Muma is so quick to see things, to kind of key in and diagnose, as we like to say. He’s just always around the football.

“He trusts his eyes. There’s no hesitation to his game. He’s got timing and bursts as a blitzer. Outstanding in coverage with his instincts. There’s a lot of similarities there with Logan Wilson, obviously same school,” Jeremiah added. “I think he’s going to go probably in the 30s, 40s is probably when he comes off the board. I think he’s going to be a great player.”

What sold ESPN draft analyst Mel Kiper Jr. on Muma was his touchdown-saving tackle in the Senior Bowl when he chased down Liberty quarterback Malik Willis, considered by many the top running QB in this draft class.

Willis took the snap near midfield as the first quarter was coming to an end, tucked the ball and starting zipping past defenders like he was some cheat code in a video game.

“He’s gonna score a touchdown here. He’s gonna run all the way in. Nobody was able to get him and at the 5-yard line who tackled him? It was Chad. Chad Muma saved a touchdown there,” recounted Kiper. “That’s what he does. He’s a really good tackler. He’s so smart. He’s so knowledgeable in terms of the defense, instinctive, as well.”

Colorado State University could have had Muma but the school pulled its scholarship offer when Muma sustained a partially torn patella tendon at Legend High School in Parker, Colorado.

“I haven't had any (knee) issues since then and it's been all good,” Muma said.

While in high school, Muma participated in a peer diabetic group where he spoke with middle schoolers who also had diabetes. And during a day off from summer workouts last year, Muma traveled to Casper Mountain to share his story at Camp Hope, a program for diabetic children.

“These younger kids who are first getting diagnosed and they don't know about diabetes, it goes back to my story when I was looking at NFL players with diabetes," Muma said. “It's good to have someone that advocates for them" so they can "see that they're really able to go do whatever they want and have whatever dreams they have.”