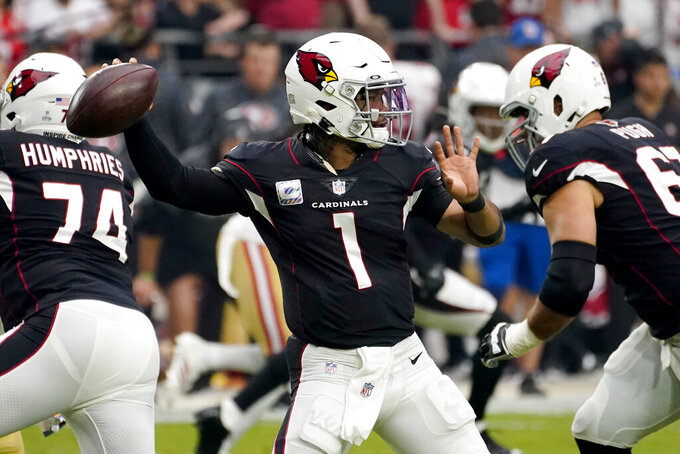 OPENING LINE: Browns by 3, according to FanDuel SportsBook.

CARDINALS PLAYER TO WATCH: DE J.J. Watt. The veteran pass rusher has made his presence felt over the past few weeks, even if his box score numbers don't show it. He had his first tackle for a loss of the season last weekend and came up with a crucial pass deflection on fourth down in the fourth quarter. If LB Chandler Jones remains on the reserve/COVID-19 list, Watt will draw even more attention from Cleveland's blockers.

BROWNS PLAYER TO WATCH: DE Myles Garrett. The league's sacks leader, Garrett has been a nearly unstoppable force all season. His ability to draw double- and triple-teams allows his teammates to make plays. Garrett has long admired Watt and will want to outperform the game's other star end.

KEY MATCHUP: Cardinals QB Kyler Murray vs. Browns rookie LB Jeremiah Owusu-Koramoah. Murray's speed and ability to make a big play from a broken one places enormous stress on a defense and requires someone to “spy” on him. That will likely be Owusu-Koramoah, whose job will be to not let Murray get away.

KEY INJURIES: The Cardinals hope CB Byron Murphy Jr. can return after missing the 49ers game with rib injuries. CB Marco Wilson has been ruled out. ... Jones was put on the COVID-19 list on Tuesday, and coach Kliff Kingsbury, who is also on the list and will miss the game, said Jones is “very doubtful.” ... TE Maxx Williams (knee) will miss the rest of the season after getting hurt against the 49ers. ... C Rodney Hudson (ribs) left the 49ers game in the third quarter and was replaced by Max Garcia. ... Browns RB Nick Chubb will miss the game with a calf injury. ... Browns WR Jarvis Landry was designated for return after three games on injured reserve, but it's not clear if he'll play. ... The Browns had an All-Star roster of injured players at the start of the week. The most prominent ones were DEs Myles Garrett (ankle, knee) and Jadeveon Clowney (elbow, knee), Kareem Hunt (wrist, knee), RT Jack Conklin (knee) and LT Jedrick Wills Jr. They're all listed as questionable.

SERIES NOTES: The Browns have dominated, but not since their expansion rebirth. Cleveland is just 1-5 since 1999 against Arizona with the lone win coming in 2003. ... This will be the second matchup between Murray and Browns QB Baker Mayfield, close friends who won back-to-back Heisman Trophies at Oklahoma.

STATS AND STUFF: Murray leads the NFL by completing 75.2% of his passes. ... The Cardinals are on the road for the fourth time in the past six weeks, including three of the past four. ... Murray got the best of Mayfield in their first meeting, a 38-24 Arizona win in Week 15 of the 2019 season. ... There are four players in the NFL with at least four rushing TDs this season. Three of them will be on the field Sunday in Cleveland: Cardinals RB James Conner (five TDs) and Browns RBs Kareem Hunt (five) and Nick Chubb (four). ... The Cardinals have a 5-0 record for the first time since 1974. They have won all three of their road games this season by at least 12 points. ... The Browns begin a stretch of three home games in 14 days. ... Cleveland racked up 532 yards of offense, scored 42 points and didn't commit a turnover last week and still lost — the first team to do that. ... Mayfield bounced back from a poor performance by completing 23 of 32 passes for 305 yards and two TDs last week. ... The Browns are the only team to rank in the top five in total defense and total offense. ... In addition to yards rushing (938), the Browns lead the NFL in rushing TDs (12), average per carry (5.4) and rushing first downs (51). ... Chubb had 161 yards last week and is second in the league with 532. ... The Browns haven't figured out how to get WR Odell Beckham Jr. involved in their offense. He has just nine catches for 124 yards in three games. ... TE David Njoku had a breakout game at Los Angeles with seven catches for 149 yards, including a 71-yard TD. ... Browns P Jamie Gillan has been having a tough season, ranking among the league's worst in net average and kicks inside the 20.

FANTASY TIP: Injuries knocked Browns cornerbacks Denzel Ward and Greedy Williams out of last week's game and both are not 100%. That might allow Cardinals WR DeAndre Hopkins to build off last week, when he had six catches for 87 yards and a touchdown.