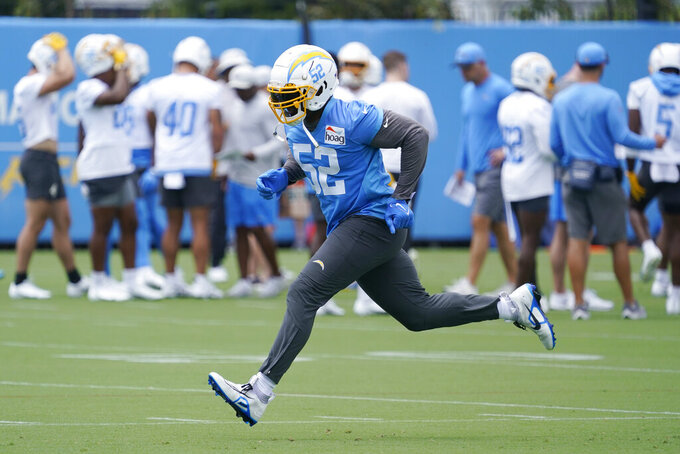 COSTA MESA, Calif. (AP) — It has been a busy offseason for Khalil Mack since being traded from the Chicago Bears to the Los Angeles Chargers.

In addition to becoming familiar with new teammates and getting up to speed on a new defense, the outside linebacker has been rehabbing from last year's foot surgery.

Considering everything that has gone on the past three months, Mack seems pleased with his progress.

“I can’t help but feel part of things. At the same time, there’s still an adjustment learning names, faces and all of those different things. It’s coming along,” he said.

Mack has spent most of the practices working on the side, but he was participating in the 11-on-11 walkthroughs during the first day of minicamp on Tuesday. He said the rehab process has been smooth so far and that he should be ready for the start of training camp in late July.

Mack is going into his ninth NFL season. He got off to a strong start in Chicago last season with six sacks in seven games before being placed on injured reserve in November and undergoing foot surgery.

Coach Brandon Staley said Mack has been able to do some individual drills. Staley, who was Mack's linebacker coach in Chicago in 2018, also noted that Mack is picking up on the defense during walkthroughs.

Staley's defense carries a lot of similarities in terms of techniques and languages from the system Vic Fangio ran in Chicago that season.

“I can tell that Khalil has confidence in his assignments. It doesn’t need to go full speed for you to be able to tell if a player knows it or not,” Staley said. “I can tell when Khalil is confident, when he gets into that familiar stance that I know all too well.”

Mack and cornerback J.C. Jackson were the biggest upgrades on a defense that was ranked 23rd in the league last season, but near the bottom in stopping the run and third-down conversions. The Chargers have also added defensive linemen Sebastian Joseph-Day, Austin Johnson, Morgan Fox and linebacker Kyle Van Noy.

For the past three weeks, Mack and Joey Bosa have spent plenty of time getting familiar with each other. Mack has long admired Bosa’s game, especially with how he uses his hands.

Bosa, who normally doesn't show up for offseason workouts until one week before minicamp, showed up two weeks ago during the early portion of organized on-field practices.

“He’s very smart. He’s a smart rusher. He thinks about a lot of things. Sometimes, he probably gets too far in his head because he knows so much," said Mack of Bosa. "He has so much knowledge about the game. It’s going to be fun to kind of break down film together, watch each other and figure this thing out together.”

Bosa said the praise from Mack has been flattering and that they have been bouncing ideas off each other since they have different styles.

Bosa and Mack have discussed having film sessions leading into training camp where they break down each other's old film to see if they can pick up anything new.

“He’s the guy that I feel like, early on, he was one of the guys I looked at and was like, ‘Dang, I have to compare to these guys? I can’t do that.’ But, obviously, I’ve really worked hard to kind of get to that point,” Bosa said.

"I think we complement each other really well. Obviously, we’re not going to totally switch up what we do, but if we could learn something here and there from each other — just a guy with experience like that, I’m really excited just get out there and see what it’s like together.

"Having a guy like that to compete with every day, I always want to be the best rusher out there and perform the best in the group, so to have that competition every single day, I think that’s going to drive me to be a lot better this year.”