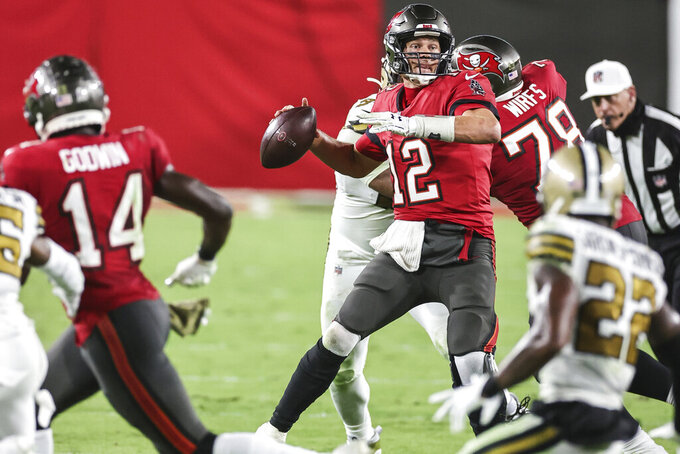 The NFL was not expected to be immune from the ratings declines that have hit all sports this year due to the coronavirus pandemic and presidential election. But the declines are not as bad as feared at the beginning of the season.

Games are averaging 15.1 million television and digital viewers, according to the league and Nielsen, a 6% decline from last year. Despite the decreases, all but four of the top 30 shows since the season began have been NFL games.

“Considering all the issues the NFL has had to deal with, the ratings are OK,” said Neal Pilson, the former president of CBS Sports who now runs his own sports television consulting company. “It hasn't been a great year for ratings considering everything that has happened, but they aren't in the toilet either.”

Sports consultant Marc Ganis cited the lack of preseason games to build up fan interest, and all four major professional sports playing in September as other reasons for this year’s slow start.

The ratings also didn't suffer precipitous declines compared to the last presidential election cycle in 2016, when they were down 14% compared to 2015.

“I know there have been lots of, well, ‘NFL ratings are down.’ Not really. Election years, they’ve been going down for the last three election cycles, not just the last one,” Ganis said. “The NFL ratings have actually been quite good. They’re going to get better now that the election is over. The gap between the NFL and all the other sports in terms of TV ratings has grown. So the NFL has gotten stronger vis a vis other sports.”

The Thursday and Sunday night packages have suffered the biggest declines with each package down 16%.

NBC's “Sunday Night Football” is averaging 17.2 million and remains on pace to be primetime's top show for the 10th straight year. There were five straight weeks when NBC's games faced competition from NBA or MLB playoff games.

NBC has had tough luck the past two weeks. It had Dallas-Philadelphia on Nov. 1 while the New Orleans-Tampa Bay matchup last Sunday was a blowout by halftime. The first half this past week averaged 18.9 million viewers, which was the highest since the Cowboys-Rams game in Week 1.

Fox is averaging 12.8 million for “Thursday Night Football.” Some factors in their lower audiences include one of their games being moved to a late Monday afternoon (Kansas City-Buffalo) and another going against the final presidential debate (Giants-Eagles).

“I think the election was kind of a pivotal moment. We have seen the skyrocketing of cable news ratings. Now that the election (story) is nearing an end I think people will go back to kind of normal consumption patterns. So we think we have weathered the storm,” NBC Sports Group chairman Pete Bevacqua said. “We really believe with the schedule, particularly with us having the ability to flex games, should be unbelievably strong as we enter into the second half of the season.”

It's not all bad news for primetime packages: ESPN's “Monday Night Football” numbers were flat through the first eight weeks at 11.71 million.

CBS has rallied over the past five weeks and is down only 1%, while Fox has had a 6% decline. Both networks have faced competition from cable news, especially during the early afternoon window. The late afternoon numbers for both are flat.

“There’s been so much competition, but we've had some terrific ratings. Cable news has been up 50 to 75% on weekend afternoons because of interest in the election,” CBS Sports chairman Sean McManus said.

CBS is averaging 17.84 million viewers, up 9% over the same period last season. Last Sunday's Pittsburgh-Dallas game averaged 22.72 million. The network's highest-ranked games were Giants-Cowboys in Week 5 and San Francisco-New England in Week 7, when both averaged 23 million.

Fox, which is averaging 17.4 million, has the season's three most-viewed games. The first Saints-Buccaneers matchup, which was Tom Brady’s debut with Tampa Bay, was Fox’s featured Sunday game on opening weekend and averaged 26.3 million.

“Everything affecting the NFL is temporary,” Fox Sports senior vice president Michael Mulvihill said. “There's not going to be an election, we should be back to having live attendance, and hopefully there will be a better NFC East (which has been another factor in Fox's declines).”

In what isn't a surprise, Brady's move to Tampa Bay has translated to huge interest. The Buccaneers' local ratings are up 29% from last season, the biggest year-over-year gain. Cincinnati's 18% gain is second due to Joe Burrow's performance after being the top selection in the draft, followed by Seattle (11%).

Defending Super Bowl champion Kansas City (45.8), New Orleans (41.6) and Buffalo (39.6) are the top-rated local markets. The rating is the percentage of television households tuned in to a broadcast.