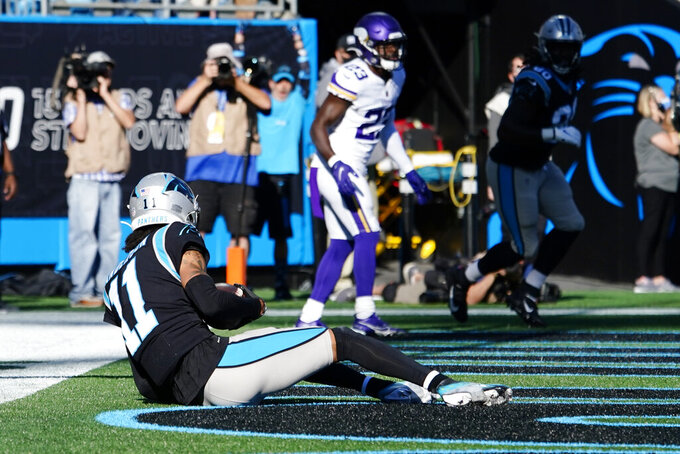 CHARLOTTE, N.C. (AP) — When the Carolina Panthers rewarded Robby Anderson with a three-year, $37.5 million contract extension this offseason, they figured he would be an important and productive part of the offense this season.

But Year 2 in Carolina has been a struggle for the 28-year-old wide receiver.

Through six games, Anderson has been targeted 40 times but only has 15 catches for 190 yards, a significant drop-off last season when he had 40 receptions on 51 targets for 566 yards through the same amount of games.

The 25 non-completed passes to Anderson are the most of any receiver in the league. He didn't help himself last week when he dropped three passes in a 34-28 loss to the Minnesota Vikings. In all, Anderson was targeted 11 times against Minnesota, but was limited to just 11 yards and one short touchdown catch.

Anderson expressed frustration over how he played.

“Yeah, definitely,” Anderson said. “I hold myself to a high regard. And more importantly, a high regard for contributing and helping my teammates. I feel like there were a few plays early in the game I could have made that would have been more beneficial."

Anderson's frustrations came one week after his emotions boiled over on the Carolina sideline. Replay cameras caught him screaming at his wide receivers coach about his desire to run more double-move routes.

Anderson's overall drop in production is perplexing, especially considering he played with new Panthers quarterback Sam Darnold with the New York Jets where they had two years to develop chemistry.

But D.J. Moore, not Anderson, has turned into Darnold's go-to receiver in Carolina.

Panthers coach Matt Rhule coached Anderson at Temple, so he's familiar with his competitive personality — and he said he appreciates it because he knows how badly Anderson wants to win.

Rhule said he wants to see Anderson block out the outside distractions, including some of the criticism he's hearing on social media and focus on the details in practice and in games.

“I think sometimes when we have adversity, and we don’t have the production we want, all of us start trying to look for other things, saying ‘maybe I’ll do this or do that,’" Rhule said. "All of us, as a team, need to go back to the simple things. The fundamentals of getting open and catching the football and blocking and playing hard. The fundamentals of pass-protecting and pass-rushing.

"If we go back to the fundamentals, get the football right, we’re not a bad football team; we’re a good football team. We’re beating ourselves right now. And it’s got to get corrected.”

Anderson had 96 receptions for 1,096 yards and three TDs last season for the Panthers. But he's nowhere near that pace this season, even with an expanded 17-game regular season.

And with the Panthers planning to recommit to the running game moving forward, it's possible Anderson's targets could decrease this Sunday as he returns to the Meadowlands to face the Giants.

The primary reason for Anderson's frustrations is the Panthers are marred in a three-game losing streak after starting the season 3-0, and he feels as if he can do more to help the team win. But it's pretty clear that Anderson doesn't want to be viewed as player who has become content because he's signed a new contract.

In fact, the desire to prove otherwise motivates him even more.

“Things aren’t always going to go in your favor and go how you expect it to, but I definitely don’t not care," Anderson said. "It’s not cool for me, it’s not funny for me to not play to my standard or expectation. So I’m definitely going to go hard this week to get it corrected.”

NOTES: The Panthers placed wide receiver Brandon Zylstra on injured reserve with a hamstring injury and Terrace Marshall Jr. and Alex Erickson are both battling concussions, so rookie wideout Shi Smith could see more action in the passing game.