Pass rush or more picks is question for 49ers at No. 2 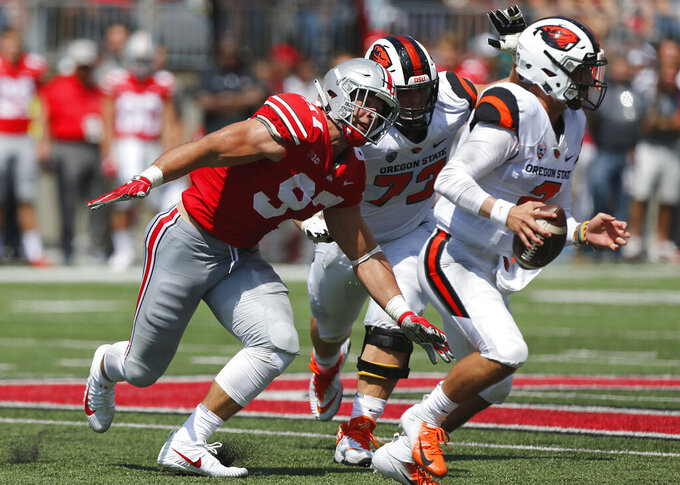 SANTA CLARA, Calif. (AP) — San Francisco coach Kyle Shanahan knows his team can go in one of two directions with the No. 2 overall pick in the NFL draft.

Take the top available pass rusher to help upgrade a defense that struggled to create takeaways last year or move down in the draft and accumulate additional draft picks.

Which direction the 49ers go, remains to be seen.

"You know you're going to get a good player with the second pick, and that really helps your organization for a number of years, having that rookie contract," Shanahan said.

"If you can add anything with a trade that you feel can improve your team more, you don't hesitate to do that. Things come up, and I know they'll continue to come up all the way until draft day. I know we're going to get a good player at No. 2, and if not, it's because we're getting a very good trade at No. 2. It should be a win-win regardless."

The decision on what to do may not be made until after Arizona decides what to do with the top pick. If the Cardinals go ahead and take quarterback Kyle Murray first overall, it might take a mega offer to persuade the Niners to trade down and pass up the top projected defensive end in Ohio State's Nick Bosa or defensive tackle in Quinnen Williams.

But if Bosa ends up going first, the 49ers might be willing to move down and take one of the several other available edge rushers in a deep draft at the position, especially if another team is willing to trade a premium to move up for Murray.

However the draft plays out, the Niners want to get an impact defensive player to team with new pass rusher Dee Ford to improve a defense that set an NFL record for futility with just seven takeaways last season.

"The better your pass rush is, that hides a lot of problems," Shanahan said. "We've been pretty stacked with some inside pass rush, adding an outside pass rush has been of huge importance to us, and it started with getting Dee."

One reason the Niners might be eager to trade down is the fact they have only six picks coming into the draft. San Francisco has no picks in the fifth or seventh rounds, but does have a compensatory pick in the sixth. Shanahan and general manager John Lynch have shown an affinity for moving around in the draft the past two years, trading down from No. 2 in 2017 and then back into the first round to grab Reuben Foster. San Francisco also moved up in the second round last year to take WR Dante Pettis.

CATCH IT WHILE YOU CAN

Finding a receiver will likely be a priority in the draft with the second or third round a likely spot to go in that direction. Pettis showed some positive signs as a rookie and Marquise Goodwin has proven to be an adequate deep threat when healthy.

But San Francisco could use another option in the intermediate game to team with prolific TE George Kittle. Jordan Matthews was signed this offseason, but has had problems with injuries throughout his career and isn't seen as the long-term answer.

San Francisco was expected to be in the running for a starting free safety in free agency, but opted not to get into a bidding war for Earl Thomas and brought back oft-injured Jimmie Ward instead. Adrian Colbert, who showed promise as a seventh-round pick in 2017, struggled last year before being sidelined with a season-ending ankle injury and the team could seek an upgrade.

Richard Sherman played well in his first season in San Francisco, but the other cornerback spot was a problem all year as 2017 third-rounder Ahkello Witherspoon struggled. Injury-plagued Jason Verrett was signed in the offseason, but can't be counted on to stay healthy. Finding a rookie to compete for that spot figures to be a priority and San Francisco also needs to start looking for a replacement down the road for the 31-year-old Sherman.

The Niners lost punter Bradley Pinion in free agency and could be in the market for a new one despite signing Justin Vogel in the offseason. San Francisco would like a punter who can also handle kickoffs since franchise-tagged kicker Robbie Gould hasn't done that in recent years. Stanford's Jake Bailey could be a late-round option, especially if San Francisco is able to add a couple of additional picks to fill other needs.