Patriots' resolve unshaken after falling to 0-4 at home 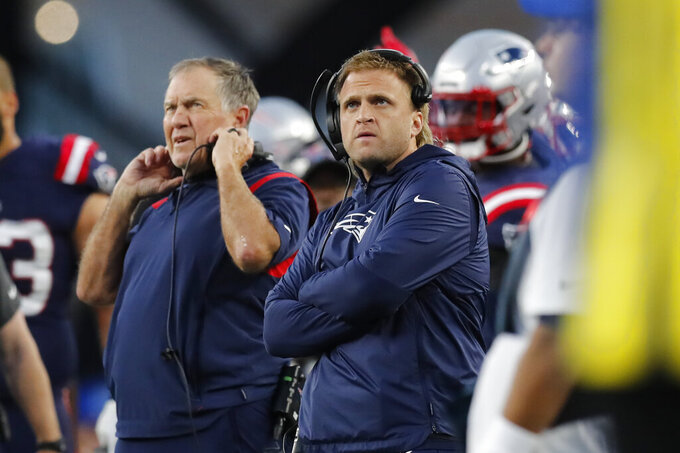 New England Patriots outside linebackers coach Steve Belichick, right, watches a replay with his father, head coach Bill Belichick during the first half of an NFL football game against the Dallas Cowboys, Sunday, Oct. 17, 2021, in Foxborough, Mass. (AP Photo/Michael Dwyer)

FOXBOROUGH, Mass. (AP) — For 60 minutes, the New England Patriots had an answer for nearly everything the Dallas Cowboys threw at them.

But as they trudged off the field following a 35-29 overtime loss on Sunday, they had to confront the reality that they're not quite good enough to beat one of the league's elite teams.

New England fell to 2-4 for the second straight season since Tom Brady's departure.

“When you look at the big picture, you never want to say you’re close, and it’s hard to do that, but the games that we’ve lost we’ve been two or three plays away,” said rookie quarterback Mac Jones, who finished 15 of 21 for 229 yards, two touchdowns and an interception. “I guess it’s just how the NFL works, and I’m learning that the hard way.”

The Patriots fell to 0-4 at home for the first time in coach Bill Belichick's 22 seasons.

“We just came up a little bit short,” Belichick said. “We went toe to toe with them for 60 minutes. ... They just made a few more plays than we did.”

The Patriots had positive moments.

The defense forced a fumble on the goal line, held the NFL's second-ranked offense to 10 points in the first half, and limited a rushing attack that came in averaging 173 yards per game to 122.

Damien Harris rushed for 101 yards and score, his second 100-yard game of the season. Jones also bounced back from a fourth-quarter pick-six to throw a 75-yard, go-ahead touchdown pass to Kendrick Bourne.

Yet many of the same issues that have contributed to New England going 1-3 in one-score games this season persisted.

The offense was 3 of 9 on third down. Jones had two turnovers that led to 10 Dallas points, first coughing up the ball on a strip-sack and then throwing the interception to Trevon Diggs as his team was trying to protect a one-point lead late in the fourth quarter.

New England's defense was gassed after spending 39 minutes on the field, and that allowed Cowboys quarterback Dak Prescott to hold the ball longer and get outside the pocket to extend plays.

According to NFL NextGen Stats, Prescott averaged his longest time to throw (3.05 seconds) in a game over the last two seasons, completing 24 of 36 passes for a career-high 365 yards when he held onto the ball for 2.5 seconds or longer. He also went 9-for-11 for 171 yards when he ventured outside the pocket.

Safety Devin McCourty had little explanation for his team's failures at home.

“It just is what it is. We are the 2021 Patriots who haven’t won at home,” McCourty said. “We just had to make a few plays at the end. It’s not like we’re coming in here at home and have no shot to win. All of these games, even the Saints game, it came down to a couple of plays that we’re not finishing and we’re falling short.”

The first step in finding a way to correct the issues is acknowledging deficiencies and attacking them, center David Andrews said.

“I think you can learn a lot from things. We’ve just got to keep moving forward,” he said. “There was some good in the game. There’s obviously not enough good to win the game, so we’ve just got to move on and go back to work.”