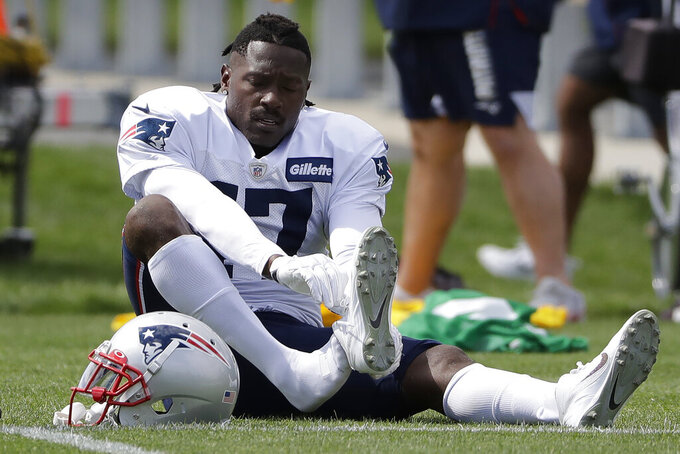 FOXBOROUGH, Mass. (AP) — Patriots receiver Antonio Brown declined to answer questions about allegations of sexual assault and rape against him and says he's keeping his focus on football.

Brown answered only four questions at his locker on Thursday in an interview that lasted just over a minute. It was his first interview with reporters since agreeing to a deal with the Patriots on Sept. 7.

He twice declined to answer questions about the civil case filed against him in South Florida by former trainer Britney Taylor, who claims Brown sexually assaulted her on three occasions, including rape, in 2017 and 2018. He also declined to say whether he's heard from the league about the allegations.

He has previously denied the allegations by Taylor.

Sports Illustrated also reported this week that a second unidentified woman has alleged that Brown exposed himself to her while she was working on a mural for him at his Pittsburgh home in 2017. Brown has also denied that allegation.

Asked if he was currently in good standing with the league and available to play on Sunday when New England hosts the New York Jets, Brown responded that he was "super grateful to be here to play for Bill Belichick and Tom Brady."

"I got a lot of the offense to learn and catch up on," he continued. "But I'm excited and grateful to be here and be a part of these guys."

After responding that it was "a tremendous honor" to a question about working with Brady, Brown was asked what the process of acclimating to the Patriots has been like with everything going on in his life. Again, Brown deferred to football.

"It's football," he said. I'm grateful to play football. Every time you walk in the doors here you know (to) be your best for the team. So every time I walk in here, I just want to make sure I'm preparing to give these guys my best."

Asked a final time if he's heard anything from the NFL about his availability, Brown said, "I appreciate that question. I'm just here to focus on ball and look forward to get getting out there and playing and being with the team."

Two people with knowledge of the investigation into Brown told The Associated Press that one of the accusers has met with NFL investigators and that there is no timetable for concluding the probe.

Brown practiced with the Patriots in the aftermath of Taylor's lawsuit becoming public and scored a touchdown in his debut against the Dolphins. He's also been on the field for both of the Patriots' practices this week.

Two sources told The Associated Press that Brown was not placed on the commissioner's exempt list last week and was eligible to play against Miami because no criminal charges had been filed against him and because the NFL hadn't fully developed its investigation.