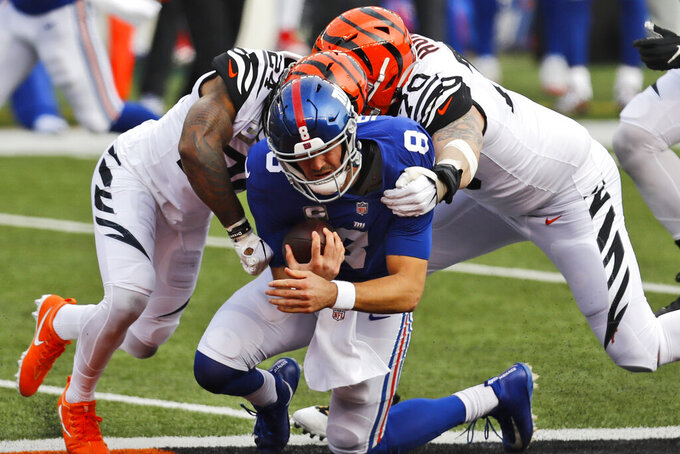 CINCINNATI (AP) — After the New York Giants lost their starting quarterback, they held off a late rally by the Joe Burrow-less Cincinnati Bengals.

Daniel Jones went out with a hamstring injury in the second half of New York's 19-17 win on Sunday. The Giants' third straight victory put them at 4-7 after they lost the first five under new coach Joe Judge. New York moved into a first-place tie with Washington in the woeful NFC East.

When or if they'll have Jones back is the looming question. He's scheduled to have an MRI on Monday.

“I won’t say I’m optimistic at this point right now," Judge said. “No, I don’t want to go ahead and say yea or nay because I don’t have the medical information. You know, I’m sure he’s going to try everything he can.”

Jones went down after completing a short pass in the third quarter with the game tied at 10. He returned for two plays on the next series but then was relieved by backup Colt McCoy, who played the rest of the game.

“I’m certainly not discouraged," Jones said. "You know, I think it’s tough to tell exactly what it is right now.”

Wayne Gallman Jr. ran for a 2-yard touchdown on fourth-and-goal in the first quarter, and Graham Gano returned from the COVID-19 list to kick four field goals for the Giants.

Brandon Allen, who was promoted from the practice squad, started at quarterback for the Bengals (2-8-1) in place of the dynamic Burrow, who suffered a season-ending knee injury in last week’s loss to Washington.

Allen couldn't keep the Bengals moving. He was 17 for 29 for 136 yards, and Cincinnati mustered just 155 total yards of offense. It wasn't all his fault: Passes were dropped, and with Joe Mixon on injured reserve, the Giants didn't have to worry about a Cincinnati running game. The Bengals went three-and-out four times and killed drives by fumbling twice.

Nonetheless, the Bengals had a chance late. A 1-yard touchdown pass from Allen to Tee Higgins — set up by a pass-interference penalty in the end zone — got them within two points with 2:33 remaining.

Cincinnati got the ball back, but Allen fumbled while being sacked with 57 seconds left to seal it for the Giants.

“We never got our rhythm, our first-down efficiency is really where it got us," Cincinnati coach Zac Taylor said. "We were in a lot of second-and-8s, second-and-9s, second-and-10 it felt like, and that’s not a great recipe against that defense.”

One of the few Bengals highlights came in the first quarter after Gallman scored, set up by a 53-yard pass from Jones to Evan Engram.

On the ensuing kickoff, Brandon Wilson took the ball 3 yards deep in the end zone, found a seam in the middle and rumbled for a 103-yard touchdown, the longest in franchise history.

Before he departed with the injury, Jones was 16 for 27 for 213 yards. Engram caught six passes for 129 yards.

“I don’t think you can compare this year to any other year," Judge said. “However, I am proud of our players, of the way our players are working. I’m proud of the improvement they’ve made. I’m proud of how they come to work every day.”

Gallman's first-quarter score gave him a TD in five consecutive games, the longest streak for New York since Saquon Barkley scored in five straight games in 2018. Gallman, who secured the starting job after Barkley and Devonta Freeman went out with injuries, scored three total touchdowns in his first three seasons. He had 24 carries for 94 yards against the Bengals.

Despite the lackluster day by Allen, Taylor said he'll stick with him as the Bengals' starter. Allen had started three previous NFL games, all last season at Denver, and was brought up from the practice squad after Burrow got hurt. He leapt into the starting role over Ryan Finley, who had been Burrow's backup.

“I’ve been around Brandon — I thought he gave us a chance," Taylor said. “He’s a good decision-maker. Not everything was perfect, we knew there was going to be some challenges. We needed the guys around him to lift him up and help him through this week, and we didn’t get enough of that to be quite honest.”

Giants: S Nate Ebner left the game in the first quarter with a knee injury and was ruled out. LB Kyler Fackrell was ruled out with a calf injury.

Bengals: G Alex Redmond was ruled out with a concussion early in the second half. Cincinnati was without two coaches because of COVID-19 issues: defensive line coach Nick Eason and secondary/cornerbacks coach Steve Jackson.

Giants: at Seattle next Sunday.

Bengals: at Miami next Sunday.