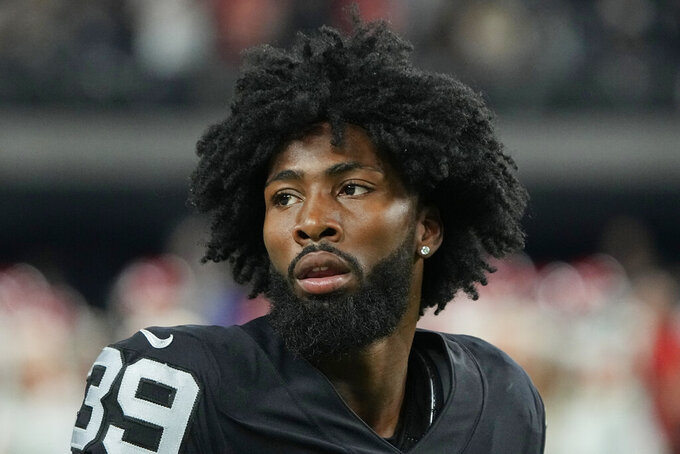 FILE - Las Vegas Raiders cornerback Nate Hobbs warms up before an NFL football game against the Kansas City Chiefs, Nov. 14, 2021, in Las Vegas. Hobbs resolved a misdemeanor speeding case Monday, May 2, 2022, with his attorney entering a no-contest plea on his behalf and paying a $250 fine. (AP Photo/Rick Scuteri, File)

Hobbs, 22, did not appear in court with his attorney, Richard Schonfeld, for the brief hearing stemming from Hobbs’ arrest Jan. 16 on a Las Vegas-area freeway.

A Nevada Highway Patrol trooper had ticketed Hobbs for reckless driving, reporting that he clocked Hobbs’ vehicle at 110 mph (177 kph) in a 65 mph (105 kph) zone.

The case was the second in a month involving Hobbs, one of several current and former Raiders players to face charges in driving cases.

Hobbs had been arrested before dawn Jan. 3 when he was found asleep inside a vehicle at a Las Vegas Strip casino parking garage. Prosecutors in that case said Hobbs’ blood-alcohol level was just under the DUI legal limit in Nevada of 0.08%.

Hobbs pleaded guilty to misdemeanor careless driving, paid a $685 fine and was ordered to perform 20 hours of community service.

In November, former Raiders receiver Henry Ruggs III was involved in a high-speed crash that killed a 23-year-old Las Vegas woman while Ruggs was allegedly driving drunk. Authorities said Ruggs and his girlfriend were injured. The Raiders released Ruggs hours after the wreck.

A preliminary hearing of evidence in that case is scheduled June 16.