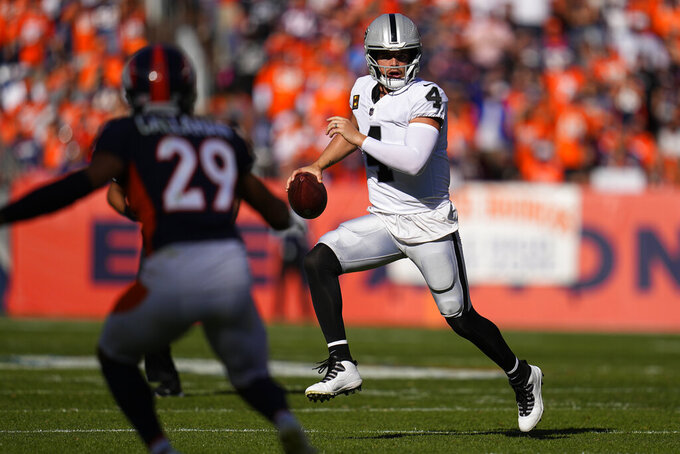 The offense for the Las Vegas Raiders had a different look in the first game without Jon Gruden, and the changes paid for at least the first week.

New play caller Greg Olson utilized more play-action, allowing Derek Carr to hit some more big plays that had been lacking the previous two games when the offense stalled, leading the Raiders to a 34-24 win Sunday over the Denver Broncos.

While the foundation of the offense is still what Gruden installed in the offseason, Olson put his own twist on it against the Broncos.

“The advantage to us, this is the first game ‘Oly’ called in a while,” interim coach Rich Bisaccia said. “They were trying to figure out what we were going to do. ... I thought we ran the ball better. A little bit more play-action look to us today and we moved Derek out of the pocket. Offensively those guys did a great job with that, so it was fun to watch again.”

The Raiders more than doubled their play-action rate with Olson calling plays, using it on a season-high nine drop backs, according to Pro Football Focus.

That helped open the deep game as Carr averaged 18.9 yards per completion for the highest rate for a Raiders QB in 10 years. He gained 219 yards on passes thrown at least 15 yards downfield, according to Sportradar, for the third most in a game in his career.

Carr got things started with a 48-yard TD pass to Henry Ruggs III on the opening drive to end an 11-game drought without points on the first drive. He also threw a 31-yard TD pass to Kenyan Drake and had a 51-yard pass to Bryan Edwards that helped put the game away in the fourth quarter.

It added up to the most efficient day on offense for the Raiders in nearly a quarter-century with their 8.19 yards per play doubling the rate of the final two games under Gruden, and were the most for the team in a game since Sept. 14, 1997, against Atlanta (9.20).

“For us, we are always looking to push the ball down the field," Carr said. “We always believe we can do that.”

Pass rush. The Raiders put heavy pressure on Teddy Bridgewater and had their first five- sack day since 2019. Maxx Crosby was involved in all of them, getting one solo sack and splitting the other four to give him credit for three on the day. Quinton Jefferson split two of the sacks, Cory Littleton was in on one and Damion Square shared the other. Crosby's five sacks on the season are the most for a Raiders player through six games since Richard Seymour had five in 2011.

Running game. Las Vegas still failed to generate any consistent running game even against a banged-up Denver front seven. The Raiders finished with 86 yards on 23 carries, with Josh Jacobs being held to 53 on 16 attempts. Jacobs has played four games this season and has failed to average 3.5 yards a carry in any of them. He's the first Raiders player since Tyrone Wheatley in 2000 to have four straight games with at least 10 carries and less than 3.5 yards per carry.

There were some questions raised when the Raiders gave Drake an $11 million, two-year deal in the offseason and they only got louder when he made little impact the first five games. Drake had just three touches on offense the previous two weeks but made the most of his 12 snaps on Sunday.

He caught the TD pass late in the first half and then broke it open with an 18-yard TD run in the third quarter, becoming the first Raiders player with a TD catch and a TD run in the same game since Darren McFadden against the Bills in 2011. Drake finished with four carries for 34 yards and two catches for 39 yards.

Amik Robertson. The 2020 fourth-round pick was forced into a starting role the past two weeks because of injuries to Trayvon Mullen and Damon Arnette. Robertson didn't last long on Sunday, playing only 13 snaps after allowing three catches on three targets for 44 yards and a TD while also missing two tackles, according to Pro Football Focus.

Brandon Facsyon, signed earlier this month off the Chargers' practice squad, played well in Robertson's place and had an interception.

Raiders LB Nick Kwiatkoski (foot) and S Roderic Teamer (shoulder) dealt with injuries during the game but Kwiatkoski was able to return.

25 — The Raiders had seven pass plays gain at least 25 yards, becoming the first team since at least 1991 to do that in a game, according to Sportradar. Their previous high was four in 2012 against Atlanta, and no team had even had six in a game since Detroit did it against the Bears in 2015. The big plays were spread around with Ruggs getting two, and Drake, Jacobs, Edwards, Darren Waller and Hunter Renfrow all getting one.