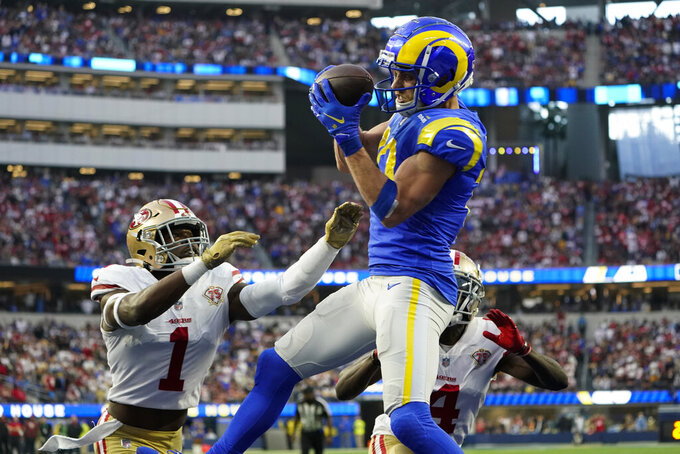 TURNOVER DIFFERENTIAL: 49ers minus-4; Rams plus-2.

49ERS PLAYER TO WATCH: WR Deebo Samuel. The Niners' offense revolves around Samuel either as a receiver or a runner. Samuel has 1,963 yards from scrimmage in the regular season and playoffs, with 1,487 yards receiving and 476 yards on the ground. Samuel is averaging 6.0 yards per carry and 17.9 yards per reception, and has scored 15 TDs on the season. Samuel has also thrown a TD pass and returned a kick last week for 45 yards to set up a score.

RAMS PLAYER TO WATCH: DT Aaron Donald. The most dominant defensive player of his era was moved to tears by the Rams' playoff loss in Green Bay last year. Late in his eighth NFL season, the seven-time All-Pro realizes the opportunities to win a ring dwindle each year, and his teammates say they're playing for No. 99. After making a minimal impact on the Rams' first two meetings with San Francisco this season (no sacks, one QB hit, three tackles for loss), Donald can help his cause by slowing the 49ers' solid rushing attack and generating pressure on QB Jimmy Garoppolo.

KEY MATCHUP: LA offensive line against SF defensive line. San Francisco's secret to success against Matthew Stafford this season has been seven men in coverage and a four-man defensive front somehow still creating pressure. The Niners have blitzed on just 14% of the Rams' plays, but have still generated pressure on Stafford on 41% of the passing downs — with the front four winning its battles with LA's protection schemes. Stafford excels against blitzes, but he needs time and space to get the ball downfield consistently against thick coverage shells.

KEY INJURIES: Niners All-Pro LT Trent Williams’ status is in doubt after he sprained his ankle last week. Williams missed the Week 18 game against the Rams but coach Kyle Shanahan said he expects Williams to play. ... Backup RB and special teams player Jeff Wilson Jr. also had been sidelined during the week with an ankle injury. ... CB Ambry Thomas is set to return after missing one game with a knee injury. ... Rams LT Andrew Whitworth is expected to return from a knee injury, while his backup, Joseph Noteboom, has missed practice with a pectoral injury. ... Rams WR Van Jefferson hopes to play through a knee issue.

SERIES NOTES: San Francisco has won its last six meetings with Los Angeles in the longest winning streak in this rivalry since the Rams won six straight from 1999-2001. ... The teams met only three weeks ago at SoFi Stadium, and the 49ers' overtime victory clinched their playoff berth. ... Garoppolo and Samuel are among several Niners who have never lost to the Rams. ... They've met once previously in the postseason. Joe Montana's 49ers routed the Rams 30-3 in the NFC title game in January 1990 at Candlestick Park. San Francisco went on to another romp in the Super Bowl, 55-10 over Denver.

STATS AND STUFF: The fourth-seeded Rams beat Arizona at home and Tampa Bay on the road to reach the NFC title game for the second time in four seasons. The sixth-seeded Niners won at Dallas and at top-seeded Green Bay to make their second conference title game in three years. ... The 49ers have made the NFC championship game the last five times they made the playoffs. San Francisco’s 17 appearances since the merger are the most in the NFL. ... The Niners are seeking their eighth Super Bowl appearance, and the Rams are going for their fifth. ... San Francisco will be the first team in NFL history to play 12 road games in a season, playoffs included. Their eight road wins are tied for fourth most behind the 2007 Giants (10), the 2020 Buccaneers (9) and the 2005 Steelers (9). ... The Niners are looking to become the first team since Kansas City in the 1966 season to win road games in four consecutive weeks. ... The 49ers scored TDs on a league-high 73.8% of red-zone trips the first 14 games of the season, compared to 37.5% the past five games. ... Garoppolo has two INTs, and no TD passes or runs in two playoff games this season. ... San Francisco DE Nick Bosa’s 6 1/2 sacks are tied for second most in franchise history in the postseason, one behind Hall of Famer Charles Haley’s record. ... Niners K Robbie Gould is 20 for 20 in his playoff career on FGs and 32 for 32 on extra points. His 20 made FGs without a miss are the most in playoff history, and his 20 straight makes are third most, trailing Mason Crosby (23) and Stephen Gostkowski (22), according to the Elias Sports Bureau. ... The 49ers last week became the first team to block a field goal and punt in the same playoff game since Buffalo did it against Houston on Jan. 1, 1989. ... Sean McVay is the winningest coach in Rams postseason history after getting his fifth victory last week. ... The Rams are the first team to host a conference title game at the site of the Super Bowl. With a win, Los Angeles would join last season's Buccaneers as the only teams to play a Super Bowl in their home stadium. ... Stafford and WR Odell Beckham Jr. got their first two playoff victories this month. Stafford has been sharp in his first two playoff games with the Rams, completing 74.5% of his passes without an interception while throwing for 570 yards and four TDs. ... All-Pro WR Cooper Kupp followed up his receiving triple crown in the regular season with a career-high 189 yards receiving last week in Tampa. ... Donald led the Rams in the regular season with 12 1/2 sacks and has added 1 1/2 sacks in the playoffs. ... Super Bowl 50 MVP Von Miller is on a roll with his new team, getting seven sacks and 15 tackles for loss in his 10 games with the Rams.