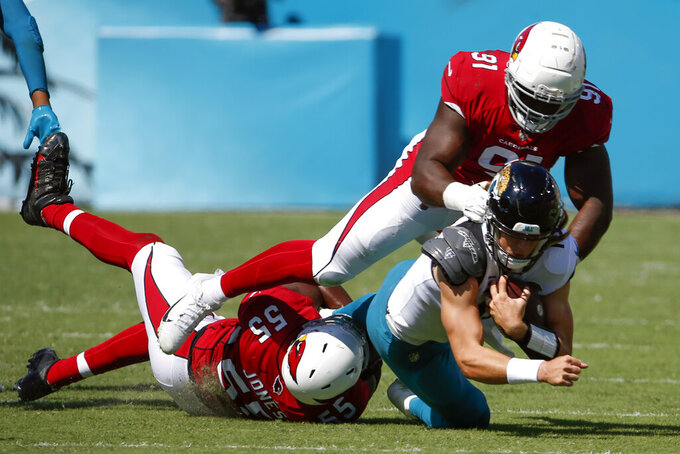 OPENING LINE: Rams by 6, according to FanDuel SportsBook.

TURNOVER DIFFERENTIAL: Cardinals plus-3; Rams plus-2.

CARDINALS PLAYER TO WATCH: WR DeAndre Hopkins has three touchdown catches, but has yet to put up big production to go with it. He ranks 52nd in the NFL in yards receiving (158) and is tied for 47th in receptions (13). A lack of big plays is the culprit: Hopkins has one reception longer than 20 yards, and that trend could continue this week against a secondary led by Jalen Ramsey.

RAMS PLAYER TO WATCH: QB Matthew Stafford has been nothing short of sensational in his first three games with Los Angeles, having thrown for 942 yards and nine touchdowns against one interception. Coach Sean McVay made the blockbuster trade for Stafford because of an inability to stretch the field vertically in recent seasons under Jared Goff, and the ex-Detroit signal caller has delivered 12 pass plays longer than 20 yards while averaging 10 yards per attempt.

KEY MATCHUP: Cardinals QB Kyler Murray vs. Rams DL Aaron Donald. Murray has struggled with the Rams’ ferocious pass rush, taking 11 sacks in four previous meetings. In the three games Murray played from start to finish, he completed 57.4% of his throws for 661 yards and five touchdowns against four interceptions. Donald’s relentless pressure has been a main reason for Murray’s struggles, posting 2 1/2 takedowns of the 2019 first overall draft pick among his franchise record-tying 87 1/2 sacks.

SERIES NOTES: The Rams have won eight straight games in the series, all under McVay. … Arizona’s last win came in a 44-6 rout at the Los Angeles Memorial Coliseum on January 1, 2017. McVay was hired 19 days later. … Los Angeles had scored 30 or more points in seven straight matchups before a battle of backup quarterbacks produced a grinding 18-7 outcome in the final regular-season game of 2020.

STATS AND STUFF: Rams WR Cooper Kupp leads the league in receptions (25), yards receiving (367) and touchdown receptions (5). He needs 169 yards to tie the NFL record for most receiving yards through four games; Henry Ellard had 536 yards for Washington in 1994. … Arizona is the only team to score 30 or more points in its first three games. … Los Angeles is 40-0 when leading at halftime under McVay. … Cardinals LB Chandler Jones (66) needs one sack to pass Freddie Joe Nunn (66 1/2) for most in franchise history. … Rams WR DeSean Jackson caught a 75-yard touchdown pass from Stafford against the Buccaneers, his 10th career score covering at least 75 yards. ... Stafford has faced the Cardinals eight times in the past nine seasons, going 3-4-1 with Detroit. ... Cardinals LB Devon Kennard and Rams WR Robert Woods were teammates at USC. ... Cardinals receivers coach Shawn Jefferson is the father of Rams WR Van Jefferson.

FANTASY TIP: With fireworks all but certain between two of the best offenses in football, this should be the time for Rams WR Robert Woods to shake off a slow start. Woods has averaged 7.1 receptions and 80 yards in eight career games against the Cardinals, including his career-high 172 yards on 13 grabs in December 2019.