Ravens seeking 5th straight win when they play at Jaguars 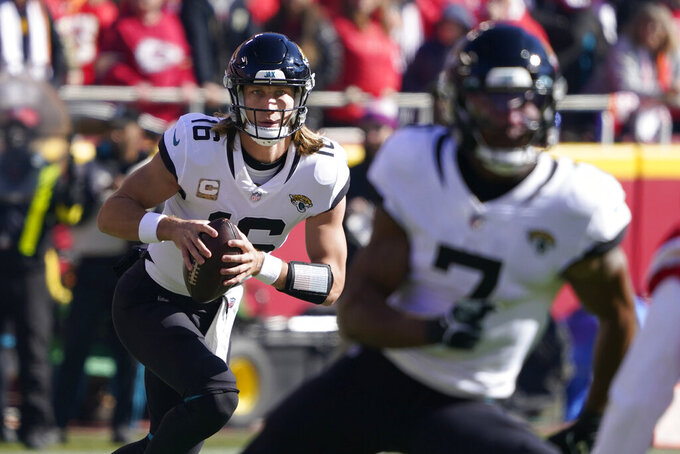 Jacksonville Jaguars quarterback Trevor Lawrence (16) drops back to pass during the first half of an NFL football game against the Kansas City Chiefs Sunday, Nov. 13, 2022, in Kansas City, Mo. (AP Photo/Ed Zurga)

TURNOVER DIFFERENTIAL: Ravens plus-9; Jaguars plus-1.

RAVENS PLAYER TO WATCH: WR Demarcus Robinson had a career-high nine catches for 128 yards last week against Carolina, his most productive showing of the season. With Rashod Bateman out (foot), Robinson could help fill Baltimore’s biggest hole.

JAGUARS PLAYER TO WATCH: ILB Devin Lloyd was benched in consecutive games, replaced for at least a series by fellow rookie Chad Muma. The 27th pick in April’s draft, Lloyd was the league’s defensive rookie of the month in September. But he has struggled of late and could be close to surrendering his starting spot to Muma.

KEY MATCHUP: Jacksonville vs TE Mark Andrews, who leads the Ravens with 48 catches for 551 yards and five TDs. Andrews caught five passes for 66 yards and a score in his only game against the Jaguars, who have allowed two tight ends – Kansas City’s Travis Kelce and Indy’s Jelani Woods -- to find the end zone this season.

SERIES NOTES: The teams have alternated wins and losses the last nine meetings, beginning with Baltimore’s victory in 2003. ... They began as AFC Central rivals in 1996, with Jacksonville winning the first eight games and Baltimore following with six in a row. ... Most of the games in Jacksonville have been close, with seven of nine decided by five points or less.

STATS AND STUFF: The Ravens have won four in a row. ... Baltimore has built a double-digit lead in every game this season and hasn’t trailed by double digits. The only other teams to accomplish that feat through the first 10 games of a season were the 1942 Chicago Bears and the 1984 Miami Dolphins. ... Baltimore is second in the league with 19 takeaways and has allowed a 32.8% success rate on third downs, which also ranks No. 2 in the NFL. ... Ravens K Justin Tucker has made 65 consecutive FG attempts in the fourth quarter and OT. ... Jackson is one rushing TD shy of 25 for his career. That would make him the third QB in NFL history to reach 100 passing TDs and 25 rushing TDs, joining Buffalo’s Josh Allen and former Carolina star Cam Newton. ... Ravens DL Calais Campbell is sure to get a warm reception in Jacksonville. Campbell was a team captain and Pro Bowl selection for three years (2017-19) before the Jaguars traded him to Baltimore, making him the first Walter Payton Man of the Year to get dealt before the following season. Campbell compiled 195 tackles, including 31½ sacks, with Jacksonville and helped the team reach the AFC championship game. ... Jaguars RB Travis Etienne is averaging 5.9 yards a carry in his last five games, good for third among running backs during that span. ... Jaguars QB Trevor Lawrence has completed 54 of 71 passes for 494 yards and three TDs, amassing a 108.5 rating. His rating since Week 9 is the fifth highest in the NFL during that span. ... Jacksonville leads the league with 61 passes defended. ... The Jags have outscored opponents 54-23 in the third quarter. Their 31-point differential in the third is fifth in the NFL through Week 11.

FANTASY TIP: Andrews and Jackson are must-starts for the Ravens. Jaguars WR Christian Kirk is Lawrence’s favorite target and is tied for third in the AFC with seven TD catches. Etienne has been one of the best backs in the league in recent weeks, but could find little room against a defense stout against the run.