Ravens try to rebound from loss against struggling Broncos 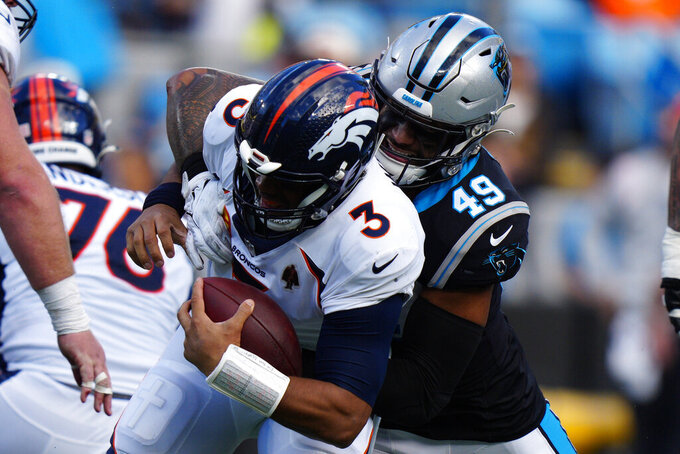 TURNOVER DIFFERENTIAL: Broncos minus-1, Ravens plus-8.

BRONCOS PLAYER TO WATCH: QB Russell Wilson has just eight touchdown passes this season and has struggled all season adapting to a new city, team and head coach. He insists he hasn’t lost any confidence, but it was clear last week that there was no swagger in the quarterback behind a patchwork offensive line and a group of replacements at receiver and running back.

RAVENS PLAYER TO WATCH: DL Calais Campbell needs one more sack to reach 100. He has 5 1/2 on the season and is part of a Baltimore pass rush that has at least three sacks in seven straight games. The 36-year-old Campbell, a Denver native, has 4 1/2 sacks in his past five games.

KEY MATCHUP: Broncos D-line vs. Ravens QB Lamar Jackson. The Broncos sorely miss Bradley Chubb, whom they traded to the Dolphins at the deadline. Since his departure, they have just two sacks in three games and they’ve allowed 100-yard rushers each of the past two weeks. Also, Dre’Mont Jones, their best lineman, was sick and missed practice time early in the week.

KEY INJURIES: Denver WRs Jerry Jeudy (ankle) and KJ Hamler (hamstring) have been slow to recover from injuries, having missed the past two games. Juedy returned to practice Friday along with CB K’Waun Williams (wrist/elbow/knee) and both are listed as questionable for Sunday. So is WR Courtland Sutton, who missed Friday's practice with a stomach bug, coach Nathaniel Hackett said. Four players were ruled out: Hamler, DL Jonathan Harris (knee), TE/FB Andrew Beck (hamstring, illness) and LB Dakota Allen (hamstring). Also, K Brandon McManus was added to the injury report Friday with discomfort in the thigh on his kicking leg, although Hackett said he should be fine. ... Jackson was dealing with a quad issue this week, but was able to participate in practice for the Ravens. S Kyle Hamilton (knee), T Ronnie Stanley (ankle) and TE Isaiah Likely (ankle) did not play last week. T Patrick Mekari missed practice time this week because of an illness.

SERIES NOTES: The biggest game between these teams came in the postseason on Jan. 12, 2013, when the Ravens beat the top-seeded Broncos 38-35 in double overtime, propelling Baltimore toward a Super Bowl title. Peyton Manning threw for seven touchdowns in a 49-27 rout of the Ravens in the 2013 opener eight months later, kickstarting the Broncos’ run to Super Bowl 48. ... Baltimore won at Denver 23-7 last season.

STATS AND STUFF: The Broncos have lost seven of eight since starting the season 2-1. Their previous win on American soil came on Sept. 25, 11-10 over the 49ers. ... Denver is 1-5 on the road with that sole victory coming over the Jaguars at Wembley Stadium in London on Oct. 30. ... Wilson, who turned 34 on Tuesday, is on pace to get sacked a career-high 56 times. ... Seven of Wilson’s eight touchdown passes have come on the road. ... Wilson’s only start against the Ravens came on Dec. 13, 2015, and he threw for five touchdowns and no interceptions. ... Denver RB Latavius Murray rushed for a season-best 92 yards last week. He had 113 yards and a touchdown in his previous game against Baltimore on Oct. 22, 2017, while with the Vikings. ... WR Courtland Sutton led the Broncos with six catches for 75 yards last week. ... WR Kendall Hinton tied his career high with five receptions against the Panthers. ... WR Brandon Johnson caught his first career touchdown pass last week and it was Wilson’s 300th career TD toss. ... Denver ILB Josey Jewell is coming off a game in which he had eight tackles and his second forced fumble of the season. He averages 10.3 tackles per game on the road. ... S Justin Simmons led the Broncos with nine tackles last week. ... Baltimore had a four-game winning streak snapped last week. ... Jackson needs one rushing TD to reach 25 for his career. He'd join Josh Allen and Cam Newton as the only QBs in league history to achieve 100 TDs passing and 25 rushing in the first five seasons of a career. ... The Ravens have forced a turnover in 13 consecutive games. Only Philadelphia (23) has more takeaways this season than Baltimore's 20. ... Justin Tucker needs five points to catch Matt Stover (1,464) for No. 1 in Ravens history. He is four field goals behind Stover (354) on that list. ... Baltimore has held opponents under 50 yards rushing in four straight games, tying a record for longest streak in a season since the 1970 AFL-NFL merger.

FANTASY TIP: While Mark Andrews is obviously Baltimore's top TE, Josh Oliver had four catches for 76 yards and a touchdown last weekend, and he could remain a factor given injuries to other Ravens pass catchers.