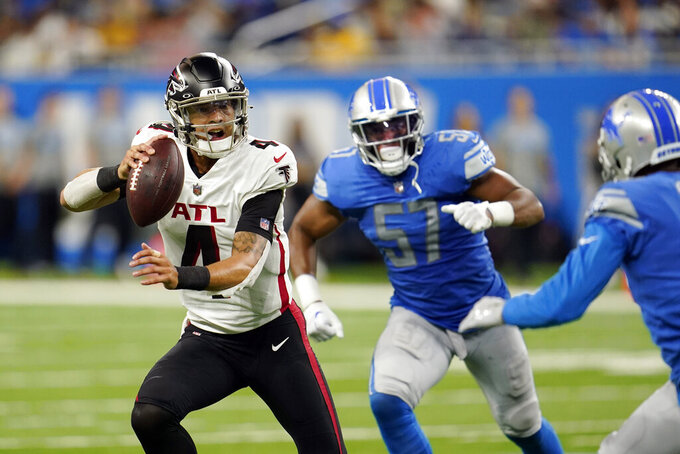 DETROIT (AP) — Rookie quarterback Desmond Ridder threw a 21-yard touchdown pass to Jared Bernhardt with 1:30 left to give the Atlanta Falcons a 27-23 win over the Detroit Lions on Friday.

The Lions took a 23-20 lead on Riley Patterson's 28-yard field goal with 5:57 to play, then forced Atlanta into a three-and-out. Detroit quarterback David Blough, though, fumbled at his 33 with 2:00 left.

Facing fourth-and-9 from the 21 with 1:37 left, Atlanta coach Arthur Smith decided to avoid a tie and give Ridder a chance to win the game.

“There was no way we were going to kick — no one wants a tie," he said. “We were going to try to make a play and try to win. I don't think Joe Gibbs and Tony Dungy went to the Hall of Fame on their preseason records.”

“(Boswell) apologized after the play for not running a great route,” Smith said. “I told him not to worry about it — he won us the game.”

Ridder replaced Marcus Mariota after one drive and finished 10-for-22 for 103 yards and two touchdowns. He also rushed six times for 59 yards, as Atlanta put up 168 yards rushing and just 139 passing.

Lions quarterbacks Tim Boyle and Blough, competing for the No. 2 job behind Jared Goff, both struggled. Boyle was 9-for-16 for 111 yards, a touchdown and an interception. Blough was 18-for-28 for 141 yards, but had a pass deflected and nearly intercepted in his own end zone with 3:42 left before his late fumble.

“We certainly wish we could have finished that off, but we did get a good look at our guys in different situations,” Lions coach Dan Campbell said. “I was pleased with the way our offense started the game.”

The Lions have lost their past nine preseason games. Their previous win came on Aug. 24, 2018, in Tampa Bay.

Falcons: WR Drake London, the eighth overall pick in this spring's draft, sustained a knee injury on the game's first series and did not return. Smith said they won't have an update on London until this weekend.

Lions: S Will Harris left the game on the first series with a hand injury and didn't return.

Defensive end Aidan Hutchinson was a familiar sight for Detroit football fans even before the Lions picked him with the No. 2 pick in April's draft. Hutchinson was a star for Michigan last season in their first run to the College Football Playoff, and he made a quick impact in his NFL debut.

On his first two plays, he knocked Marcus Mariota out of bounds after a 7-yard gain, then stopped running back Qadree Ollison for a 2-yard loss on second down. Two plays later, he drew a holding penalty on Chris Lindstrom.

Both first-team offenses started the game with touchdown drives, taking up all but 31 seconds of the first quarter. D'Andre Swift scored after a 10-play Detroit drive and Mariota scrambled in from 6 yards to conclude a 12-play Falcons possession.

“It was good to see us answer their touchdown on our first possession, but we didn't really need to see Marcus running that much (three carries for 23 yards),” Smith said. “But I'd rather have guys like him — the ones you have to hold back in the preseason — than the others you have to push forward.”

Last season, the Lions' first-choice offensive line — LT Taylor Decker, LG Jonah Jackson, C Frank Ragnow, RG Halapoulivaati Vaitai and RT Penei Sewell — never made it onto the field for a regular-season snap. They started on Friday, which led Goff to give up his planned week off.

“I heard those guys were finally going to be out there, and I didn't want them out there without me,” said Goff, who requested to play after learning he wasn't scheduled to be active. “We got out there, scored a touchdown and did it swiftly. It always feels good to do that against another team.”